I have worked for the SF Bay View newspaper for the last seven years and, during that time, I have learned a lot and met a lot of intelligent, creative and dedicated people – many older and some younger. Out of the young writers, Ebony Colbert Sparks, is definitely one of the most talented writers that I had met since I considered myself a writer.

Her stories always flowed, she chose interesting topics and her articles were always thoroughly researched. I also came to admire how she perfected her talent in the midst of having two – now three – children and a husband and trying to maintain a household. She is the personification of “you can do anything you put your mind to.”

Since she left the Bay View, she has been involved in a number of literary projects; the biggest one, which has recently been released, is the autobiography of Frisco street and rap legend Herm Lewis, “Lessons Learned: Experiences of a Hunters Point Street Soldier.” It is hood literature but not written in the flowery, unrealistic tone that Black romance novels are written in.

Ebony wrote a dope story filled with the realities of growing up Black in one of the most notorious hoods in San Francisco, Hunters Point. I’m not going to say too much more about her and Herm’s newest accomplishment; you’re are going to have to buy the book. Now check her out as we get updated on what her life has been like after working at the Bay View …

MOI JR: Can you describe your new book with Herm? How long did it take y’all to make it? 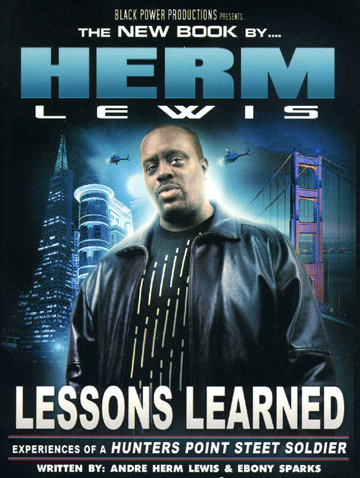 Ebony: The new book, “Lessons Learned …,” is an autobiography of Herm Lewis. It chronicles his life from childhood ‘til today and touches on significant changes he’s been through. We talk about his growing up with his brothers and sisters with a single mom, getting into hustling, then drug abuse, going to prison and then getting into the music industry.

It also has some information on certain people in the industry that most people don’t know. It took us less than a year from the time we first started talking about the book to print.

MOI JR: What was the creative process like? How many times did y’all hook up? And what did y’all do on those days?

Ebony: Herm would come see me every week with a stack of notebook paper. He would write about certain situations or people and I would start another chapter or another piece of the book. While I read what he wrote, I would do a couple of things: First I would edit it and write down questions that any reader would want to know. Like if he was talking about a young lady, I would ask him what was her name, where was she from, what did she look like, how did y’all meet? If it was about an event or someone famous, I would go online or look for other sources to verify or elaborate on it.

Once I finished a chapter, I would give it to him, he would go over it, add to it, make any changes or say, “Run it.” The whole time, Herm would use his memory and I would use my talent as a writer to make his life into a story we could all read. We did that for a good eight months until the book was finished.

MOI JR: How did you make the jump from Bay View newspaper writer to book writer?

Ebony: I started writing for the Bay View in 2002, at 21 years old and, even before then, I was working on my first novel. As I got more stories and more editorials, people would suggest that I do a book. I just didn’t have the time with working and the kids. I would do my book a little bit here and there.

When I stopped writing for the Bay View, people started approaching me about writing for their publications. I’ve done Hoodstar, Bay Area Makeup Artists (mag), which will launch in the summer, and a number of other Bay Area publications. In 2007, Herm and my husband, Shawn, ended up working together. It was a huge coincidence because the same year, I started working for Herm’s digital distribution company.

To make a long story short, he told my husband he was working on a book and my husband called me immediately. I put my book on hold because it was fiction and I felt Herm’s story needed to be told. It was on time. Now I’m finishing my book series, which will be ready by 2010.

MOI JR: What did you have to do to put out a book independently?

Ebony: During the time I started working with Herm, I started my own artist management company called Basic Black Business. I already had two rap clients who I was doing marketing for, so when I started working with Herm, I knew first thing first is marketing. We had already cut the fliers for promotion; I set Herm up a myspace page and started doing marketing online. Then I let his reps at his distribution company know what was happening.

Lastly, I contacted my friends, family and media folks to get it out there. I researched different publishers and printers and decided it would be in our best interest to try to do the distribution on our own to save money. So while we were writing the book, we hooked up with a printer who would bind and print the book and we could do our own distribution. It was that decision that caused Herm to hire me as his publicist/manager.

MOI JR: What else are you working on literary-wise?

Ebony: I have a book series called “3 Street” that I’m finishing. The first book in the series is called “Get Back.” It’s about a young married couple who move out the ghetto but the drama they grew up in follows them to Atlanta. It’s a thriller.

It’s not one of those romance novels, or unreal “urban fiction books.” There will be violence, sex and drugs … but it is well done, not glamorized or overdone. It’s real. They’ve moved out the hood, own their own businesses and look like they’re living fly! But they are keeping secrets from each other that tear up their marriage and the pretty little playhouse they built. And at least five characters are modeled after people I know … and people you might know too!

I’m doing the autobiography for Victor “CreatureMan” Jones from the Scalen Family – he was on most of Messy Marv’s songs – and “Paradise Ventures” for a community writer named Marvin Crutchfield. Plus, I got the documentary and compilation cd for Herm’s book coming out this summer so I’ma be real busy for at least a year.

MOI JR: How could people keep up with you?

Ebony: I’m flexible. You can visit me at myspace.com/blackbusinessgrp, call me at (415) 519-5470 or email me at basicblackbiz@yahoo.com. I’m also looking for models, comedians, rappers who want management, marketing and booking help.

To pick up Herm’s book, you can go to Marcus Books either in Oakland, at 3900 MLK Jr. Way, or San Francisco, at 1712 Fillmore St., or online at www.marcusbookstores.com. You can also get it at Herm’s myspace, myspace.com/BlackPowerProductionsMusic. Or just contact me; I deliver!

The price he paid

Waiting for the shots to stop