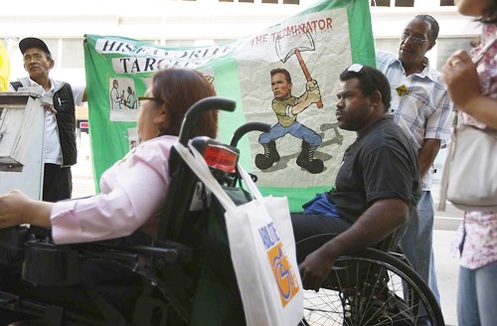 Among other things, the Democrats supported a $1.3 billion cut to MediCal, a $2.8 billion cut to the statewide university system, and a $6 billion cut to California’s K-12 schools. The Democratic leadership also supported the Republicans’ push to slash the children’s health insurance program known as Healthy Families, as well as In-Home Supportive Services and the CalWORKs program by cutting $878 million or more in coming months.

Rather than raising taxes on the rich and the major corporations that fail to pay their fair share of the tax burden in California, the Democrats chose to side with the Republicans and two bit actor Schwarzenegger turned governor in stealing precious resources meant to assist students, children, the sick, disabled, elderly, poor and working middle class.

Meanwhile, Congresswoman Barbara Lee and other phony liberals continue to remain silent about the budget cutting process taking place in Sacramento, while the true extent of the attacks on the poor, elderly and disabled plumbs new depths of deception and depravity.

During recent weeks, numerous calls made to Congresswoman Lee’s office inquiring as to why the powerful congresswoman remains silent about the attack on California’s safety net have resulted in nothing more than a big “No comment” coming from her staffers in Washington, including her Oakland spokesperson Ricci Graham. “California’s budget crisis is a state issue, not a federal issue, and therefore Congresswoman Lee has no comment,” said Graham – his statement totally lacking in credibility and humanity.

As California’s Democratic leadership, including Assembly Speaker Karen Bass and Pro Tem Darrel Steinberg for a total of 18 Democrat sell-outs who supported the Republican’s attack on the safety net, try to conceal how much damage they have wrought upon the general public, hundreds of thousands of Californians will be hit hard in future months by the budget deal that protects the interests of the mighty rich, as it crushes the lives and interests of the working class poor.

Making matters worse for the elderly, disabled and poor, the Democratic leadership granted extreme new powers to the Republican minority by agreeing to proposals that do major damage to COLAs (cost of living increases) for those in CalWORKs, SSP (State Supplementary Payment that augments federal Supplemental Security Income, or SSI) and other areas of the state’s safety net by requiring that any new COLAs for the people in those programs be approved by a two-thirds vote in future budget proposals.

At a small July 22 rally in front of Oakland City Hall, Eleanor Walden and her daughter, Nasira, publicly spoke out against the Republican budget cutting proposals along with Zachary Norris of Books Not Bars and Kevin D. Shields, coordinator for the Disabled Students Program at the University of California, Berkeley.

“The thought of the Democrats siding with the Republicans in the fascist proposals being passed to make the elderly and disabled get fingerprinted because of their participation in the In-Home Supportive Services Program, is enough to make my blood boil,” said Walden, a Berkeley scholar of 20th century American history and folklore.

“This is absolutely parallel to the fascism of Europe during the 1930s in its broad attack on the elderly, disabled and poor, who are being scapegoated just as the Jews of Europe were in the ‘30s. They are turning citizens into aliens and are trying to turn the elderly and disabled into criminals.

“I can bear witness to the damage being done to people in my generation by the horrific effects of the budget cuts taking place,” said Walden, “and I further believe that we have become living targets of a fascist state. As witness to recent events, I am convinced that we are on the road to fascism.”

Kevin Shields, representing disabled students, said, “By cutting the social services desperately needed by the disabled and elderly, you create a whole new class of citizens who become angry, frustrated and disillusioned about the system that was meant to assist them in their time of need.”

Lydia Gans of Food Not Bombs said, “We already are seeing a huge increase in the homeless and hungry due to the effects of a bad economy during our feeding times at People’s Park. The nonprofits who usually help out are losing funding and donations, and this latest round of budget cutting proposals will increase the level of homelessness and hunger all across the state.

“What should be happening is that everyone affected by the budget cuts should be in the streets of Sacramento and cities across the state to protest against the inhumanity and catastrophic effects that are taking place in everyday people’s lives.”

As being proposed by state lawmakers, there’s an additional $8 million in funding to be slashed from the budget for state parks, on top of the $226 million in cuts to IHSS, plus $528 million from CalWORKS, including $124 million in cuts from the Healthy Families program that will negatively affect 930,000 low-income children.

SSI/SSP recipients have already taken a huge 6.4 percent cut from the state assistance program since February 2009, including the suspension of their cost of living increases that were promised to be paid back after being grabbed by the governor. It will be nearly impossible to restore the cost of living increases now that the Democrats gave new sweeping powers to the Republicans, especially the requirement for a two-thirds majority vote prior to any future cost of living adjustments.

As the Democrats try to conceal and deceive the public about the true extent of damage they have done to California’s safety net by siding with the Republicans in the vicious attack on children, the disabled, elderly and working class poor, additional budget cuts are expected as the governor prepares to use the line item veto during the next few days to slash another $1.1 billion as he balances the budget on the backs of the poor.

A press conference and rally for the “People’s Budget Fix,” calling for criminal justice reforms that will increase public safety, protect the social safety net and save the state billions, will take place on Thursday, July 30, between 11 a.m. and 12 noon at the Elihu M. Harris State Building, 1515 Clay St., Oakland, near the 12th Street BART Station. Contact Jennifer Kim at Jennifer@ellabakercenter.org or (510) 285-8234 for more information on the rally.