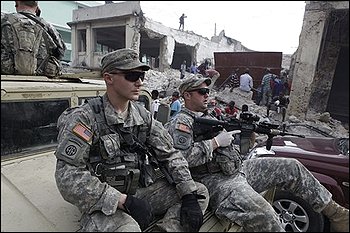 The U.S. government dispatched more than 12,000 troops and $379 million in “aid to Haiti” after the earthquake. As many as 250,000 people have died. The train of misery is growing daily.

The phrase “aid to Haiti” might not be entirely accurate.

For every dollar spent in the “aid” effort, 33 cents pay for the U.S. military force that has taken control of the country. In contrast, the U.S. government is spending only 9 cents of every dollar on food and another 9 cents to transport the food. The military expenditures in Haiti are on top of the annual U.S. military budget.

The statistical breakdown of how U.S. earthquake aid is being spent was undertaken by a review conducted by the Associated Press and reported by AP on Jan. 27. AP also reports that Haitians are being hired at meager wages to assist the U.S. efforts.

“The Obama administration is putting 5 cents of each dollar into efforts to pay survivors to work. One program already in place describes paying 40,000 Haitians $3 per day for 20 days to clean up around hospitals and dig latrines,” according to the AP report.

The U.S. military immediately took control of the airport and ports in Haiti following the earthquake. The U.S. priority was to land contingents of what will be a 12,000-plus military force. This prevented humanitarian aid from reaching Haiti.

After not being able to land for days, the World Food Program was finally allowed access to the airfield, according to another report in the New York Times. The group had been denied access to the airstrip for days so that U.S. troops and military equipment could land.

The $379 million that the U.S. is spending on Haiti is less than the cost of one day spent on the Iraq and Afghanistan occupation. That number is approximately $480 million each day.

This story first appeared on PSLweb.org, the website of the Party for Socialism and Liberation.

Why we need Digital Mobility