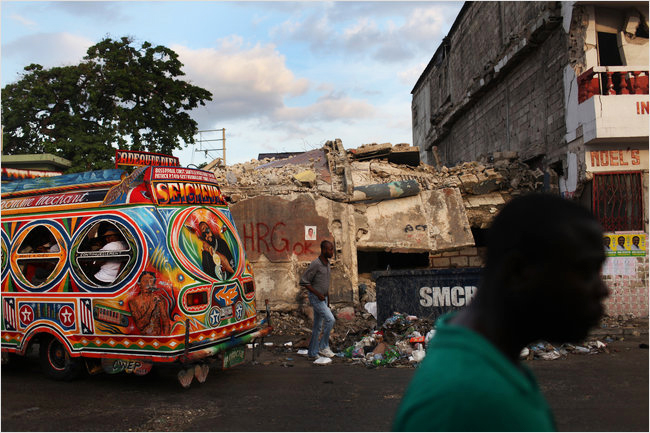 One year after an earthquake devastated Haiti, much of the promised relief and reconstruction aid has not reached those most in need. In fact, the nation’s tragedy has served as an opportunity to further enrich corporate interests.

The details of a recent lawsuit, as reported by Business Week, highlights the ways in which contractors – including some of the same players who profited from Hurricane Katrina-related reconstruction – have continued to use their political connections to gain profits from others’ suffering, receiving contacts worth tens of millions of dollars while the Haitian people receive pennies at best. It also demonstrates ways in which charity and development efforts have mirrored and contributed to corporate abuses.

Lewis Lucke, a 27-year veteran of the U.S. Agency for International Development (USAID) was named U.S. special coordinator for relief and reconstruction after the earthquake. He worked this job for a few months, then immediately moved to the private sector, where he could sell his contacts and connections to the highest bidder. He quickly got a $30,000-a-month (plus bonuses) contract with the Haiti Recovery Group (HRG).

HRG had been founded by AshBritt, Inc., a Florida-based contractor that had received acres of bad press for its post-Katrina contracting. AshBritt’s partner in HRG is Gilbert Bigio, a wealthy Haitian businessman with close ties to the Israeli military. Bigio made a fortune during the corrupt Duvalier regime and was a supporter of the right wing coup against Haitian president Aristide.

Although Lucke received $60,000 for two months work, he is suing because he says he is owed an additional $500,000 for the more than $20 million in contracts he helped HRG obtain during that time.

As Corpwatch has reported, AshBritt “has enjoyed meteoric growth since it won its first big debris removal subcontract from none other than Halliburton, to help clean up after Hurricane Andrew in 1992.” In 1999, the company also faced allegations of double billing for $765,000 from the Broward County, Florida, school board for clean-up done in the aftermath of Hurricane Wilma.

AshBritt CEO Randal Perkins is a major donor to Republican causes and hired Mississippi Gov. Haley Barbour’s firm, as well as former U.S. Army Corp of Engineers official Mike Parker, as lobbyists. As a reward for his political connections, AshBritt won $900 million in post-Katrina contracts, helping it to become the poster child for political corruption in the world of disaster profiteering, even triggering a congressional investigation focusing on their buying of influence. MSNBC reported in early 2006 that criticism of AshBritt “can be heard in virtually every coastal community between Alabama and Texas.”

The contracts given to Bush cronies like AshBritt resulted in local and minority-owned companies losing out on reconstruction work. As Multinational Monitor noted shortly after Katrina, “by turning the contracting process over to prime contractors like AshBritt, the Corps and FEMA have effectively privatized the enforcement of Federal Acquisition Regulations and disaster relief laws such as the Stafford Act, which require contracting officials to prioritize local businesses and give 5 percent of contracts to minority-owned businesses. As a result … early reports suggest that over 90 percent of the $2 billion in initial contracts was awarded to companies based outside of the three primary affected states, and that minority businesses received just 1.5 percent of the first $1.6 billion.”

Alex Dupuy, writing in The Washington Post, reported a similar pattern in Haiti, noting that “of the more than 1,500 U.S. contracts doled out worth $267 million, only 20, worth $4.3 million, have gone to Haitian firms. The rest has gone to U.S. firms, which almost exclusively use U.S. suppliers. Although these foreign contractors employ Haitians, mostly on a cash-for-work basis, the bulk of the money and profits are reinvested in the United States.” 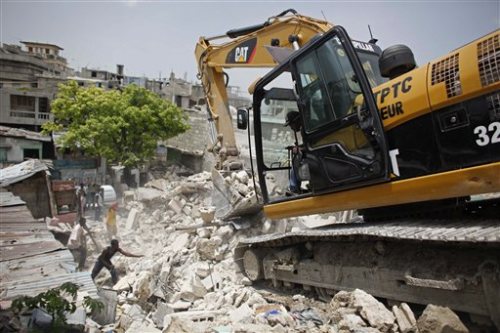 The same article notes that “less than 10 percent of the $9 billion pledged by foreign donors has been delivered, and not all of that money has been spent. Other than rebuilding the international airport and clearing the principal urban arteries of rubble, no major infrastructure rebuilding – roads, ports, housing, communications – has begun.”

The disaster profiteering exemplified by AshBritt is not just the result of quick decision-making in the midst of a crisis. These contracts are awarded as part of a corporate agenda that sees disaster as an opportunity, and as a tool for furthering policies that would not be possible in other times. Naomi Klein exposed evidence that within 24 hours of the earthquake, the influential right-wing think tank the Heritage Foundation was already laying plans to use the disaster as an attempt at further privatization of the country’s economy.

Relief and recovery efforts, led by the U.S. military, have also brought a further militarization of relief and criminalization of survivors. Haiti and Katrina also served as staging grounds for increased involvement of mercenaries in reconstruction efforts. As one Blackwater mercenary told Jeremy Scahill when he visited New Orleans in the days after Katrina, “This is a trend. You’re going to see a lot more guys like us in these situations.”

And it’s not just corporations that have been guilty of profiting from Haitian suffering. A recent report from the Disaster Accountability Project (DAP) describes a “significant lack of transparency in the disaster-relief/aid community,” and finds that many relief organizations have left donations for Haiti in their bank accounts, earning interest rather than helping the people of Haiti. DAP director Ben Smilowitz notes that “the fact that nearly half of the donated dollars still sit in the bank accounts of relief and aid groups does not match the urgency of their own fundraising and marketing efforts and donors’ intentions, nor does it covey the urgency of the situation on the ground.”

Haitian poet and human rights lawyer Ezili Dantò has written, “Haiti’s poverty began with a U.S./Euro trade embargo after its independence, continued with the Independence Debt to France and ecclesiastical and financial colonialism. Moreover, in more recent times, the uses of U.S. foreign aid, as administered through USAID in Haiti, basically serves to fuel conflicts and covertly promote U.S. corporate interests to the detriment of democracy and Haitian health, liberty, sovereignty, social justice and political freedoms. USAID projects have been at the frontlines of orchestrating undemocratic behavior, bringing underdevelopment, coup d’etat, impunity of the Haitian oligarchy, indefinite incarceration of dissenters and destroying Haiti’s food sovereignty, essentially promoting famine.”

Since before the earthquake, Haiti has been a victim of many of those who have claimed they are there to help. Until we address this fundamental issue of corporate profiteering masquerading as aid and development, the nation will remain mired in poverty. And future disasters, wherever they occur, will lead to similar injustices.

Jordan Flaherty is a journalist and staffer with the Louisiana Justice Institute. He was the first writer to bring the story of the Jena Six to a national audience, and his award-winning reporting from the Gulf Coast has been featured in a range of outlets including the New York Times, Mother Jones, and Argentina’s Clarin newspaper. He has produced news segments for Al-Jazeera, TeleSur, and Democracy Now, and appeared as a guest on CNN Morning, Anderson Cooper 360, and Keep Hope Alive with the Reverend Jesse Jackson. His new book is “FLOODLINES: Community and Resistance from Katrina to the Jena Six.” He can be reached at neworleans@leftturn.org and more information about “Floodlines” can be found at floodlines.org. For speaking engagements, see communityandresistance.wordpress.com.