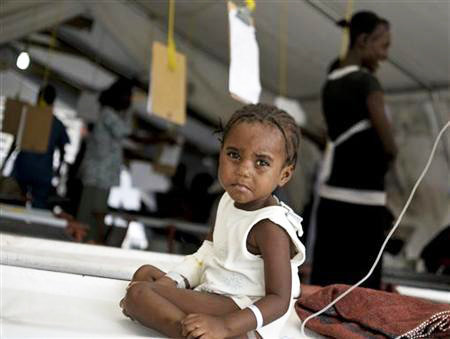 Haiti’s Ministry of Health finally gave in and officially announced the beginning of a vaccination campaign against cholera, after one year of pressure from the United Nations’ Pan American Health Organization (PAHO) and the recent takeover of Haiti’s prime-ministerial position by Clinton aide and U.N. employee Garry Conille.

Cholera is eminently curable, and the cure is clean water.

If Haitians are still getting cholera at the rate of over 10,000 a month, this is because they are continuing to drink surface water from sources previously considered safe but that have become contaminated. So why are the Pan American Health Organization (PAHO), Medecins Sans Frontieres (MSF), Paul Farmer and Partners in Health (PIH) so eager to administer vaccines to Haitians and so slow to promote waste treatment and water purification?

By contrast to MSF and PIH, 900 Cuban health experts, working out of their mobile medical units in 40 Haitian communities, are promoting disease prevention. So far, Cuban medical aid to Haiti has been vastly more successful than aid from NGOs.

Since the cholera vaccination campaign is quite futile, it is not surprising to find that this campaign is not a part of Cuba’s medical aid.

Unlike the diseases against which people are traditionally vaccinated, cholera is not communicable. In other words, with a minimum of good hygiene, cholera cannot be caught from casual contact with someone. According to Dr. Renaud Piarroux:

“[Cholera] can be provoked by close contact with somebody suffering from cholera, but it’s easy to protect oneself from this kind of transmission by good hygiene. This is why medical staff rarely get ill despite the fact that they have numerous contacts with people suffering from cholera.”

Tourists also don’t get cholera. Vaccines are not recommended to those entering areas where cholera is endemic because clean water and good hygiene are best, and cholera vaccines are demonstrably unreliable.

Vaccines are not recommended to those entering areas where cholera is endemic because clean water and good hygiene are best, and cholera vaccines are demonstrably unreliable.

• Protect only a fraction of the people who are vaccinated – usually about 60 percent.

• Typically confer protection only for a few months, since the cholera bacteria rapidly change their DNA.

• Do not protect at all against strains of cholera other than those targeted by the vaccination.

Nevertheless PAHO began to promote a cholera vaccine for Haiti almost from the day the cholera epidemic hit the country in fall 2010. PAHO was supported in this by Harvard scientists with financial interests in the sale of cholera vaccines.

The same scientists also helped the U.N. to cover up the source of Haiti’s cholera for many months. Paul Farmer still enjoys considerable trust from Haitians because he founded PIH, but, like Garry Conille, he is now a U.N. employee and Clinton aide. He also hails from Harvard. He needs to explain why he is promoting these useless vaccines so much more enthusiastically than waste and water treatment.

The aim of the much-touted new vaccination campaign is to inoculate 100,000 Haitians — mostly children — with 200,000 doses of a vaccine called Shanchol, at $1.85 per dose. Development of Shanchol was financed by the Gates Foundation, and its manufacture is by an Indian company called Shantha Biotechnics.

Less than a month ago, Shantha Biotechnics still lacked the WHO approval required for U.N. agencies to buy the vaccine, because the WHO had continued to argue that cholera vaccines are unnecessary. Miraculously, Shanchol was quickly “pre-qualified” by the WHO on Sept. 29.

Less than a month ago, the World Health Organization (WHO) continued to argue that cholera vaccines are unnecessary.

Despite the claims that the vaccine will alleviate the cholera in Haiti, hardly anything is known about the effects of vaccines on endemic cholera. So this vaccination campaign is actually an experiment designed to test just this, and Haitian children will be the guinea pigs.

Unsurprisingly, the campaign will start with some of Haiti’s poorest children: those from Cite Soleil.

Hardly anything is known about the effects of vaccines on endemic cholera. So this vaccination campaign is actually an experiment designed to test just this, and Haitian children will be the guinea pigs.

Parents who agree to submit their children to this campaign will be taking a big chance. Many problems, including deaths, often result from vaccination campaigns, because vaccines are notorious for shortcomings such as contaminations of lots.

And if you think the campaign will ever end, think again. Cholera bacteria change. PAHO is already predicting 250,000 new cases of cholera in Haiti next year. Once the vaccinations begin, they will become a yearly event: another carnival.

Dady Chery grew up at the heart of an extended working-class family in Port-au-Prince, Haiti. She emigrated to New York when she was 14 and since then has traveled throughout the world, living in Europe and several North American cities. She writes in English, French and her native Créole and holds a doctorate. She can be reached at dc@dadychery.org. This story first appeared at Haiti Chery.

On Oct. 17 and 19, separate demonstrations in areas of Leogane and Port-au-Prince were held by Haitian groups against the U.N. peacekeeping mission in Haiti known as MINUSTAH, blamed for inadvertently starting a cholera outbreak that has killed over 6,500 people in the past year. Of course, because neither protest resulted in any tear gas or violence, they were almost entirely ignored by the international press. – Video: Yvon Vilius and Ansel Herz, Media Hacker