Dedon Kamathi, a former Black Panther and Central Committee member of the All African Peoples Revolutionary Party (AAPRP), passed away at the end of August after suffering a stroke.

I first spoke with Dedon, a.k.a. Ken Carr, way back in the 1980s when I was arranging to bring Kwame Ture (Stokely Carmichael) to speak in my then hometown of Honolulu, Hawaii. Dedon was one of the first revolutionary Black internationalists I was to get to know and work with, and his loss hit me hard.

Dedon began his life as a revolutionary activist while still a teenager as a member of the Black Panther Party and he survived the FBI’s Cointelpro death squad program that saw the assassination of over 200 Panthers and American Indian activists in the 1960s and early ‘70s. Dedon went on to join the AAPRP and rose to membership on its Central Committee representing the Southern California region.

Coming from Hawaii and having spent my youth bodysurfing everywhere from Point Panic to the world famous North Shore breaks, I quickly learned that Dedon was a revolutionary Black surfer – that’s right, there are Black surfers, and Dedon at one time was president of the Black Surfers Association in Southern California.

After Kwame Ture’s visit in 1985, I kept in touch with Dedon, who sent me a study packet of the AAPRP’s material used to raise the political consciousness of its new cadre, something the Party was very diligent about, knowing full well that issues come and go and the glue that holds revolutionary organizations together is a high level of political consciousness.

This was my first exposure to revolutionary Black nationalism – Pan Africanist internationalism really – and, along with the AAPRP’s introducing me to the Eritrean people’s national liberation struggle, started me on a path that I am still on today. In 1987, Dedon, along with Kwame Ture, helped secure me an invitation to be a member of the first U.S. Peace Delegation to Libya, though both brothers remained in the USA to organize a simultaneous demonstration in Washington, D.C., that included a satellite link live from Tripoli, Libya.

Dedon began his life as a revolutionary activist while still a teenager as a member of the Black Panther Party. Dedon went on to join the AAPRP and rose to membership on its Central Committee representing the Southern California region.

You have to remember that before Osama Bin Laden, there was Saddam Hussein – and before Saddam Hussein, there was Muammar Gaddafi of Libya, who in 1987 was public enemy number one in the United Snakes of AmeriKKKa. So holding a demonstration of several thousand people supporting revolutionary Libya in the heart of Babylon, Washington, D.C., Chocolate City, as it was known, was an act of defiance few dared to envision back then. Just going to Libya was declared a crime by President Reagan in 1987, and all of us in the delegation were threatened with serious jail time for our visit.

After the Libya trip, I continued to call Dedon in LA regularly to discuss politics – there really wasn’t anyone in Hawaii that I could talk to about Pan Africanism and revolutionary politics in general – and Dedon did a lot to raise my understanding of what was really going on in the world.

In 1996, Gary Webb broke the “Dark Alliance” story on how the CIA and the Nicaraguan Contras started what became the crack cocaine pandemic in South Central Los Angeles and I immediately contacted Dedon and he helped me start our local chapter of the Crack the CIA Coalition. Following my bringing Gary Webb to Hawaii to speak as a part of the coalition’s activities, Dedon helped me arrange Dick Gregory’s visit, since Dick was very active in exposing the crimes of the CIA at the time.

Dedon, along with Kwame Ture, helped secure me an invitation to be a member of the first U.S. Peace Delegation to Libya, though both brothers remained in the USA to organize a simultaneous demonstration in Washington, D.C., that included a satellite link live from Tripoli, Libya.

I didn’t actually meet Dedon in person until 1999, having only spoken to him over the telephone for all those years. When Kwame Ture passed away, I brought Dedon to Hawaii to give the eulogy for Kwame at his Memorial Service at the Center for Hawaiian Studies, where Lilikala Kamehe’leihiwa had helped organize Kwame’s standing-room-only presentation in 1994.

After the memorial program, Dedon stayed with me for another week and I had a chance to get into some very deep discussions with the brother. I took him to the Hawaii’s world famous North Shore (my homestead was at the beginning of the North Shore road up the windward Oahu coast) and showed him the surfing breaks that were safe, where the best deals on renting a surfboard were and the best lunchwagons for healthy sustenance between catching waves.

I lent Dedon my country cruiser station wagon, something wicked for his higher consciousness, and set him loose to enjoy the waves. The night before he left I took him and my daughter to see Will Smith in “Enemy of the State,” and the discussion we had after kept us up late into the night.

That was the last time I was to see Dedon in person, though we kept in touch over the years. After I moved to Eritrea in 2006, Dedon had me on his radio program in Los Angeles to talk about Eritrea, and the last time we spoke was after his trip to Syria, where he had a chance to see Afshin Rattansi’s groundbreaking documentary on Eritrea on PressTV. He promised to follow up, but being Dedon he always had a lot of irons in the fire and we didn’t get another chance to reconnect.

Dedon is gone but his spirit, embodied in the revolutionary consciousness of Pan Africanism and revolutionary internationalism, lives on, at least here in Eritrea and increasingly in the Eritrean youth in the diaspora, something I know Dedon was more than pleased to see developing.

Dedon is gone but his spirit, embodied in the revolutionary consciousness of Pan Africanism and revolutionary internationalism, lives on.

Dedon always greeted you with “Ready for Revolution,” and I add to that “Awet N’Hafash,” Victory to the Masses, as we say here in Eritrea. 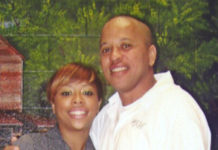 The trials of Rep. Maxine Waters: Ethics or payback?