Real dirty dirt: As if the Hunters Point Naval Ship-yard, a federal Superfund site, wasn’t dirty enough, the prime cleanup con-tractor, IT Corp., gave permission to S&S Trucking Co. to stockpile this moun-tain of dirt that S&S hauled from the Millbrae BART project. The dirt, piled next to the former headquarters building of the Naval Radio-logical Defense Laboratory, shown at the far right of the picture, is now said to be contaminated by radiation. Local Black truckers, denied work by the Navy, BART and Muni, are outraged. They ask where and at whose expense the dirt will be disposed of.

In November, on the same day an additional $50 million was appropriated for the clean-up of the Hunters Point Naval Shipyard, Alfred Cain, a neighborhood-based Black construction truck broker, was selected by bid to do the off-hauling of waste as part of the cleanup project. Since then, Cain has been hanging on to his contract by a “thread.”

At the time of the bid, Cain was the only listed trucker. But once the off-hauling began, he found himself joined by two white-owned trucking operations, S&S Trucking and Denbeste Trucking. Both companies are based outside San Francisco.

IT Corp., the general contractor heading up cleanup efforts at the Shipyard, began ignoring Al Cain Trucking — despite the fact that the trucking contract had been awarded solely to his company — and ordering trucks from the two white-owned companies instead. In essence, IT Corp. appears to have intended from the outset to use Al Cain Trucking as a “front” to satisfy community concerns about using local businesses to perform the work. Large prime contractors refusing to use Black businesses as anything but fronts has become “business as usual” in San Francisco.

Last week, IT Corp. — the same company that is conducting the anthrax cleanup of the Senate office building in Washington, D.C. — filed for Chapter 11 bankruptcy protection. That’s an incredible fall for a company that has been making billions of dollars over decades in business as a leading provider of environmental and engineering facilities management, construction, emergency response and remediation services, both in the public and private sector.

On Jan. 23, it was reported on KRON-TV Channel 4’s 5 p.m. news broadcast that Superfund cleanup monies continue to flow to the IT Corp. But what was not reported is that these funds are continuing to flow into the hands of a bankrupt corporation!

Just imagine a local Black-owned business being awarded a major government contract. Now imagine this company not only attempting to use a small business as a “front” to meet anti-discrimination guidelines, but suddenly filing for bankruptcy. Would the government turn a blind eye to both the discriminatory practices and financial difficulties of the company — and continue to pour millions of dollars of taxpayer money into the project? Of course not!

How Hunters Point has been raped

Back in the early ’90s, Sens. Feinstein and Boxer and Congresswoman Pelosi aided and abetted the sale of our community by changing the legislative definition of the area from “Enterprise Zone” to “enterprise city” — in essence, re-routing the funding from our community directly into City Hall.

Furthermore, those few of us who were in attendance will remember the weekly meetings held around the City back in the early 1990s by the Environmental Protection Agency (EPA) to alert residents living in or near Hunters Point, Treasure Island and the Presidio that these areas had been newly designated as Superfund sites by the government. San Francisco presents a unusual scenario, being a triple Superfund location — a most important fact that most local residents are still not aware of.

At the outset of the meetings addressing the new Superfund site designations, the federal government, by way of EPA representatives, put the community on notice that the funding was directly specified for people in the immediate vicinity of the Hunters Point Shipyard. The residents of Bayview Hunters Point and local employers were to reap the golden benefits of these federal funds, to replace the jobs and business opportunities lost when the Shipyard closed.

Instead, those benefits have been usurped by others.

As Blacks struggle to survive in San Francisco, the most expensive city in the nation, many have stepped out with their own talents to utilize the blessing of self-employment.  Many have gone into business in the construction trades that they had mastered as workers.

Yet while the Navy has spent hundreds of millions of dollars on cleaning up the Shipyard, Blacks have been excluded — denied the trucking and other contracts needed to put bread on their tables. Families who have lived in Hunters Point for five generations, whose parents and grandparents built the Shipyard, are unable to make a living.

Last Wednesday, a week after a thousand residents came out to demand jobs and contracts on the Third Street light rail project that is about to be built, Muni opened bids for the first portion of the street work — Contract No. MR-1141, covering work to be performed at King Street and Third.

The low bidder, a joint venture of Shimmick Construction and Homer J. Olsen Co., listed several companies it intends to use for the trucking. Black truckers are furious, because not a single company listed is a legitimate Black business.

It is well known that three of the names on the list, S&S Trucking, Charlie Walker and Rogers Trucking, are not certified as disadvantaged businesses. Rogers is a third-generation, white-owned operation. Legitimate Black truckers who are denied the right to contract independently and thus are forced to work for Rogers consider the relationship little better than master and slave.

They name Rogers the mastermind behind most of the “fronting” that puts them out of business or out of work. And they point to the fact that Rogers is an owner of a bank — while Black truckers are redlined by the banking industry.

Cobra Trucking, another name on the list, is controlled by Esquivel Grading and Paving Co. The owner of Esquivel is the father of the purported owner of Cobra, making Cobra another front.

Neither is Mongoose Trucking, listed for at least $150,000 in trucking on this contract, an independent business. Its “owner” is actually a driver for Mitchell Engineering and has never owned any type of construction equipment. Other truckers say this man did not own a shovel three weeks ago — let alone a Peterbuilt truck.

A call to Muni confirmed that the contract compliance officer is aware that the listed companies are not qualified to meet the federal disadvantaged business goal. But they say the contract will nevertheless be awarded to the low bidder unless strong complaints are heard.

Protest letters were submitted yesterday by Black truckers who bid the work but were not listed. The public is also invited to call Muni at (415) 923-6138.

A demand by Blacks for our fair share of contracts and employment opportunities is long overdue. Recent studies by the Human Rights Commission show the results of relentless racial discrimination — vast disparities and exclusion. Fronting flourishes while the HRC fails to protect the interests of real minority- and women-owned businesses.

Black truckers and contractors can’t hire from the community when they themselves have no work or no control over their work. This is a major reason why the Bayview community suffers from astronomically high unemployment rates. This is also a major factor contributing to the extremely high rate of homelessness among Blacks in San Francisco.

This type of contract fraud brings workers in from outside the City, hired by unqualified, uncertified or illegally certified businesses. Both the HRC and the Regional Transit Association, which is responsible for certification at Muni, are notorious for undermining bona fide minority- and women-owned businesses.

These continuing policies create and intensify the problems that are driving Blacks out of San Francisco. They are essential to understanding the exodus that has cost the Black community nearly a quarter of its population in the past decade.

In case Muni didn’t get the message delivered in person by 1,000 Bayview Hunters Point residents two weeks ago, read our lips. Exclusion ain’t gonna happen on the Third Street light rail project! We will shut the mother-humper down!

Tell the Supervisors how you feel about “dirty transfer” — transfer prior to cleanup — of the Hunters Point Shipyard: 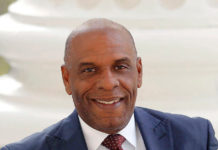 California After COVID – Recovery is Not Good Enough