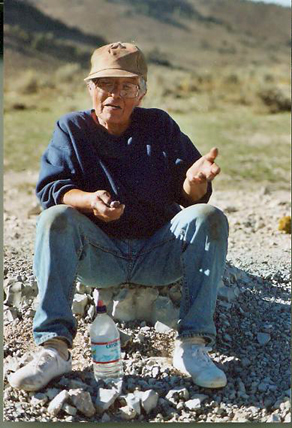 “There is nothing divine about something built to destroy life,” said lifelong war resister and Western Shoshone elder Carrie Dann, as she was arrested, yet again, protesting “Divine Strake,” the 700-ton, thoroughly unconventional, conventional weapon designed to compensate for all the radioactive carcinogens in the nuclear bunker buster that Congress refused to let George Bush have last year.

Divine Strake, which the military said would have 280 times the force of the explosives that hit the Oklahoma City Federal Building, was scheduled to hit the Nevada nuclear test site on June 2, creating a giant mushroom cloud over Las Vegas and further downwind, which most rational people would expect to be full of radioactive particles from what may be the hottest hot spots on earth.

Nevada officials and protesters from all over succeeded in having it postponed indefinitely, but Carrie Dann wants it cancelled altogether. Carrie has been fighting war, violations of Western Shoshone treaty rights and nuclear explosions on the Nevada Test Site, which sits on land promised, in the Treaty of Ruby Ridge, to the Western Shoshone, who are now the most bombed nation on earth.

Carrie and her sister, Mary Dann, worked their ranch and battled the federal government side by side until Mary died mending fence on their ranch last year. A newspaper headline read, “For Mary, the Battle Is Over.”

Carrie, a grandmother, as Mary was, continues nevertheless. When I spoke to her last week, she said, “I just don’t understand these people. I was always taught that it’s our responsibility to preserve the earth for the next generation.”

I hadn’t realized that I was speaking to the world-renowned peace and human rights acitivist Carrie Dann when I called the office of the Western Shoshone Defense Project till I asked who I might be speaking to. 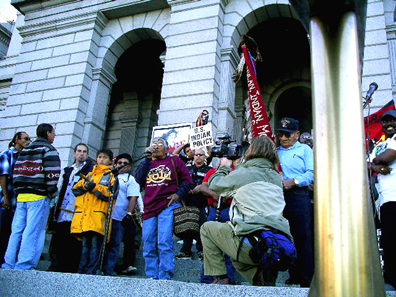 “I’m Carrie,” she said. “Oh my,” I said. “You mean I’m actually talking to the famous Carrie Dann?” “Infamous,” she giggled.

Carrie Dann, Louise Benally of the Diné (Navajo) Nation on Big Mountain and Rosalee Little Thunder-Sicangu of the Lakota Nation will be here to share news of their battles in Indian Country next Monday and Tuesday.

Louise Benally’s presentation should be especially meaningful to San Franciscans because she and other Navajo and Hopi residents face forced evacuation to make way for big energy corporations which will sell power to PG&E and pipe it all the way here so that PG&E can sell it to us. If this happens, the Hopi and Navajo on Big Mountain will lose their traditional lands for the sake of our electricity and PG&E’s profits.

Peabody Coal and Sithe Global Energy, intend to mine coal and build a coal-fired power plant, the sixth on the Navajo Reservation, which will not only further pollute the air with particulates causing asthma and cancer but also contaminate the water in the N and C aquifers that the Navajo and Hopi there have always depended on. For their beneficence – bringing contaminating, carcinogenic, totally insecure, casual employment to the Navajo – Sithe Global Energy has requested half a billion dollars in tax credits, to assure that it “remains competitive.”

Carrie Dann, Louise Benally and Rosalee Little Thunder-Sicangu will appear on Monday, June 19, at the Humanist Hall in Oakland, 390 27th St. and 411 28th St., between Telegraph and Broadway, and on Tuesday, June 20, at New College of California in San Francisco, 777 Valencia. Both events are from 7 to 10 p.m. Don’t miss them if you can help it.

Ann Garrison can be reached at anniegarrison@thepriceofuranium.com.