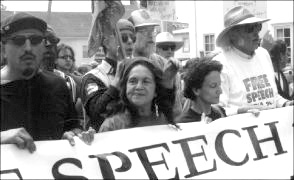 by Miguel Gavilan Molina, producer and host of La Onda Bajita and roving producer for Flashpoints

I have worked with and for the rights of the indigenous and Latino communities for decades. As a child I broke my back as a laborer and a picker in the scorching fields of misery. My whole family were farmworkers and my father was beaten and brutalized by the police and INS, AND I SAW MY MOTHER KNOCKED UNCONCIOUS TRYING TO DEFEND MY FATHER.

I am referring to a recent decision by our patrones at KPFA and Pacifica to call the police and allow eight well-armed cops to beat, cuff, hogtie and drag out of a KPFA a most trusted colleague, KPFA apprenticeship graduate Nadra Foster. Foster, who has been at KPFA for about 12 years, was referred to in a recent and widely-distributed management e-mail – signed by the interim general manager – as an “unauthorized visitor” and arrested at the request of KPFA management for “trespassing” on private property.

She was badly roughed up by police and emotionally wounded, even as Pacifica Executive Director Nicole Sawaya apparently tried to prevent Hard Knock Radio producer Weyland Southon from visually documenting the eight-cop assault against Nadra.

The closest eye-witness, Anita Johnson from Hard Knock Radio, has given a very compelling and troubling written eyewitness account that is now widely available. Since the incident, Anita says she feels totally unsafe in KPFA under the current management. I assure you, brothers and sisters, Anita is not alone in feeling vulnerable and terrorized. 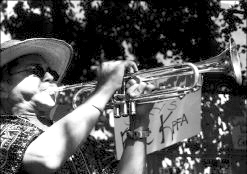 And what a shocking turn of events for me. Imagine, almost 20 years ago, I and my brothers and sisters from the indigenous community brought the sacred drum of peace and broke ground on the land for this beautiful building that we now work out of. With that sacred breaking of ground, we declared this building a sanctuary against violence, a new home for peace and a network that was created nearly six decade ago to promote peace and understanding among all communities. And here we have the Pacifica patrones mimicking their corporate twins, using police power to sustain their political point of view.

As a former member of the KPFA Local Station Board and a producer for 30 years, I am calling for the Pacifica National Board to immediately launch a truly independent investigation to thoroughly document who did what and when in KPFA and Pacifica management that led to this violent police action.

Also I am calling for an investigation as to whether local or national management tried to impede the documentation of police violence inside Free Speech KPFA. Those responsible for this brutal incident need to be held accountable, both legally and morally.

In conclusion, I must say to you I was shocked to hear the chair of the of the Pacifica National Board state, on KPFA in the wake of this violent incident, that she “takes her hat off” to the KPFA management for doing such a good job keeping “the mothership” afloat. I wonder if this Pacifica high official would have said the same thing if Nadra Foster, a Black single mom, had been tasered or shot or murdered.

Miguel “El Gavilan” Molina founded La Onda Bajita, broadcast on KPFA 94.1 FM at 8-10 p.m. Fridays, 30 years ago. He also covers Latino and indigenous news for Flashpoints, heard at 5-6 p.m. weekdays. Contact him at (510) 848-6767, ext. 241, or editorial@flashpoints.net. Watch a video of Miguel making this statement at www.blockreportradio.com.