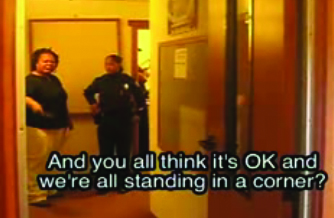 by Anita Johnson, producer and host of Hard Knock Radio

I enter Ujima and see two police officers and KPFA unpaid producer Nadra Foster struggling. Nadra is asking the police, “Why are you doing this? Stop!” The police say, “Calm down.” I ask, “What’s happening?”

That’s when all three notice I am in the room. Nadra asks me to help her. The police tell me to leave. They become increasingly violent towards Nadra. They are shoving her excessively, pushing and grabbing, hitting her arms and her legs, while talking to each other. I can’t hear what they are saying.

One officer looks at me and tells me, “Leave the room.” I refuse and say to the police, “Stop and calm down!” When that doesn’t work, I say to both the police and Nadra, “Wait and calm down.”

Nadra again asks for help so I leave the studio to look for help. I go into the hall and scream for any KPFA staff located in the area to assist. I can’t find anyone so I go back into Ujima to continue to be a witness.

When I return, the police are still struggling with Nadra. They are trying to handcuff her and then throw her down on the concrete floor. The situation becomes very chaotic. Nadra is screaming: “Stop! HELP ME! Get off me; I’m pregnant.”

One of the officers has his knee on her groin. Another one is pressing her arms against her chest and his full body weight is top of her. Nadra and the officers are rolling and struggling on the ground. Nadra is still screaming for help and saying, “Stop, I’m pregnant!” The police are screaming, “Calm down!” … and mumbling but I can’t hear the words. I’m in disbelief, stunned and shocked.

I again go out to the hallway screaming: “Help me, help me!” I notice some KPFA staff in the nearby Engineering Department. They appear to be listening but don’t leave the room nor respond to my cries for help.

At this point interim Program Director Sasha Lilley appears. I ask her for help and say, “What is happening?” She says, “We called the police.” I ask: “Why? Wasn’t there another option? You all could have talked to me.” I’m hysterical, frustrated and feeling totally helpless. I again ask Sasha for help, saying, “Someone needs to stop this.” Sasha says to the officers: “We don’t want to press charges. Stop this.”

The police continue their assault on Nadra, who is still screaming and struggling. I attempt to re-enter Ujima but the police tell me, “Get out or you’ll be next!” One officer advises me that it is in my best interest to leave and to stop taking pictures.

I leave the studio but continue to take pictures on my cell phone from outside the studio. I still hear Nadra say, “I’m pregnant.” There’s a lot going on at this point but I can no longer see what is happening inside Ujima. I hear one officer say, “She’s saying something about being pregnant but I don’t know.”

I tell an officer who’s speaking to me, “Nadra is pregnant.” Then other officers say: “It’s been confirmed. She’s pregnant. Get …” I forget the exact word they used for the piece of equipment they were talking about, but an officer leaves Ujima and comes back with a contraption that looks like a black straightjacket, which they put on Nadra.

Email Anita Johnson at hardknock@kpfa.org and visit www.hardknockradio.com to learn more about the KPFA show she hosts with Davey D and Weyland Southon every weekday at 4-5 p.m. Hard Knock Radio, billed as “A Talk Show for the Hip Hop Generation,” won its place on KPFA out of the massive resistance to the 1999 attempted corporate takeover of the station and the Pacifica network that included demands for shows appealing to young people and especially young people of color. The Bay View thanks Anita for her heroic effort to stop this attack on her colleague Nadra Foster. To see some of what happened that day and Anita’s role in it, watch this video recorded by Weyland Southon.