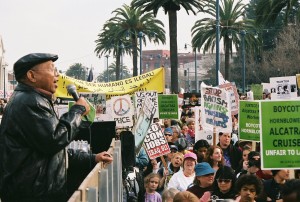 I tip my hat to the Berkeley Daily Planet for your coverage of news and opinions surrounding the brutal arrest at KPFA of young Black programmer Nadra Foster on Aug. 20: “Rough Arrest at KPFA Stuns Station, Community” by Judith Scherr on Sept. 4, “A Letter to KPFA Management and Paid Staff” by John F. Davies on Aug. 28 and yesterday’s “Healing KPFA” by five members of the paid staff and five board members.

As a member of first the advisory board and later the governing Local Station Board at KPFA through 2006, I witnessed events that I believe gave rise to what the writers of yesterday’s commentary call a threat of “civil war,” and I contribute these words to the struggle for a just peace. In my role as publisher of the San Francisco Bay View, which has recently been forced out of print by lack of funds, I find the term “civil war” an apt description of a conflict fomented by managers apparently oblivious to the everyday police war on Black people that I believe KPFA is obligated by its mission to cover, especially since the Bay View has been silenced, at least for now.

Excitement was high at KPFA in early 2006 as the board prepared to welcome Greg Guma to Berkeley as the first executive director of Pacifica since the hard won return of network headquarters to its birthplace there. But the welcoming committee I had volunteered for was sorely disappointed when Guma refused to meet with us.

A far harder blow, from which the station is still suffering, came soon after, when Guma appointed Lemlem Rijio as interim general manager of KPFA without any consultation with or ratification by the board, as required by Pacifica bylaws. During the prior period, when KPFA operated without anyone in the general manager’s office, management decisions were made by several members of the News Department, some of whom signed yesterday’s letter to the Daily Planet. It was widely believed at the time that those paid staff members preferred that the general manager’s office remain vacant but, as second choice, preferred Rijio.

Picking up on Guma’s style of management by decree, Rijio soon silenced the Program Council, de-recognized the Unpaid Staff Organization and appointed Sasha Lilley as program director, a position that Pacifica bylaws require the Local Station Board to fill. Thus, both the top managers at KPFA today got their current jobs through an undemocratic process that many of us protested at the time was in flagrant violation of Pacifica bylaws.

More importantly to listeners and the public, their appointments violated the trust that democracy in the form of listener governance – inaugurated after years of work to prevent ever again another corporate (whether NPR or commercial) takeover attempt like the one in 1999 – would bring new programming to draw thousands of new listeners and contributors to KPFA, especially those whose news and views are ignored nearly everywhere else.

What I consider a fatal flaw that must be amended in the bylaws is largely responsible for these maneuvers. Many of us who, as listener representatives, worked on the bylaws were unusually generous to the paid staff. Paid staff are almost never eligible for membership on the governing board of their nonprofit organization that is in charge of the budget from which staff are paid and the hiring of management to direct the staff.

Yet at Pacifica, fully a quarter of the 24-member Local Station Boards are staff members elected exclusively by staff. I have long advocated amending the bylaws to eliminate or reduce the proportion of staff on the board or at least to allow all members, including listeners, to elect them.

I am not anti-staff. I love KPFA and applaud the programmers who work hard to represent their communities and viewpoints. But I fiercely oppose a status quo that excludes – and brutalizes – young Black programmers and others whose status as among our society’s most oppressed demands a share of KPFA’s airwaves.

Another seed of today’s conflict planted days after Guma’s arrival in Berkeley was his expulsion of young programmers, mostly people of color, from the Ujima Studio – the same studio where, on Aug. 20, Nadra Foster was thrown to the concrete floor and beaten by Berkeley police. Again without any notice or consultation with the KPFA board, Guma temporarily closed Ujima, which means collective work and responsibility in Swahili, reportedly citing complaints that the presence of young Black people in the station during evening hours made some people uncomfortable.

Come on, KPFA, let’s all of us strive earnestly to implement Pacifica’s mission to “contribute to a lasting understanding” and peace among “all nations, races, creeds and colors.” Welcome all young people – and especially those most oppressed – to build the free and fair future they envision through KPFA airwaves and, by doing so, build a vastly larger audience and supporting membership.

My passion for KPFA has led me in the past to donate more than I could afford, but not during this fund drive – not until current management is democratically replaced. The current practice of ignoring, vilifying and brutalizing young Black programmers is intolerable.

Until new management reverses that practice and opens the station to all who will contribute to its mission, I ask those currently in charge to spare us the hypocrisy of using such great revolutionary Black heroes as Paul Robeson and the Black Panthers to raise money. Remember, the purpose of the Black Panther Party was to defend the Black community against police terrorism.

Willie Ratcliff submitted this commentary to the Berkeley Daily Planet with the notation: “As a former member of the KPFA Local Station Board who witnessed some critical events from which I believe the current conflict arise, I would like to submit the following comments.” Ratcliff can be reached at the San Francisco Bay View, (415) 671-0789, or editor@sfbayview.com.