Introductory note by Kiilu Nyasha: Herman Bell and Jail Muntaqim (aka Anthony Bottom) have been unjustly incarcerated in New York prisons for 35 and 37 years, respectively, are currently eligible for parole and by rights should have been returned to New York for parole hearings in July. Instead, they have been kept in solitary 24/7 lockup in the SF County Jail for nearly two years now on still more charges stemming from a “cold case” of the murder of a police officer in August 1971. For more information, go to www.freethesf8.org.

Herman Bell arrived in the Bay Area from New York in late May 2007 to face this extremely unjust prosecution of eight former Black Panthers and community activists from the late 1960s forward.

This prosecution is based on revenge and intimidation of anyone who attempts to change things for the better in this steadily devolving society – not to mention throwing California and San Francisco taxpayers’ resources down the toilet in a very big way.

Every day since May ‘07 has been a complete nightmare for Herman and our family. Confinement in the San Francisco County Jail has been devastating to what little quality of life Herman – as well as Jalil Muntaqim, who is also confined there – has experienced in New York prisons for three decades. 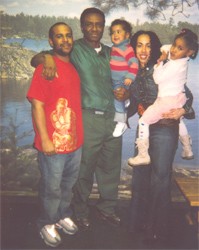 Herman was in general population in New York for almost the entire 35 years of his imprisonment – walking about the prison freely, jogging on the yard, coaching football and basketball, attending the few outside events held, such as poetry readings, attending college and achieving both his Bachelor’s and Master’s degrees, tutoring other prisoners in Black History and English writing skills, attending release-on-parole preparation groups, and enjoying contact visits with his family and friends. He even managed to continue his community service through an organic food project called “Victory Gardens.”

All of a sudden, overnight, this same man has to be chained and shackled everywhere he goes like he’s some kind of monster, has to visit behind glass and over a phone, and he’s locked in his cell 24/7 except for a couple hours of exercise a week and the limited visits on the weekend. He hasn’t had any fresh air now since he arrived in late May ‘07, except for two visits to a doctor.

Even worse, Herman has lost over 20 pounds and is always so hungry. He says the food there is the worst he has ever experienced anywhere.

My husband and I speak on the phone every night, and just thinking of the extremely inhumane deprivations he is suffering is very painful. He’s leading a very bleak existence; yet he is still always striving to reach out to others, to better their lives, offering his very valuable viewpoints in the form of various articles and poetry, and most of all demonstrating undaunted courage and compassion in the face of relentless punishment for his choice to struggle for a better world.

Our granddaughters, Sage, 6, and Simone, 3, were used to climbing up on Grandpa’s lap, laughing, tickling, hugging, singing, falling asleep in Grandpa’s arms. So it was and is very difficult for them to have to visit him behind glass, over the phone. At first they would leave the visits crying, and the baby would even try to tear away the glass with her little fingers. It’s been very difficult for Herman and me too, as we have had contact visits for decades.

Now it’s been well over a year since we’ve even held each other’s hand. Nevertheless, our family is there every Saturday for our visits with Grandpa – our son Kamel, our daughter-in-law Kihana, our precious little girls, and me. The jail will only allow three people per visit, so we even have to break up our family into the only two 25-minute visiting slots he is permitted on weekends/holidays only.

However, we do manage to make the absolute most of our time together, every single visit. We shall continue to bring joy into each other’s lives and lift each other’s spirits until one of these days, our Grandpa, Dad, Husband can come home.

Kiilu Nyasha, member of the Committee to Free the SF 8, Black Panther veteran, revolutionary journalist and Bay View columnist, hosts the TV talk show Freedom Is a Constant Struggle every Friday at 7:30 p.m. on SF Live, San Francisco cable channel 76. She can be reached at Kiilu2@sbcglobal.net, and Nancy Jacot-Bell, wife of Herman Bell, can be reached through her.

The transfer of SF8 defendants Herman Bell and Jalil Muntaqim from the San Francisco County Jail back to New York State for their rightful parole hearings has been blocked by both state governors for weeks and the 2 governors now want to deny this right for good. This comes despite previous agreements in the courtroom between the California State prosecutors, the presiding judge and, of course, the brothers and their attorneys.

Judge Philip Moscone signed an order in May allowing Herman Bell and Jalil Muntaqim to return to New York State for their parole hearings. All parties agreed at that time that the move would be temporary; Herman and Jalil waived their rights to fight extradition back to California. But on June 16, Judge Moscone rescinded his May 18 order due to pressure from the office of California Attorney General Jerry Brown, who has chosen to be the prosecutor in the case of the San Francisco 8.

If the men remain in California, they would be denied their parole hearing for years. All they are asking for is an opportunity to attend their hearings.

Please contact the governors of California and New York by phone, letter, fax or email:

Urge them to sign the amended executive agreements which will allow Herman Bell and Jalil Muntaqim (Anthony Bottom) to return to New York state to attend their rightful parole hearings.

On the San Francisco 8 case

Recorded address by Herman Bell to supporters of the SF 8

November 2007 – We gather at these venues to listen and learn, to show support and solidarity, and hopefully to depart with a clear sense of purpose, a nourished mind and an invigorated spirit. In recent times, we’ve had so little to celebrate and lift our spirits until Lynne Stewart, the Jena 6 and now, when six out of eight from the SF 8 were released on bail. None of this could have happened without strong community support.

Bail for the six meant that folks had to put up their homes and property, and that’s exactly what they did. A finer example of solidarity, support and sacrifice inspired by love and oneness of purpose could not be found.

Prosecution of the SF 8 bears grave implications for all of us, even for the FBI who – under the auspices of a “joint terrorism task force,” homeland security, Newkill or whatever they want to call themselves today – is manipulating this whole thing.

For years, we’ve been telling people about the government’s COINTELPRO scheme that has been crushing dissent and social activism in the U.S. by spying, jailing, torturing, disappearing and even murdering those not intimidated by it or cowed into submission. Need there be wonder why prosecution of the SF 8 is going forward!

We do not study history to be afraid; we study it to learn. And what history teaches us is that people really don’t ask for much, that they are not really interested in having a mansion in the sky or in the blinging glitz and glitter that they are told they must display to be somebody. All people really want or care about is to improve their lives and to have some kind of future that offers hope of better times to come for themselves and their children – these basic desires just don’t go away.

As social activists and community leaders, the SF 8, as well as countless others, are gravely concerned about the bigger social issues: concerned about our water, land, air, forest, about our very survival on this planet. Our civil liberties are threatened, our privacy continually violated, and the various branches of our government are accountable only to corporate interests and the rich.

We went to war based on a lie, which has devastated the national treasury, leaving a burdensome debt for generations to come and a national health care system a dream deferred. Our social security system needs fixing, and we need to bring an end to locking so many of our citizens in prison; more U.S. citizens are locked up by their government than are citizens of any other country in the world.

These times, these issues – the case of the SF8 – is about many things, including having a vision and the resolve to find a way forward that serves the needs and concerns of the people. In failing to oppose the corporate quest to privatize and commodify Mother Nature herself, our society – I dare say the Western world – has lost its way because of its misguided notion that the so-called sanctity of private property and unrestrained capital give license to own and control everything on this earth. Now that the period of consequences is upon us, blind faith is a painful and terrible thing to behold.

Malcolm X was correct in his analysis: We have been hoodwinked and bamboozled. Those we entrusted to lead and protect us have betrayed that trust. Now the whole country is in dire straits and picking cotton for corporate America. Yet, despite these dark and difficult times, things will get better when we make them so – when we commit to work for the freedom of our leaders who have been repressed, when we become that vibrant leadership ourselves.

Hear this on audio at www.freethesf8.org/docs/Herman.mp3.