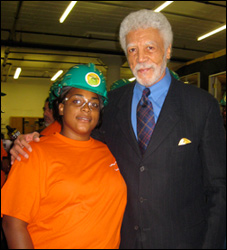 Oakland – Assemblymember Sandré Swanson, chair of the Labor and Employment Committee, joined Mayor Ron Dellums, Congresswoman Barbara Lee, Assemblywoman Loni Hancock and other local officials at a public unveiling of the Oakland Green Jobs Corps program. The Corps will serve as an employment pipeline, providing “green-collar” skills training and jobs to young adults, many of whom face significant barriers to employment.

“This is a proactive, aggressive program that will create local jobs in a sector that is the growth industry of the 21st century. In the midst of an historic economic downturn, this program provides the model for real economic stimulus: stable jobs for the people and communities who need them most,” Assemblymember Swanson said approvingly.

The Oakland Green Jobs Corps partnership was awarded to three agencies: Laney College, Cypress Mandela Training Center, Inc., and Growth Sector, Inc. Their partnership will result in training, environmental education and connections to green jobs to at least 40 low-income Oakland residents. The City of Oakland awarded $250,000 to the partners to implement this program.

“Funding this kind of important educational program is not just a good idea; it’s an economic necessity. California has lost $4 billion to home foreclosures, we face a $1.6 billion shortfall in our unemployment insurance and we continue to struggle with a 7.7 percent unemployment rate,” Assemblymember Swanson stated.

“In fact, many of our urban communities actually face double-digit unemployment rates. That is why it is so important for the federal government and the state to help fund such programs. As chair of the Labor and Employment Committee, I will be lobbying the governor and my fellow legislators to ensure we fund this program in partnership with everyone here today,” he added.

“The jobs that Oakland Green Jobs Corps creates can become an effective way to attack recidivism in California. Right now, seven out of 10 people who leave prison go right back in after a short time. In the end, the state spends over $10 billion on prisons, which is almost the total we budget for higher education. My task and the task of my colleagues is to redirect those funds to support programs like the Oakland Green Jobs Corps. That will help us not only to build careers for the people who need them the most but also make our neighborhoods safer while helping to turn the economy around,” Swanson noted.

“Although the success of this program requires the cooperation of many organizations and individuals, I am especially appreciative of the Alameda County Building and Construction Trade Council, led by Secretary-Treasurer Barry Luboviski, as well as the individual companies who have generously provided job opportunities to the Corps’ future graduates,” Swanson concluded.