The California prison guards’ union – one of the state’s richest and most reviled special-interest groups – is funding a multi-million-dollar attack on Proposition 5, the Nonviolent Offender Rehabilitation Act. The prison guards’ newest ally is Jerry Brown, attorney general, former governor of California and former mayor of Oakland. 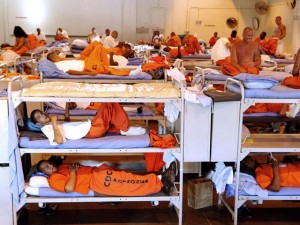 Prop. 5 is a modest and sensible reform of California’s corrections system that promises to reduce the state’s bloated prison population and, in the process, cut state spending by billions of dollars. The measure is supported by a wide range of treatment professionals, good-government types and former high-ranking corrections and law enforcement officials.

The prison guards, however, oppose Prop. 5. They don’t like the math. Fewer prisoners will mean fewer jobs and less overtime pay for prison guards. Today we released a new ad that will be running throughout the state that shows how the prison guards are sabotaging California’s future for their own self interest.

Prop. 5 would also forestall massive new prison construction. For taxpayers, that means saving $2.5 billion for each new prison that is no longer needed. For the guards, however, fewer prisons will mean less staff to run them – and possibly fewer new dues-paying members in the future. This is bad news for a union with burgeoning membership that boasts higher annual take-home pay than the governor. To put it bluntly, the prison guards’ union is built on the backs of human beings in cages.

Attorney General Jerry Brown’s role in all this is the most perplexing. He is either taking progressives for granted or figures they’ll give him a pass for cozying up to the prison guards and fighting a measure that offers drug treatment and a second chance to young people, nonviolent offenders and prisoners.

Since I am a co-author of Prop. 5, Jerry contacted me a couple of weeks back. Said he wanted to talk about Proposition 5. He called me on my cell phone while I was participating in a panel discussion about California’s prison crisis sponsored by UC Berkeley. I decided to duck out of the symposium. Months earlier, I had reached out to Jerry to discuss the details of Prop. 5, but those calls went unreturned. I figured that, if Jerry Brown was now ready to talk about Prop. 5, that would be a good use of my time.

“OK,” I say, “let’s talk.” Turns out, Jerry doesn’t want to chat about public policy. He wants to vent. He lectures me for five minutes about how, when he’s governor, he’ll solve the state’s decades-old prison crisis in his first month in office. He neglects to mention that the roots of the prison crisis date back to his first stint as governor.

The prison guards’ union is built on the backs of human beings in cages. Jerry Brown is cozying up to the prison guards and fighting a measure that offers drug treatment and a second chance to young people, nonviolent offenders and prisoners.

Jerry pounces: “Prop. 5 is anti-democratic,” he complains. I tell him that that’s an odd attack, particularly when Prop. 5 creates an independent citizen’s oversight commission, appointed by the legislature and governor, to bring transparency and change to the state’s prison system. And what could be more democratic than a voter initiative?

Jerry switches tack. He argues that Prop. 5 deprives him – and by “him” it is clear Jerry means the next governor of California – of too much power over prisons. I ask him whether he’s actually read Prop. 5. No response. I note that Prop. 5 in fact allows the governor to appoint two officials to head up the state’s prison and parole agency, not just the one allowed under current law. The governor also gets to appoint more than half the members of new oversight panels that, in turn, must run public hearings, take public comment and publish audits and reports on their activities. These panels provide new levels of transparency and accountability for prisons and for treatment programs statewide.

Jerry gets flustered. His angry pit-bull persona dissolves into more of a wet pug. “But the drug court judges oppose you,” he stammers. “True,” I respond. “But their opposition, like the prosecutors and prison guards, is ideological, not evidence-based.” I continue, “All of the state’s leading drug treatment and medical professionals – the folks who know the most about delivering substance abuse and mental health services to this population – support Prop. 5.” Also, recalling Jerry’s “anti-democratic” blast earlier, I note that the drug court judges voted to oppose Prop. 5 when their partners in the treatment community were out of the room.

Jerry wants off the phone. “Okay. Listen. This thing is complicated,” he says. “I need you to walk me through Prop. 5, line by line, so I can understand what you are doing here.”

“Great,” I say. “How about we talk later today or tonight, right after this prison symposium is over. I can meet you or go over it by phone.” Jerry gives me his mobile number.

Later that evening, I call Jerry. No response.

I call Jerry more than a dozen times over the next week, not only on the cell number he gave me, but also on two other numbers I have for him. I call every morning and every afternoon. I leave messages. Jerry has my home, office and wife’s cell phone numbers. He knows what time I pick up and drop off my son at kindergarten. Still no word from Jerry. I’m starting to think the facts don’t matter, despite his entreaty to grapple with the details of Prop. 5.

Two weeks later, Jerry accidentally answers his cell phone while getting in his car to go to Sacramento. It’s me. “Let’s talk,” I say. Jerry sounds bummed that he forgot to check caller ID. He says, “Can’t talk now. I’ll call you tonight at home.” I say, “Great. No hour is too late.” I give him my numbers again.

But Jerry was working the phones, after all. He’s done a press conference for No on 5. He’s inserted himself into the campaign, courtesy of the prison guards. They are now listed as among the largest contributors to “Jerry Brown 2010.” Their biggest gift to date: $825,000 worth of TV time starting this week for No-on-5 ads starring Jerry.

If those ads help Jerry, he’ll move one step closer to becoming CEO of one of the largest, most expensive and worst-performing penal colonies in the world. History suggests that in 2010 he will need some help with his prison problems. I don’t trust him to make the right call.

Daniel Abrahamson is the director of Legal Affairs at the Drug Policy Alliance Network and co-author of Prop. 5. This story originally appeared on The Huffington Post at http://www.huffingtonpost.com/daniel-abrahamson/jerrys-brown-nosin-with-c_b_139293.html. Bay View staff contributed to this story.

If no one else can persuade Jerry Brown to meet the hunger strikers’ demands, Mark Fiore can