Editor’s note: This story, originally published Dec. 14, 2005, is being republished today to mark the third anniversary of the state murder of Stanley Tookie Williams.

It was a “No Cookie, Cookie,” Bilal Sabir’s famous dessert guaranteed to hit the spot – but somehow it missed this time. The occasion – post state-sponsored murder, a situation not necessarily good for the appetite. I think the inclination was the linguistic affinity – Tookie … Cookie. Comfort food for the political upset once I arrived home from San Quentin Dec. 13 at 2:30 a.m. 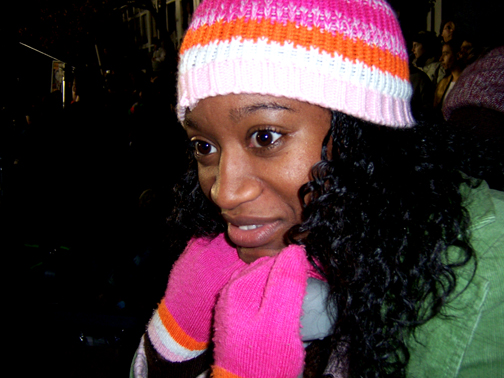 I still can’t believe it. Maybe if I refuse to watch the news or turn on the radio for a few hours, don’t open the door or buy a newspaper, I can pretend it was all a nightmare and wait for the sun to rise again and then again until the wrong is righted, what’s done is undone. But I was there. At 12:01, I remembered Stan Williams on the other side of the hill, one covered in uniformed men, riot gear on, poised and ready for trouble as reinforcements in helicopters circled overhead, often drowning out the speakers.

The scene was surreal and a bit too artificially bright to be real. The usual folks tried to sell me a paper, quiz me about the death penalty; still others asked for my phone number. I don’t know why young white anarchists assume every African person is in need of political education.

I ignore the bright lights, fake smiles, sympathetic yet clueless looks of empathy as news anchor in red suit blocks my view, her blonde hair unruffled, matching lipstick a slick smear where lips meet, her media techs pushy and territorial. White privilege spraying the air like Raid, I try to stay focused and remember the life about to be terminated just because certain people have the power to do so. This makes the scenario in front of me even more unpalatable. Why all the lights? Why all the noise? Why all the fanfare now that a man’s life is about over?

If this spectacle were not reason enough for every sane person to register and vote, I’m not certain what might be a better one. Over 2,000 people were there, the speaker’s list lengthy, and except for the children who spoke and then read from Tookie’s books, most of the talk was the tired rhetoric of the past which up to now has benefited everyone except the ones it’s supposed to help.

I was surprised to see so many people I knew, like Marina Drummer, Kamil Jabril, JR, Donald Lacy, Angela Davis, Fania Davis, Heru Nefera Amen, Sandra McGee, Kwami Yephet, Marcel Diallo …. Most, like me hadn’t come to any other executions, but this one was different.

Not in our name, a slogan made popular at the start of the Iraq war, took on additional meaning as each of us silently considered the language of capital punishment: “The people of the state of California ….”

Unless one consciously disassociates herself from the acts of terror committed on her behalf, then silence equals complicity. “Ignorance of the law,” as we’re told, “is no excuse.” Neither is ignorance of harm committed by such laws in one’s name by elected officials, whether they were the representatives of one’s choice or not.

Resistance is an active word, and so is change, both transitive. Both attach themselves to an object, something concrete, something measurable, something visible, and in the process make it into something else … we hope, something better.

Tookie’s thinking changed and when that changed, so did his life. This change is seen in the choices he made to eschew negative actions and to be a man of peace.

At one point I thought democracy belonged to all Americans, the same with justice. Tookie’s death is evidence to the contrary, the two – justice and democracy – are owned by white men in business suits who run the world and control many people in it. 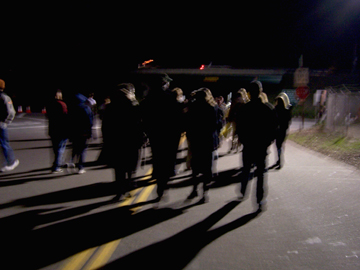 But not for long.

It was 12:15 … “take a deep breath,” someone advised. “Sometimes it takes 10-15-20 minutes before we know what’s going on.” These were veterans around me. One woman ran down the procedures for her friend.

Murder is wrong no matter who commits the wrong.

Tookie professed his innocence to his grave; and to substantiate this, new evidence was revealed just Saturday from a former inmate of the LA county jail which incriminates the LA Sheriff’s Department.

Nothing has changed, except now Black men don’t have to get off the sidewalk and walk in the street, their eyes down, when a white person walks by.

“Stay peaceful … hold onto Tookie’s legacy (of peace)” came from the stage.

Tookie stated just before his death that he was okay, that his conscience was clear,” Brother Fred Jackson, project coordinator for the Internet Project for Street Peace, shared. I’d just seen Brother Fred yesterday at the screening of “Redemption” sponsored by Oakland Councilwoman Desley Brooks’ office.

Tookie called in to speak to us. Executive producer Rudy Langlais was there too. We were all so hopeful. Desley told me about victory parties planned, and when I spoke to Sister Barbara Cottman Becnel, co-author of the anti-gang and violence books she and Tookie authored, she smiled and invited me for an interview once he was granted clemency or a stay.

The recitation of Tookie’s words helped me stay mindful about the reason for the gathering.

Minister Keith Muhammad called Tookie a scientist of social change. I had a déjà vu moment as he spoke: Saturday morning MGT classes at Temple 26 in San Francisco. Recitation of the Actual Facts, Student Enrollment Lessons and discussions from “Message to the Black Man.” I always wondered when the “Lesson to the Black Women” was going to be written, until Shaharazad Ali wrote hers. I’ll have to write it myself. Just as Tookie wrote his.

Each of us is responsible for his or her life. The answer lies inside each of us. We need to stop throwing away our power. Greatness fills many landfills.

While many people prayed for a California moratorium against the death penalty through Jan. 1, 2009, a bill authored by Assemblyman Paul Koretz, about to have a legislative hearing next month, a week behind the next scheduled execution – this time of Clarence Ray Allen – a lone voice shouted and cursed the night, and soon even that voice was silenced at 12:25 a.m. as we began to wonder what was going on.

We need to stop throwing away our power. Greatness fills many landfills.

The helicopters flew closer as we awaited information about Brother Stan. Was he still alive?

“Don’t kill in my name,” a sign read. “Blessed are the Peacemakers,” another stated. “It’s our ancestral territory …” a man whispered angrily. “If we’re going to do something, why not do something!”

I looked around at the potential guns pointed at us and where I could move if people went stupid.

At 12:34 we sang a Native American healing song.

At 12:35, Stanley Tookie Williams was dead. The state of California had murdered him.

A man whose greeting was the Swahili term Amani, or peace, was gone. What a waste, his loss incalculable now or ever.

I felt like the brothers and sisters must have felt when faced by lynch mobs – the barbecue for the day, their bodies. We turned around and began to the long walk back to the car. Crosses piled on the ground made travel hard, as did other discarded protest paraphernalia.