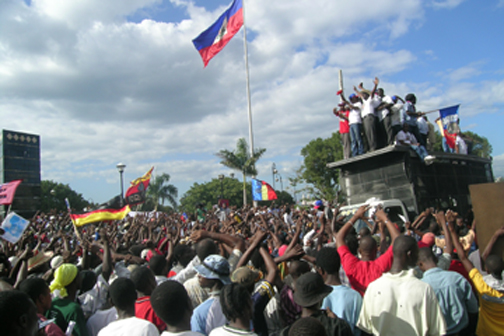 The U.S., France and Canada worked to oust the democratically elected government of Haiti in 2004 in a coup that was purposely cloaked in a so-called domestic rebellion. To this day an uncritical international press, that was itself culpable in hiding the truth behind the ouster of popular President Jean Bertrand Aristide, continues to parrot ridiculous assertions about the reality behind his overthrow and the intense campaign of political repression against his Lavalas movement.

During 2004-2006, thousands of Haitians were murdered by the police, jailed or forced into exile. What emerged was a wholesale campaign of violence waged against Lavalas that was largely maintained through the silence of human rights organizations and the international press. The unfortunate truth is that the police and their operatives in the Haitian state were often aided and abetted – at first, by U.S. Marines, Canadian Special Forces, French Foreign Legion and later by U.N. forces in Haiti. The ultimate purpose and intent of this violent campaign has been all too clear: to mutilate Lavalas and alter, through violence, Haiti’s political landscape. 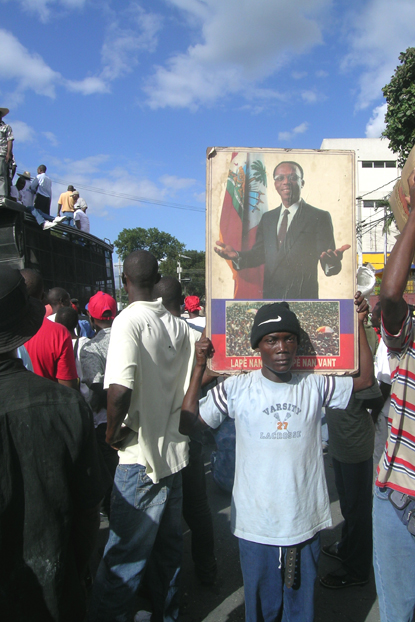 Tuesday, Dec. 16, was the 18th anniversary of Haiti’s first free and democratic elections that gave rise to the Lavalas movement which catapulted Aristide into the presidency in 1990. Thousands of Haitians took to the streets throughout the country to commemorate that day and to demand the return of Aristide, who now lives in exile in the Republic of South Africa.

They also demanded an end to the U.N. occupation, the release of all Lavalas political prisoners who still remain behind bars, and an end to the rampant profiteering by Haiti’s predatory wealthy elite that has resulted in growing misery and hunger. The event stood as a stark reminder to those policy makers who were behind the coup – and those who continue to maintain order based upon its outcome – that the Lavalas movement in Haiti is far from dead.

This reality raises several important questions. The first question is to those who supported the coup and the violent campaign against the Lavalas movement: Can you honestly say that Haitians are better off today than they were before the coup on Feb. 29, 2004? Did you really expect the intervention to improve Haiti when, in fact, all indicators are that Haitians are suffering today from levels of malnutrition and infant mortality that are considered high even by Haitian standards?

And for everyone concerned about Haiti today: As the presidential elections approach in 2011 and Lavalas reorganizes as a serious contender, once again representing the poor majority, will democratic elections be realized? Or will Haiti have to endure this endless cycle of foreign intervention all over again? Can real democracy prevail even as powerful interests, from foreign governments and Haiti’s wealthy elite to a plethora of non-governmental organizations, risk losing their investments in altering the political landscape and turning the page on the Lavalas movement?

If history is any indicator, the current supporters and apologists for the cynical nation-building and social engineering project Haiti has become in the international community have dug their tentacles deep into the flesh of Haiti’s body politic. As an indicator of just how deep, the president of the Haitian Senate, Kely Bastien, said earlier this week that the majority of Haiti’s national budget – provided by the international community – is managed by non-governmental organizations.

Still, they should know that the concepts of self-determination, freedom and liberty in Haitian culture run deep to the bone. Konbit, the concept of Haitians working for the benefit of Haitians, is not dead in Haiti. It quietly resides in the consciousness of the Haitian people and waits for the right moment to awaken.

Yesterday’s commemoration of Dec. 16 is but one of several reminders that Haitians have not forgotten what it is like to run their own country and tend to their own affairs. Contrary to popular belief, Haitians were not always forced to live off charity and rely upon the largess of foreign patrons.

For most Haitians, their dream is that this nightmare will soon come to an end and, for better or worse, that they will once again be free to rise and fall based upon their own strengths and efforts. That simple freedom, which many of Haiti’s patrons claim for themselves and take for granted, is the wellspring of dignity and self-sufficiency for any people. It is the real message of Dec. 16 in Haiti.

©2008 Haiti Information Project (HIP) all rights reserved. Kevin Pina, an independent journalist and filmmaker, is special correspondent on Haiti to Flashpoints, heard weekdays at 5 p.m. on KPFA 94.1 and dozens of other stations and on the web at www.flashpoints.net.