Review and interview by POCC Minister of Information JR 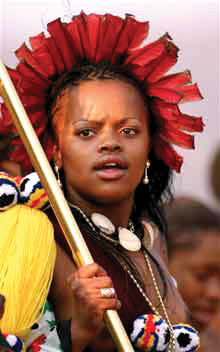 I have a 4-year-old daughter who constantly talks about wanting to be a princess like little girls of all classes and races do in this country. After she watched “Without the King” with me and got over how pretty and articulate Pashu, the rapping princess of Swaziland, is, she told me that she did not think it was right for the royal family to be so rich while the regular people have to drink water out of puddles on the ground, as one scene in the documentary portrays. Her pre-school summation on class spoke to the power of this film.

“Without the King” is not an activist film per se, but it intimately discusses issues that are pertinent to Swazi society – the King, the royal family and dissidents in the country. If you look at the bonus material, you can even see a more in depth interview with one of the 13 queens of Swaziland, as well as the King’s oldest brother. You can also see footage from an orphanage where the caretaker Siphiwe Hlophe talks about her work in Swaziland and her health, and there’s a homemade video with Princess Pashu at Venice Beach near Los Angeles, where she raps one of the verses she wrote. 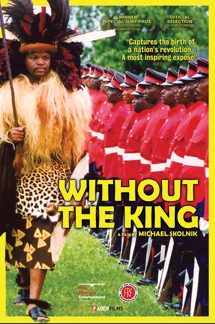 The film moved me to think about class within the Black community right here in the United States, as well as in the greater population, especially when 2009 will bring the first Black president. Many in the Black community are wondering how much of this “change” he says he stands for will materialize in “bailouts” for the poor and disenfranchised. Class is a topic that is seldom talked about, and “Without the King” handles the topic eloquently.

I caught up with the director of “Without the King,” Michael Skolnik, to discuss this very important film about the last governing monarchy in the world.

MOI JR: How did you come up with the idea for the documentary “Without the King”? Did you already know the royal family? If not, how did you get such access and get them to talk so openly about controversial issues in Swazi society?

Michael Skolnik: In 1997, as a college sophomore at UCLA, I decided to study Zulu – had always had an interest in visiting South Africa and figured if I was gonna go there, I should learn the language of the people. My professor turned out to be Swazi and was an advisor to King Mswati III.

Over the years, I got the chance to meet the king, and when he learned that I made movies, asked me to make a movie about his life. I happily agreed, as I thought he would make an amazing character in a film. When I got to Swaziland to film for the first time – I had been there four times previous – the access I thought I had to the king was quite different than what I was getting. 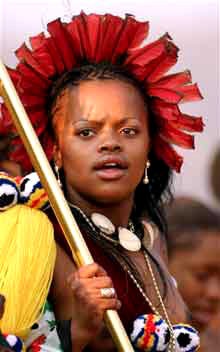 On Day 4, after waiting every night for hours to see the king at one of his many palaces, I ran into his daughter, the princess, in the parking lot. I had met her in LA when she was visiting with her father years ago, but now she was a woman. I asked her if we could film her and she agreed. From there, the film began.

As I have known the king and his family for many years, the king agreed to give me unprecedented access to their lives. However, when I got to Swaziland for the first time to film, the access was quite different than what had been promised to me. So, I had to make a number of adjustments the first trip, the biggest being focusing on the princess’ life more, as I had much more access to her daily activities.

MOI JR: How long did the shooting take? And what kind of equipment and crew did you have with you?

Michael Skolnik: I filmed over the course of a year, and we shot on high definition.

MOI JR: When you interviewed people from the neighborhood about their opinions of the royal family, did you get the feeling that a revolution was brewing and that political dissent is growing?

Michael Skolnik: When I was given the opportunity to talk to people from all over Swaziland about their daily struggles, I realized that this film is much deeper than just a portrayal of the king and his family. This is a country that has the highest HIV rate in the world – 42.6 percent – and the lowest life expectancy rate in the world – 31 years.

In my humble opinion, this is a country on the verge of extinction. We are not talking about a rare bird or an unknown insect in the Amazon; we are talking about a group of people that have been around for thousands of years. So, when speaking to people, of course I recognized that they were upset and scared at the same time. They want change and they want it now, so their country can survive. What kind of change they want is definitely open for debate, and I think that the film shows various viewpoints of the change discussion.

MOI JR: How do you feel being non-Black covering Black subjects from different classes in Swazi society?

Michael Skolnik: I feel humbled. Throughout my career, I have been fortunate to be able to meet people from all around the world and have them share their stories with me. As a white male in America, I was born with a tremendous amount of privilege and power. Without even taking into account the economic status I was born into, just being white and being a man put me at a tremendous advantage. And I feel I was lucky enough to recognize that at a young age.

I made a very concrete decision that if I had the opportunity to share the stories of those that do not have the chance to tell their own, then that’s what I would do. So, I have traveled the world during the past 12 years and made films about people whose stories should be heard by not just me, but by everyone. I look back, and I recognize that this is the power of our generation, a generation that I am proud to be a part, a generation that no longer accepts a culture of segregation, but rather integration. This is why I am proud to say I am part of the hip-hop generation. However, the last thing I can say is every time I have the chance to spend time with people who come from a different experience than I did, I feel blessed to be in their presence. It makes me a much better person.

MOI JR: Did the masses in the community where you were covering the resistance see your finished product? How did they feel about it? What about the royal family?

Michael Skolnik: I showed the film to the princess. I will respect her and not talk too much about her reaction or the conversation we had after the screening. I do not know if any other family members have seen the film – I hope so. I have been told that the film has been banned in Swaziland and that anyone in possession of the film can be charged with sedition. However, I know the film has been seen by many people in Swaziland and in fact there are organizations within South Africa and Swaziland that are using the film to better organize and recruit.

MOI JR: Princess Pashu seemed to be disturbed when she went to the orphanage. Off camera how would you describe her demeanor before and after this visit?

Michael Skolnik: I think her entire reaction was captured on camera. She was greatly moved by that experience, as was I. It was a moment in my life I will never forget, watching this beautiful young woman see with her own eyes the desperation in her own country.

MOI JR: What other documentaries have you done? What are you working on now?

Michael Skolnik: I am currently co-directing a documentary with Emmanuelle Schick about the evolution of the chemical industry. “Lockdown, USA,” which is a documentary about Russell Simmons and his quest to end the Rockefeller Drug Laws, will be released on DVD in January 2009. I am finishing another documentary with the same co-director from “Lockdown, USA,” Rebecca Chaiklin, about Wyclef Jean and his mission to bring peace to Haiti. And I am going back to narrative features, as I am directing a film that Brian Grazer/Imagine is producing about Haiti as well. I am also excited to report that I have officially partnered with FADER Films and we will begin to finance and produce great movies in the coming months and years.

MOI JR: Thank you for your time.

People can get this film from www.firstrunfeatures.com, netflix and Amazon.com. For more information on the Minister of Information JR and the Block Report Radio show, hit www.blockreportradio.com.

‘Harlem Godfather: The rap on my husband Ellsworth Bumpy Johnson’

‘Gem of the Ocean’: an interview with director and playwright Ayodele Nzinga

Review: ‘A Day Late in Oakland’