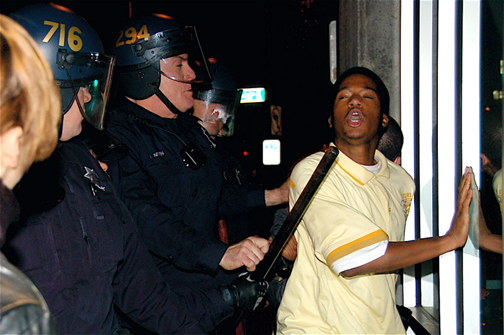 That the police often unjustifiably kill young Black men is well established. It’s the obvious tip of a far larger iceberg: systematic police brutality targeting people of color in the United States. Structured into the police state are lethal inequalities that ensure differential treatment, from surveillance, profiling and harassment to arrest, torture, imprisonment, conviction and the “capital” punishment – death. 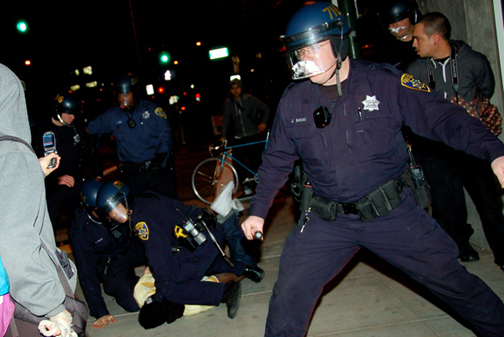 These are the all too frequent outcomes of policing as experienced by non-whites, historically and contemporarily. There’s an immense sociological literature to prove the point. Here’s just one peer reviewed study demonstrating that police violence is most common and deadly against non-whites and the poor, precisely because they are non-white and poor.

Is it any surprise then that this new year – the year of “change,” a mere 20 days away from the inauguration of America’s first Black president – has been rung in with gunshots? Two young Black men have been murdered on the streets of America by the police.

Happy New Year, America. This is your creed, your most terrifying and fundamental method of keeping “safe” your social order of grotesque wealth and privilege built upon poverty and exploitation.

A brief search of news reports shows far more questionable uses of deadly force by the police since Jan. 1 across the country. Nearly all killings and assaults involve young Black and Latino men targeted by the police.

In Oakland, California, Oscar Grant III was shot execution style by a BART police officer in front of dozens of horrified onlookers. Per the police state’s usual methods of operation in the aftermath of an unarmed Black man’s death at their own hands, the department circled its wagons against criticism.

As George Ciccariello-Maher shows us, BART, Oakland’s City Hall, and the whole establishment on up to the governor and out to the news media and much of the state’s white middle class citizenry has called for “calm” during the investigation. Now they’re decrying the “violence” of outraged protesters, mostly young people of color who have no other way to contest the injustice they see and feel. 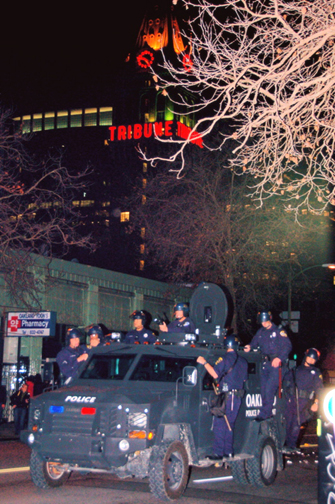 The “investigation” that supposedly will make everything all right is proceeding amid the establishment’s tacit backing and support of the officer who murdered Grant. The officer remains free. His voluntary resignation from the BART police force, initially framed as a kind of accountability by the media and authorities, is instead a means for the officer to extricate himself from any internal BART investigation. It has allowed him to hire legal council and largely recuse himself.

Meanwhile, about a hundred protesters have been jailed for expressing their rage in the streets. No one was killed at the demonstrations that rocked Oakland, even though a few protesters were shot with rubber bullets.

And still the authorities call for calm and understanding so that the system can proceed. The youths who marched in the streets on Wednesday night understand all too well what’s going down, how this system works. Grant was the symbol of so much more violence directed at their bodies and the very sinews of the communities. To expect any less than a street rebellion is to expect young working class people of color to adopt an attitude of suicidal resignation.

While the authorities call for calm, the youths who marched in the streets on Wednesday night understand all too well what’s going down, how this system works. Grant was the symbol of so much more violence directed at their bodies and the very sinews of the communities. To expect any less than a street rebellion is to expect young working class people of color to adopt an attitude of suicidal resignation.

Meanwhile, about 2,000 miles southeast of Oakland’s flatlands, in New Orleans, Louisiana, another young Black man is being buried by his grieving family. Another community is fuming about the police killing of Adolph Grimes III and the already bunk “investigation” promised by the authorities. In the wake of Grimes’ shooting by nine undercover NOPD officers, also in the early hours of New Year’s Day, the police department has orchestrated a similar damage control plan to deny real justice.

Just like the Grant case, the NOPD has conspicuously touted Grimes’ possession of a firearm – a legally owned and registered pistol – and a shotgun they say they discovered in the trunk of his car, days after his death when they finally searched it. The point has been to cast suspicion on Grimes’ character and to play to racist assumptions that any young Black man with a weapon must have been a criminal and deserving of death. The same tactic is being used in Oakland. Grant, while totally unarmed and cooperative, has been subjected to a posthumous whisper campaign bringing up his possible, but not confirmed, criminal record.

The result is that sympathy disappears for the victim who is raced and written up as a karmically justified thug corpse. This is an especially effective police tactic in New Orleans where blog comments on several news articles about Grimes’ killing have expressed satisfaction that another one of “them” has been taken off the streets. Such rhetoric would never follow the questionable shooting of a young white person by the police. One commenter on the Times-Picayune‘s web site  echoes a mass sentiment grounded in this tactic stating:

“Everyone in this city gripes about the crime, yet when cops are proactive, it’s always the ones who complain the loudest who are ready to tar and feather them for a job well done.”

Grimes, a graduate of one of the city’s most prestigious high schools, had no criminal record. He was the father of an 18-month-old baby, husband and hard worker living in Houston, Texas.

While Oakland’s rage against police brutality has taken form as a street rebellion, the response in New Orleans has been more restrained. Not because the affected communities are less angered or saddened. Instead, the hyper-active violence of the police state in New Orleans seems to have taught many a painful lesson over the years: Stand against the police and you too could end up dead. Especially if you too are young and Black.

On Thursday, Jan. 8, a protest in front of the police station garnered only two dozen citizens. As if to scare away even these critics, the police sent out at least six plain-clothes officers from the building to stand around across the street, monitoring the activists. One undercover officer filmed the entire protest. When asked by a photographer from the Times-Picayune who he was with, he reportedly responded, “That’s not for you to know.”

Living in a world on edge: ‘It might not be safe to be here’