As a student of history, of politics and of music, I viewed the recent presidential inauguration with considerable interest. 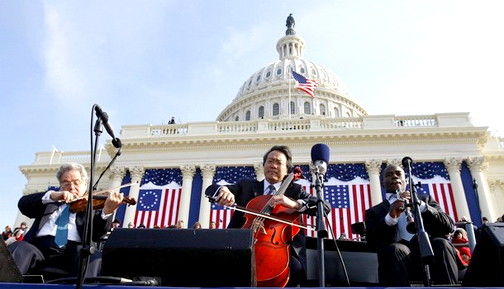 And while it was obviously a moment of historic proportions, it can’t be said that it held surprise. That’s usually because politics tends to flatten highs and lop off lows, as politicians attempt to appeal to the broadest base.

That’s also because political systems strive for the safety and security of protocol – the safe refuge of precedent – to give the image that all is well, that the U.S. endures and the empire is essentially unchanged and still regnant.

I therefore beheld it from a distance – interested, yes, but not engaged.

If anything was utterly remarkable, it was the vast throng, standing for hours in the biting cold for as far as the eye could see.

Yet, for all the glitter and spectacle, what moved most was something quite unexpected.

John Williams’ composition (he of “Star Wars” and “Jaws” fame), “Air and Simple Gifts,” performed by violinist Itzhak Perlman, cellist Yo-Yo- Ma, clarinetist Anthony McGill and pianist Gabriela Montero, was a breathtaking piece of musical mastery. Perlman began the piece, his violin sounding a mournful dirge that was almost funereal. He was joined shortly thereafter by Yo-Yo Ma’s deeper cello, which echoed this theme, painting a picture of wintry mourning, of emotional heaviness.

This mood was shattered by McGill’s light, airy clarinet, which was as triumphant as the coming of spring. By the time Montero graced the keys, the theme had wholly changed. From winter to the bright warmth of spring, from dissonance to ebullient unity.

To say this was a composition of beauty and brilliance would be understatement.

It was a work finely tuned to its time. It was a music nicely pitched to the passing of a political era.

It teaches us that music, at its best, can be magical.

It was so wondrous that I wept.

‘Air and Simple Gifts’ by John Williams at Obama Inauguration