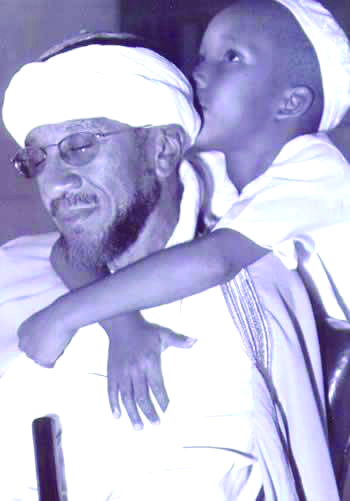 Kiilu Nyasha and Colia Clark, two veteran freedom fighters, eyewitnesses to history, explain who Imam Jamil is and why we must assign a high priority to winning his freedom:

For those of you who are too young to know who Jamil Al-Amin is: He became known as H. Rap Brown back in the ‘60s when the fascists literally made up a new law to stop him from traveling around the country organizing, agitating for Black liberation. It was called the “Rap Brown Law” and prohibited “crossing state lines to incite a riot.” Of course, we know who was doing much of the so-called rioting in the ‘60s. We’re witnessing police riots all over again today. I remember a book he wrote titled, “Die, Nigger, Die.” And that’s exactly what they appear to want us to do now. Jamil was once Minister of Justice of the Black Panther Party – always a servant of the people. We must come to his rescue just as he struggled to rescue us. Power to the people! – Kiilu Nyasha

We must stand firm and demand the release of this innocent man from behind these prison walls. Please call the number below to place your demand for humane treatment and immediate release. He helped us get civil rights and voting rights. Let us help him get the human right to return to the community outside of prison walls in great physical and spiritual condition. Free Jamil Al-Amin! Free Mumia! Free all political prisoners! In Solidarity, Colia L. Clark

Jamil Al-Amin has been moved to what is known in prison as “the hole.” He was strip searched and placed in a cell with no bed, no control over the lights and no shower. They have taken his Qur’an and all of his other personal property.

Please take some time contact the warden and to get the word out to all of your contacts. We all need to write, call, fax or email Ron Wiley, the warden of ADX prison, to inquire as to why Jamil Al-Amin has been placed in the hole.

No information has been given as to why this transfer was made, but nothing could justify this inhumane treatment.

In the past when action has been taken by the public on Jamil Al-Amin’s behalf, changes have been made that benefited him. Please remember to keep your correspondence brief and to the point, and avoid threats, rambling etc. We want positive changes to be made.