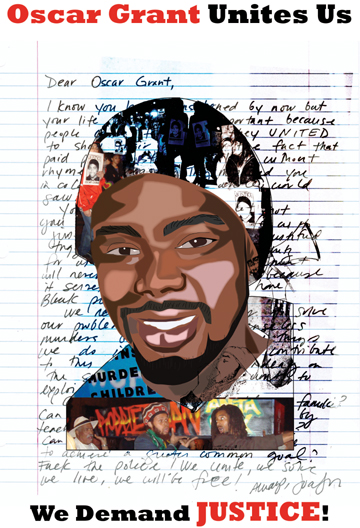 Demolished property
Can be replaced.
The once
Full lives
Taken by law enforcement
Never are.

Brutality, never an “accident.”
It’s systemic
And replicates itself
In different cities to the nth degree.

Bleeding
Stony hearts blame such handiwork
On “a few bad apples.”
And everyone knows
How that tired old maxim goes.

Tell that to the last
Victim inside the chalkline.

Subway platform
Was the killing field.

The truth cannot be erased,
Try as the guilty might,
Covering their crime.

Father of one,
Age 22.
His name joins
A seemingly endless
Sea of names,
Compendium of martyrs
To their same last sights:
Uniforms & weapons drawn.
Manifested
Needless State violence
Upon the unarmed.
A little Black girl of four
In Hayward goes to bed
Without her father tucking her in.
A Brown woman sleeps
Without her lover’s face to awaken to the next morning.

Reason for anger,
Cause for alarm.
The powderkeg
Called Oakland exploded twice.
Now that a legitimized
Slayer has been captured & released
Into the general public on bail,
A new explosion looms over the future’s horizon.

More fire
Put to the ‘keg.
Perhaps the murderer’s protectors
Will take notice this time
Because that young father they’ve targeted
Was one of us –

He could’ve been anyone

Anyone Black & Brown
Could be the one in submission, lying face down
In the path of a lethal device
Engineering their quick demise.

Dee Allen is a local poetry writer, spoken word performer and activist from San Francisco, who can be reached at Pathogen@SINISTERSPIRITS.COM. He writes, for the Oscar Grant Memorial Arts Project: “This was the best way I could pay homage to the memory of an African working-class man from Hayward. Considering what he went through minutes before his death at the hands of Bay Area Rapid Transit police officers Mehserle and Pirone, who should’ve been indicted and punished two months ago, the outpouring of community support needs to continue, nationally and locally. The fight against police brutality and corruption needs to continue. Bay Area Rapid Transit’s management needs to know that the public will not forget this act of violence committed by their own officers on those who depend on their subway train system for transportation. No community – Black, Brown or White – needs any more young sacrificial lambs slaughtered because of some cop’s racist, classist powertrip.”

*Glossary: The Oakland protests to the Jan. 1, 2009, BART police murder of Oscar Grant.

Nina Serrano can be reached at ninaserrano34@gmail.com.

Forty-one shots and 19 hits!
That terrible nine millimeter sound –
with hollow point bullets strewn all around.
And Amadou Diallo WAS DEAD before he hit the ground.
A life – snuffed out in the wink of an eye.
Then the killers went free, while a mother cried.

Oscar Grant the third
Whose young voice will never be heard?
Because of a coward, and racist RAT
Who put a bullet INTO HIS BACK
Then took his hate, along on his flight.

But throughout days and half the night
The people raged and took up the fight.

A community’s pain and struggle, so well invested
That Johannes Mehserle was finally ARRESTED.

But the struggle it seems was to no avail
When a racist judge granted him bail.
But don’t worry, good mothers, let’s remain as ONE
Because our struggle for his justice has only begun.

So don’t stop the march or neither the rally
til the whole group of that night will face the tally.
We have marched it seems throughout our history
But the year ‘09 will see us through victory.

Abner Louima, dancing to the rhythm of a third world beat,
Stepped out of a club and onto the street.
Was suddenly arrested and brutalized,
Then after the beating was – SODOMIZED
And this heinous crime was done by who?
You guessed it my people – the punks in blue.

Patrick Dorismond, MURDERED and put to rest
By New York’s finest, Ghouliani’s best.
Thousands came to join the family
To pay their respects in peaceful harmony.
The police then attacked them -WOE AND SHAME
But the people responded with some of the SAME.
They burned the flag and overturned barriers.
Then policemen responded with personnel carriers.
But the people united and had their way.

And so the cops learned that dreadful day,
What even Al Sharpton would have to say –
Not to mess with the people when they come out to pray.

To the murderers in blue, hear my accusations:
You serve as the soldiers of the ruling class,
But your days are numbered, and your killings passed
Cause it’s time for the people to whip some ass.

We’ve seen you murder workers and persons of color.
Destroyed Native people and other cultures.
Then laid claim to some eagle,
When you’re really vultures.

To the people in the audience I’m here to say:
Will you heed my message or turn instead
Go back to your computer and live in your head
While they’re MURDERING BLACK FOLK.,
Just shooting them dead

To the family of Oscar Grant III

Curly read this poem on Feb. 20 to community gathered in support of the family of Richard Lua. Richard Lua was murdered by San Jose Police on Feb. 11. He went into medical stress from a taser shot when he was trying to get into his home and died at the scene. 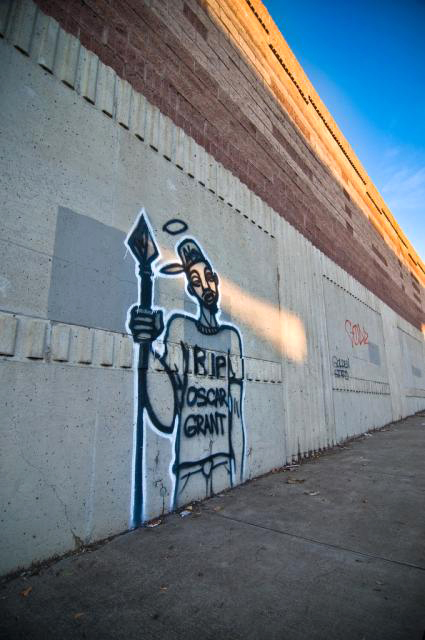 Early in the morning on New Year’s Day, 22-year-old Oscar Grant III was shot and killed in Oakland, California, by a Bay Area Rapid Transit agency police officer. Grant was unarmed – the young Black man’s arms behind his back, his face pressed down against the cement. Onlookers video-phoned the horrific spectacle as his life was taken from him.

The goal of the Oscar Grant Memorial Arts Project is to gather the creative works dedicated to Oscar Grant from artists, musicians, writers, photographers and others. Any form of creative expression will be accepted. It could be a video of a dance work, audio, song, poster, photo, art project, links to web pieces etc. Selected portfolio work will be featured in several Bay Area publications, print and online. If you have any questions or would like to contribute to this project, contact christinejoy@urbanhabitat.org. All submissions should be sent to artwork@urbanhabitat.org by March 21, 2009.

People are angry. Thousands have been appalled by the Oscar Grant shooting and have taken a new stand to fight injustice. Many have chosen to creatively express their stance through art. Songs have been written and dedicated to Oscar Grant. Poems, paintings and posters have been created. Graffiti artists have painted murals.

For this project, Media Alliance will act as a clearinghouse, collecting and archiving copies of the material and coordinating its presentation by partner publications, including Urban Habitat’s Race, Poverty & the Environment Journal, Media Alliance, InColor magazine and Street Spirit Newspaper. This work is supported by a grant from the Akonadi Foundation.

This project is co-sponsored by Media Alliance and Race, Poverty and the Environment. Media Alliance’s mission is to defend, develop and strengthen independent media to support the creation of a truly democratic society and to build capacity of low income people and communities of color to create and be represented by media responsive to the communities needs. MA helps create alliances between media creators and media consumers to bring light to under-reported issues, build public support for fundamental rights to communicate and lift up best practices for the inspiration of a broad range of communities, regionally and nationally.