According to a new civil rights report published at UCLA, “Reviving the Goal of an Integrated Society: A 21st Century Challenge,” by Gary Orfield, schools in the U.S. are currently 44 percent non-white, and people of color are rapidly emerging as the majority of public school students. Latinos and Blacks are the two largest groups.

However, Black and Latino students attend schools more segregated today than during the civil rights era. Schools are still separate and not equal more than 50 years after the U.S. Supreme Court case, Brown v. Board of EducationBrown v. Board of Education. Orfield’s study shows that the most severe segregation in public schools is in the Western states, including California, not in the South as many people believe.

This new form of segregation is primarily based on how urban areas are geographically organized – as Cornel West so passionately describes – into vanilla suburbs and chocolate cities.

Schools remain highly unequal, both in terms of money, and qualified teachers and curriculum. Unequal education leads to a diminished access to colleges and future jobs. Non-white schools are segregated by poverty as well as race. These “chocolate” low-income public schools are where most of the nation’s drop-outs occur, leading to large numbers of virtually unemployable young people of color struggling to survive in a very troubled economy.

There is a white people’s side of segregation as well. Diminished opportunity for students of color invariably creates greater privileges for whites. White privilege is a concept that is overtly difficult for many whites to accept.

Whites like to think of themselves as hard working and whatever they achieve is due to deserving personal efforts. In many cases this is in fact partly true: Hard work in college often pays off in many ways. What is difficult for many whites to accept is that geographical and structural racism still serves as a significant barrier for many students of color.

Whites often say racism is in the past, and we need not think about it today. Yet, inequality stares at us daily from the barrios, ghettos and behind prisons walls. Inequality continues in privileged universities as well.

An example of white privilege is how Sonoma State University in California (SSU) has recently achieved the status of having the whitest and likely the richest student population of any public university in the State of California. Research shows that beginning in the early 1990s, the SSU administration specifically sought to market the campus as a public ivy institution – offering an ivy-league experience at a state college price.

Part of this public ivy packaging was to advertise SSU as being in a destination wine country location with high physical and cultural amenities. These marketing efforts were principally designed to attract upper-income students to a “Falcon Crest”-like campus.

To achieve the desired outcome of becoming a wine-country public ivy SSU administration implemented a special admissions screening process that used higher SAT-GPA indexes than the rest of the California State University (CSU) system. According to Lani Guinier and Gerald Torres in “The Miner’s Canary,” high SAT scores correlate directly to both race and income with little relationship to actual success in college.

SSU also conducted recruitment at predominately white upper-income public and private high schools throughout the West Coast and Hawaii. The result was that SSU freshmen students with family incomes over $150,000 increased by 59 percent since 1994 and freshmen students from families below $50,000 declined by 21 percent (2007 dollars). The campus remained over three-quarters white during this 15-year period, while the rest of the CSU campuses significantly increased ethnic diversity.

We are at a time in society when a majority of the population has elected a Black president of the United States. This presidency is a hugely symbolic achievement for race relations in the U.S. We must not, however, ignore the continuing disadvantages for people of color and the resulting advantages gained by whites in our society.

Institutional policies and segregation contribute to continuing inequalities that require ongoing review and discussion. Efforts against racism must continue if we are to truly attain the civil rights goal of equal opportunity for all. 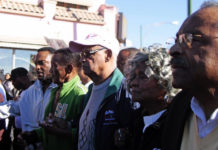