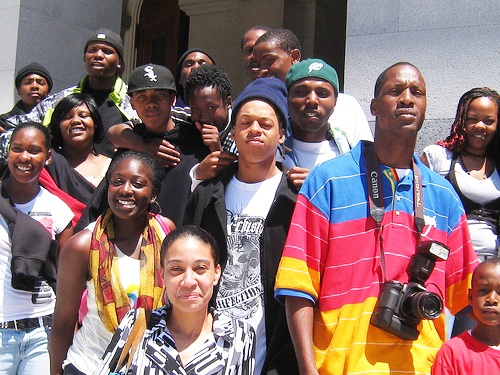 Signs reading “Justice for Oscar Grant,” “Abolish the Three Strikes Law” and “Demandamos Justicia Ya!” floated above a sea of ralliers of different ages, religious beliefs, genders and ethnicities.

From Bakersfield up to Sacramento, activists, teachers and family members came together to rally against laws that have failed to serve the betterment of their communities.

The third installment of the Caravan for Justice took place Tuesday, May 26, on the steps and inside the State Capitol building in Sacramento.

“It’s a hot day today,” said Minister Christopher Muhammad. “But it’s going to be even hotter for the legislators if they don’t listen to our demands.”

Minister Muhammad, the leader of the Nation of Islam as well as the executive director of Muhammad University of Islam in San Francisco, is one of the main organizers in the Caravan for Justice.

So far the Caravan for Justice movement has been a success. Their last visit to the Capitol on April 8 caused two legislators, Tom Ammiano and Leland Yee, to initiate a bill promoting “civilian oversight” to handle complaints against the Bay Area Rapid Transit (BART) police in the wake of Oscar Grant’s death. The protest has also focused on issues involving gang injunctions and succeeded in prompting Sen. Roderick D. Wright and Leland Yee to inject a bill to combat them.

Dana Blanchard, a fifth grade teacher from Berkeley, brought 14 of her students with her to participate while voicing her concerns to the crowd. She understands that not everyone can get to the protests but she offered other alternatives: signing petitions, writing letters and attending events when you have the time.

“I brought my students with me so they can learn how to stand up for what they believe in,” she said.

Blanchard said that the state we live in doesn’t care about its students. She is worried about where her students will end up if they don’t know their rights. She says that she tries to let her students understand that there may be things that they disagree with and there may be things that they don’t understand but she always makes it a point to let the children know that their opinions do matter.

Tom Helme, 26, graduate of Humboldt State University, spoke about the project that he and a group of other community members started called Cop Watch in the city of Modesto. 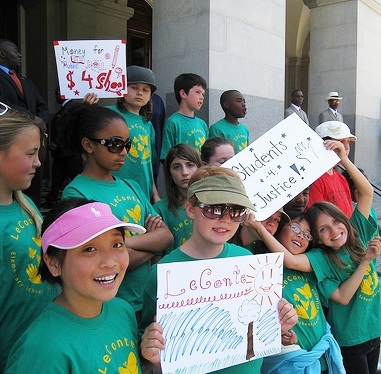 “We decided to take matters into our own hands after realizing how much police can get away with,” said Helme. “Now when we see someone getting wrongfully harassed by the cops, we pass them out our ‘know your rights’ card.”

The know your rights card spells out a step by step process of what one should do when being questioned by the police. One part of the card reads:

“If the police stop you, ask, ‘Am I free to go?’ If not, you are being detained. If yes, walk away. Ask, ‘Why are you detaining me?’ To stop you, the officer must have a ‘reasonable suspicion’ to suspect your involvement in a specific crime (not just a guess or a stereotype).”

“Getting involved in protests like this gives us a sense of community,” said Helme. “We are transforming energy into action.”

Bisola Marignay, an activist who participated in the caravan insisted that although there are a number of issues that were addressed in the protest that she would not have it any other way.

“Separation is a weakening factor,” she said. “When we come together, our energy is that much stronger.”

Oralia Cortez, 62, along with her group, Families to Amend California’s Three Strikes (FACTS), came from Bakersfield to get their word heard. Cortez has a vested interest because her son is serving 35 years to life for his third strike for stealing $1,000 dollars. She says that in order to influence the legislature, you must use your words as your weapon.

On Nov. 2, 2004, the state’s voters rejected an amendment to the statute – offered in Proposition 66 – that would have required the third felony to be either “violent” and/or “serious” in order to result in a 25-years-to-life sentence. In the last week before the election, Gov. Arnold Schwarzenegger launched an all-out campaign against Prop. 66. “It would release 26,000 dangerous criminals and rapists,” he stated. When, in fact, there were only 8,000 people sentenced to 25 years to life under the Three Strikes Law.

Currently, there are more than 8,400 inmates serving possible life terms under the three strikes law, according to the state Department of Corrections and Rehabilitation.

“Wickedness prevails when good people do nothing,” she said. “An unjust law is no law at all.”

According to Minister Christopher Muhammad, the fourth Caravan for Justice is scheduled to take place sometime next month. Plan to get on one of the dozens of buses that will take you there from around California. For more information, visit www.caravanforjustice.com, email info@caravanforjustice.com or call toll-free (877) 549-8657.

Crystal N. Carter, a 2008 graduate of San Francisco State University, is a member of the Bay Area Black Journalists Association (BABJA). She writes for ColorLines Magazine and can be reached at ccarter6@gmail.com.

These 10 videos, recording most of the day’s activities, were made by Kevin Vongkhamchanh, 21-year-old documentarian, of KVTV Productions. He can be reached at kevon_88@yahoo.com.