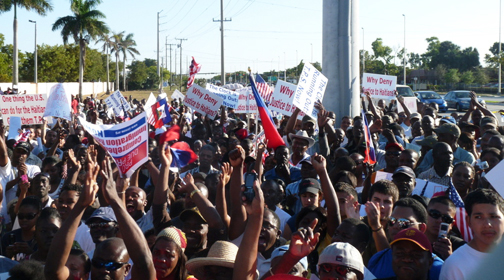 Pompano Beach, Fla. – Over 500 demonstrators gathered in front of the remote immigrant detention jail known as the Broward Transitional Center in Pompano Beach, Florida, last month to demand that the Obama administration stop the threatened deportation of some 30,000 Haitians back to their strife and storm battered country.

The rally was boisterous but peaceful and well-organized. The crowd demanded TPS (Temporary Protected Status) for Haitians, which was previously denied by the Bush administration. TPS has been granted in recent years to nine countries plagued by war or natural disasters: El Salvador, Honduras, Liberia, Montserrat, Nicaragua, Sierra Leone, Somalia and Sudan. It allows refugees from those countries to live and work legally in the U.S. The designation is effective for a minimum of six months and a maximum of 18 months.

After four storms in August and September 2008 brought widespread death and destruction to Haiti, the U.S. government suspended Haitian deportations for three months. But expulsions resumed after Dec. 5, sending dozens of Haitians back to their homeland since then. Between January and December 2008, 1,024 Haitians were repatriated, said Barbara Gonzalez, a spokeswoman for U.S. Immigration and Customs Enforcement or ICE.

In February, U.S. immigration officials announced that 30,299 Haitians were subject to immediate deportation back to Haiti.

Jonel Lemy, a Haitian-American lawyer with the Haitian Lawyers Association, told the Sun Sentinel that he has seen an increase in deportation cases in the last six months, even taking the three month reprieve into account.

“Arrests are up,” Lemy said. “People are being arrested as they drop their kids off at school or on their way to work.”

Lending visibility to the rally were hip-hop star Wyclef Jean and his younger sister Melky Jean, who is also a singer. She performed a passionate song in Kreyol and said that TPS for Haitians was “only fair.” She founded and helps run the CARMA Foundation, which provides shoes and other relief to poor children in Haiti.

Lavarice Gaudin, a leader with the long-standing grassroots organization Veye Yo based in Miami’s Little Haiti, addressed the hundreds of demonstrators on behalf of the group’s founder, Father Gérard Jean Juste, who couldn’t attend the rally due to poor health. Lavarice telephoned Jean-Juste, who then addressed the crowd by phone, which received him with warmth and enthusiasm.

Other speakers and singers communed with the crowd, expressing solidarity with the Haitians held in the nearby detention center. FANM’s Marleine Bastiene asked Wyclef why he had felt compelled to attend a rally that was not in his schedule.

“When I found out this [rally] was happening, I decided to come and ask President Obama to stop deportations to Haiti,” he replied. “Even though he’s dealing with the economic crisis we are facing, Haiti is in extreme crisis, he has to act immediately to stop all deportations to Haiti; otherwise they will have huge problems in the island which will have repercussions back in the U.S. ultimately.” 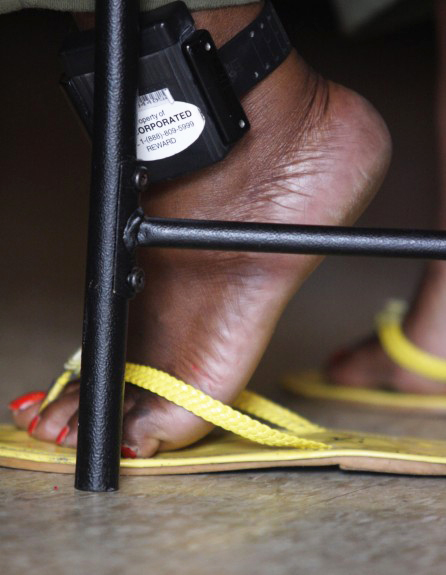 Of the 30,000 Haitians with deportation orders against them, 600 are in detention centers and 260 are allowed to stay at home and in their communities, although their movements are monitored with ankle bracelet transmitters.

Haitian President René Préval, who has also asked Washington to grant TPS to Haitians in the U.S., has effectively blocked deportations by having his government refuse to grant would-be deportees travel documents.

“President Obama, the time has arrived to right this wrong,” said Marleine Bastien to the crowd.

The world capitalist crisis and soaring jobless rate in the U.S. put great pressure on Obama to deport undocumented workers, as right-wing politicians urge. But Obama has lots of political capital to lose with Haitian-Americans, one of his power bases, if their undocumented compatriots are deported. Conversely, his administration gains lots of easy political capital if it grants TPS, a very short-term measure which does nothing to address the fundamental injustice of U.S. immigration restrictions and their enforcement.

Clearly, many in the crowd had high hopes that their continued mobilization would sway the Obama administration to grant the TPS that the Bush administration denied. “We will continue to protest and take our message to Washington, and we expect President Obama to support us,” lawyer Jonel Lemy said.

© Haiti Liberte, a newspaper distributed in Haiti, France, Canada and the U.S. and headquartered in Brooklyn, encourages reprints. Email editor@haitiliberte.com.