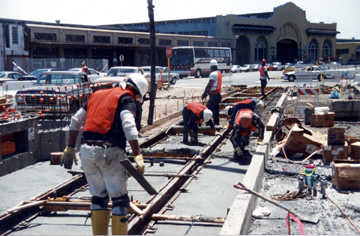 Want a job fixing up public housing – earning a big juicy piece of the stimulus pie? The San Francisco Housing Authority is inviting contractors to bid May 7 on almost $5 million in contracts to paint and repair the housing where many of us live. That will create hundreds of jobs – each one paying enough to support an extended family.

This is San Francisco’s first stimulus money, and I’m urging every one of you to stand with me and fight for our fair share of the work. The law is on our side – public housing residents must be hired for at least 25 percent of the work and minority and women business (MBE/WBE) participation must be at least 20 percent – but the law won’t be enforced unless we make our demands loud and clear.

Pack the next meeting of the Housing Authority Commission on Thursday, May 14, 4 p.m., at 440 Turk St. in Downtown San Francisco. We’ve been locked out so long from work we’re legally entitled to that I think we should claim ALL the jobs and contracts.

Let me list the work that Housing plans to do and then tell you why we won’t get any of it without a fight. All of the nearly $5 million comes through HUD out of American Recovery and Reinvestment Act (ARRA) – or “stimulus” – funding that’s intended to put the people back to work. That’s us!

These stimulus funds will create high-paying jobs in the housing developments where many of us and our loved ones live. These jobs are ours – by law and by right – but we won’t have a chance of getting them unless people who look like us can win the contracts.

I know many of you have tried to work construction over the past decade since nearly all the Black contractors were forced out of business, and I know that few have succeeded. Rarely do the large white-owned construction companies that get nearly all the work hire Blacks – union or not. Now we’re making a comeback – all of us, Black workers and contractors together.

We all know the plain truth: If Black contractors don’t work, few if any Black workers will work. So if you want a job, it’s in your interest to know why the Black contractors who WANT TO HIRE YOU won’t have jobs to give unless the power of the people forces the Housing Authority to do the right thing.

In construction, workers must be paid weekly, but contractors don’t usually get paid for weeks after each phase of their work is done. Meanwhile, in order to cover payroll, they need business loans. Since the economy took a nosedive, newscasters have told us again and again that all businesses need loans to survive.

In comes racism. Banks rarely loan money to Blacks. They “redline” Black businesses in Black neighborhoods, meaning they exclude loan applicants by race and home base. Companies that issue construction bonds and insurance do the same.

Black contractors can’t compete for the stimulus jobs unless they can borrow money and bond and insure their work. That’s why HUD requires local housing authorities to make loan funds available to disadvantaged contractors. The same mandate comes with all federal funds, such as U.S. DOT (Department of Transportation) funds for BART, Muni and AC Transit. We’ll soon need to fight for our fair share of those jobs too and for the loan funds that will enable Black contractors to bid and hire us.

I’ve talked with Housing Executive Director Henry Alvarez and some members of the Housing Authority Commission about setting up a $20 million revolving loan fund for disadvantaged contractors that charges no more than 3 percent interest. They’re listening but they’re making no promises. We need to turn up the volume.

Stimulus funds are our tax dollars. They are being returned to local governments to create jobs for us, the taxpayers. Only when we have good jobs will the economy recover.

Public housing needs these repairs. Homeless families are dying to move into the hundreds of apartments that are now boarded up.

Call the Housing Authority Commissioners at (415) 554-1200 or email them at leev@sfha.org. Tell them
• We demand our piece of the pie!
• We demand the stimulus jobs!
• We demand an end to the lockout of Black contractors who want to hire us!
• We demand a loan fund to enable our contractors to compete so they can hire us!