… and dismantling the non-profit industrial complex

by Lisa Gray-Garcia aka Tiny 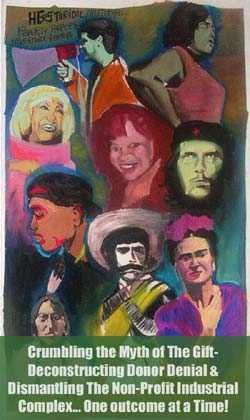 I just wonder what part of re-thinking he didn’t understand. I began reading an op-ed entitled “Re-thinking philanthropy” by William F. Shultz published recently in the American Forum. From a quick e-glance at the subject line I was filled with excitement, imagining a critique of the rooted-in-slavemaster hierarchy becoming seeds of the non-profit-industrial complex crabs-in-a-barrel system that non-profit organizations barely survive on and compete with each other over crumbs for. But alas, no, I would be sadly disappointed as I read on, seeing only a vague questioning of non-profit organizations who receive public money but don’t provide health care to their workers.

The lofty title and the barely challenging thoughts left me wondering what part of re-thinking didn’t Schultz understand. Doesn’t the notion of “re” anything imply that you will be asking the hard questions – like who gets access to wealth, how wealth and the earth’s resources were stolen from the original stewards of the earth only to be controlled and disseminated by folks who have nothing to do with its labor force, its gardens, its oceans, its resources?

How development is never led by countries and peoples called “developing nations.” How dreaming, conceptualizing and strategic planning about money has been done by poor folks throughout the centuries but that knowledge, those dreams, that scholarship is never valued for the complicated work that it is but rather is seen as unimportant only because the folks doing the strategic plans, the schedules, the budgets, the work plans are working poor mamaz and daddyz, abuelitas and aunties and uncles.

During the first 200 years of the theft of indigenous people’s land, destruction of resources and death of peoples and communities known as European colonization in the U.S., the missionary ideals and practices of Christian charity were replaced by the capitalist and patriarchal pattern of philanthropy. One of the earliest examples of philanthropists were benevolent slave owners who “took care of their slaves.”

From that frightening template of patriarchal domination, philanthropy was implemented by corporate moguls like John D. Rockefeller, Leland Stanford and Andrew Carnegie who used the process of giving away their money to appear as though they were caring about people, rather than just making profit while they sponsored and launched well-funded studies and endowments and created fellowships, grants and entire institutions around eugenics, a terrifying fascist and racist pseudoscience created to achieve so-called racial purity, eventually adopted by Hitler to rationalize the Nazi beliefs and practices of murdering Jewish peoples and disabled folks.

Philanthropy is only a tool

But of course you can’t blame philanthropy. After all, it’s rooted in Eurocentric, Western values of capitalism, which promote, demand and rely on separation, ageism, individualism and self-determination to produce an ongoing supply of consumers – isolated, separated from their families, consuming new couches, new cars, a separate set of silverware and dishes, not to mention apartments and houses. These values directly impact the programming decisions and priorities of an organization’s development, transforming the agendas of well-meaning and sometimes even revolutionary organizations rooted in poor communities of color into programs that perpetuate rigidity and harm on indigenous, multi-generational, care-giving communities.

The results of these values’ impact on organizations include the creation of youth-only programming for indigenous youth whose cultures value eldership and family, even to the harming of a community’s deep cultural structure or the complete separation and de-linking of naturally linked cross-movements such as an organization working for tenants’ rights and organizations working to advocate for homeless families and children. These values also lay the groundwork for the punitive systems of harm perpetrated by the non-profit industrial complex.

In another emulation of capitalist values driving non-profit funding the same way as market shares determine the for-profit market-driven world, non-profit organizations are forced to pursue funding led by that year’s sexy initiatives. On more than one occasion at what I call a step and fetch it grant interview where the grantor decides whether you, the grantee’s issue or project, is important enough to fund, I have actually heard the word sexy used to describe poverty, disability, racial justice, domestic violence, homelessness and global development.

This process has only worsened due to the economic downturn. Large foundations are using the excuse of the downturn to fund even less, demand even more and widen the gap between communities in poverty leadership and who drives development decision-making.

So what would it look like to re-define development and fundraising? To practice what we at POOR Magazine call “Revolutionary Giving”? It would begin with the recognition that just because people have money, have inherited money, or have access to money and connections that they inherently hold the knowledge needed to distribute that money.

Further, to understand that people who have struggled to raise children in poverty, take care of elders, keep multiple low-wage jobs or navigate multiple systems like welfare, education, social security and/or project housing in fact hold a deep scholarship about the use and distribution of resources. Similarly, that values of caring, interdependence and eldership as defined by indigenous folks and folk of color aren’t just nice ideas but actually need to drive the core values of organizational development and funding initiatives for poor communities of color.

Finally, to even consider a new form of philanthropy and giving, it must be cleansed of its eugenicist, racist past and redefined as a form of reparations that centers giving within the concept of reparations and the redistribution of the wealth, resources and land that was stolen from indigenous communities and poor communities of color locally and globally. The people who in the beginning of time were the stewards of the now very sick earth, who remain invested in its thrival and growth and who survive directly on its gifts and harvests.

Register now for the upcoming Revolutionary Change Session: Crumbling the Myth of the Gift, Deconstructing Donor Denial and Dismantling the Non-Profit Industrial Complex … One Outcome at a Time, a three-day seminar June 19-21 at the Westbay Conference Center, 1290 Fillmore St., San Francisco. It is presented by the Race, Poverty and Media Justice Institute (RPMJ) at POOR Magazine.

This session is designed for conscious folk with race, class and/or education privilege from across the globe who are interested in exploring, implementing and practicing truly revolutionary expressions of giving, equity sharing and change-making. We will deconstruct the lies intrinsic in philanthropy, reconstruct the truths of humanity, care-giving, sharing and community and practice a new form of equity sharing we at POOR Magazine call “Revolutionary Giving.”

Lisa Gray-Garcia aka Tiny is a poverty scholar, welfareQUEEN, revolutionary journalist and the author of “Criminal of Poverty: Growing Up Homeless in America.” She co-founded POOR Magazine and Poor News Network with her Mama Dee.

Beds for Bayview: Your voices count

Judge Thelton Henderson to keynote 2009 Justice Summit: ‘Defending the Public and the Constitution’