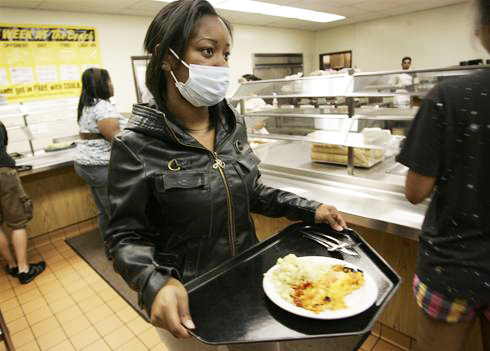 “In population medicine, the community replaces the individual patient as the primary focus of concern.” – Judith S. Mausner, M.D., M.P.H., in “Epidemiology: An Introductory Text”

Influenza is a highly contagious viral infection spread from person to person by direct contact with secretions from the mouth or nose, infected droplets spread by coughing or sneezing and contact with contaminated objects including shopping carts, computer keyboards, money and passenger seats in buses and cars. Just about everyone has had the flu. Most people catch a seasonal flu in the fall or winter. It makes you feel very tired!

There are simple things you can do to avoid becoming sick during a flu outbreak. Washing your hands, staying home when you are ill, coughing and sneezing into a tissue or the sleeve of your garments, wearing a mask in public, and avoiding crowds and intimate contact with people who are sick and their personal items are steps you can take to stem the spread of a flu epidemic or pandemic.

Despite the ability of health officials to make short term predictions about what type or “strain” of flu will emerge from year to year, the extent of illness and death may go largely unchecked. During one three-year cycle there were 86,000 more deaths from flu in the U.S. than public health officials predicted. During the 20th century, the world experienced three influenza pandemics leading to the death of 654,000 Americans; the last one was the Hong Kong flu of 1969.

Our immune system can protect us from invading viruses because of defenses in our skin, our white blood cells and our antibodies to the foreign proteins in the “coat” of the virus – called antigens. The flu has always been a serious public health problem because the virus has the ability to change “coats” each year. Flu viruses can take on new and more deadly antigens each year that interfere with the ability of health care providers to detect, treat, diagnose, immunize and prevent the major infectious disease in the United States with the greatest impact on death rates.

The outbreak of the worldwide swine flu epidemic captured immediate attention because it is a new strain – a combination of a virus found in pigs that changed enough to cause infections in farm workers in Mexico with other known flu viruses including influenza A. There are billions of people on earth who have no “herd immunity” to a new virus because they have received no immunizations or antiviral medicines like Tamiflu and have not built up their immune system to fight off the attack of this “superbug.”

The swine flu virus captured international attention at a time when the World Health Organization was most concerned about another “new” virus causing a worldwide epidemic. The WHO has been watching the H5N1 virus that is pandemic in birds because humans have no natural immunity to the virus. The CDC believes a pandemic caused by bird flu could attack up to 30 percent of people in the U.S. and kill up to 2 million people. About 30 million people could miss work and the economic hit on a nation recovering from near collapse could exceed $675 billion!

A “new” virus can cause a more serious infection and death than the known flu strains A, B and C. This is why over 160 people have died in Mexico in the last few days. Many of these people were young adults who delayed treatment and developed a deadly pneumonia. Although a small number of swine flu cases have been documented in the U.S. – 109 as of April 30 – most of the cases have been mild. The only confirmed fatality outside Mexico so far is a 22-month-old boy who died of swine flu in Texas, though he had contracted the disease in Mexico City.

Some health experts believe the virus that has struck Americans may be a milder strain. I think that “host defenses” may be playing a role in how seriously people respond to the same virus. Many Americans are privileged to access health care sooner for milder symptoms and may also benefit from better nutrition and overall fitness … particularly tourists wealthy enough to travel during the current economic crisis.

For many years health experts have feared a worldwide flu pandemic. Pandemic flu is a global flu outbreak that could start anywhere, spread quickly around the world and cause more illness and death than seasonal flu. Flu pandemics have happened every 10 to 40 years for the last 500 years. During the pandemic flu of 1918, 50 million people died around the world.

The swine flu epidemic has not reached pandemic levels. It was recently upgraded by the World Health Organization to Phase 5. Though this is one level below pandemic, the pattern suggests the virus is not well adapted to humans.

A true pandemic is classified as Phase 6. There is increased and sustained transmission within the general population. A pandemic flu could last many months and up to two years. There could be illness in up to 30 percent of the population and many deaths. Up to 50 percent of people would miss work and many healthy people would quarantine themselves to prevent getting sick. Children would be dismissed from school and schools, restaurants and public gathering places could be shut down.