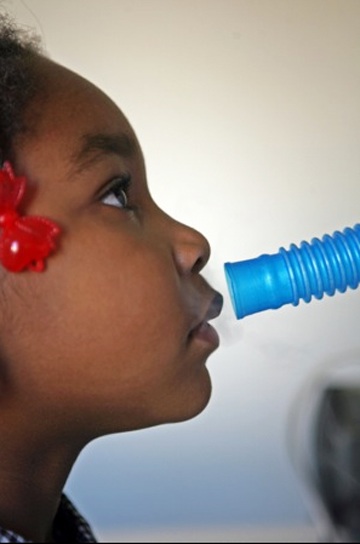 Talking to Dr. Washington Burns the other day I learned some pretty shocking information: 37 percent of the adults and 20 percent of the kids living in West Oakland have asthma and children living in this community are seven times more likely to be hospitalized for breathing related illness than any other children in California.

And Alameda County as a whole is no prize, with one of the highest overall hospitalization rates among 5-17-year-old youth.

I learned this bit of info while sitting inside the Breathmobile, the new mobile asthma testing facility run by the Prescott Joseph Center, where Dr. Burns is executive director. And while the numbers are shocking on the first mention, it’s something West Oakland residents have been battling for years.

For the last 14 years the Prescott Joseph Center has been somewhat of an oasis for West Oakland residents seeking information on a variety of health and wellness issues. The center, located only a short distance from the Port of Oakland, is home to the Asthma Education Center, the only place in the area where those without insurance – a large percentage of the residents – can receive care and instruction on breathing related illnesses. And while the education center has been around since 2001, the Breathmobile is a new solution to an old problem: access to quality health care in low income communities.

I’ve repeatedly heard residents express their frustration at how hard it was to see a qualified doctor. Many people I spoke with were working two and three jobs to support their families and taking time off for doctor’s visits usually just wasn’t an option. 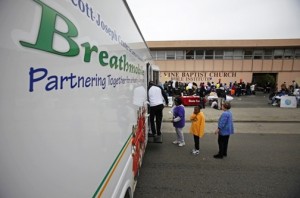 The goal of the Breathmobile is to take the hospital to the people, instead of the other way around. Beginning in July, the clinic will be traveling to area events to provide on the spot diagnoses and assistance.

But while providing quality care is one issue, Dr. Burns and Mary Frazier, the Breathmobile’s RN, brought up another important point. Even if the resources are there, the people have to value and use them or they still won’t work.

Ms. Frazier talked about a series of informal surveys they conducted with various Prescott Joseph clients. When asked their most pressing concerns, most people listed lack of money and quality jobs as the main issue. After this was violence followed by a list of other concerns.

Even with the abnormally high level of documented cases, asthma and breathing related illnesses ranked somewhere between fifth and seventh with most people. These estimates were echoed by the chairwoman of West Oakland Acorn, Shirley Burnell, who we quoted in the initial Newsdesk story.

She said following a showdown at a May 2 Port of Oakland meeting between residents and truckers – 10,000 trucks spewing diesel exhaust roll in and out the neighborhood daily to pick up loads at the port – that West Oakland residents and local children with asthma have been excluded from the discussion. “West Oakland is the ones that’s being impacted by all of this,” Burnell said. “And they’re the people that are the least considered here.”

Nevertheless, when Ms. Burnell and her team asked residents similar questions about their biggest concerns, they got nearly identical answers. How do you help people who, for whatever reason, aren’t inclined to receive the help?

As much as this story is focusing on the immediate dangers posed by the Port of Oakland and the diesel particulates produced by the trucks, it’s clear that there’s a much bigger and more complicated issue at hand.

While much of the debate on reducing emissions from the Port of Oakland has revolved around trucks, diesel pollution from the trucks is estimated to make up only 4 percent of West Oakland’s overall toxic burden.

A much larger percentage has been attributed to the international shipping companies that rent the ports. Yet attempts to impose fees to pay for pollution controls have been sidetracked by global trade regulations and opposition by the state of California and even special interest groups in Oakland and the Bay Area. 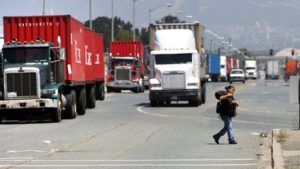 Fees targeting the shipping containers that pass through the Port of Oakland are usually opposed by the Oakland Chamber of Commerce, Alameda County Supervisors Scott Haggerty and Nate Miley, and the Waterfront Coalition – a Washington, D.C.-based group of importers, exporters and shipping companies.

These parties have repeatedly expressed concern that any new fees would only encourage shipping companies to abandon the Port of Oakland in favor of a cheaper competitor.

However, a 2006 study conducted by Energy and Environmental Research Associates and funded by the Coalition for Clean Air and the Natural Resources Defense Council found little evidence to support this theory.

In each of the ports included in the study – Los Angeles, Long Beach and Oakland – research shows that any proposed fees would have to reach $43 for each 20 feet of shipping-container capacity before the ports saw any significant reduction in international traffic.

Proposed fees for all three ports have been around $30 per 20 feet of shipping-container capacity.

Opponents also said that international ships are protected under the Commerce Clause of the U.S. Constitution, and therefore fall under federal jurisdiction, making taxation by the port – or state government – impossible.

Despite this opposition, the ports of Long Beach and Los Angeles both instituted new container fees in 2007. And in May 2009, California Assemblyman Jerry Hill, D-San Mateo, introduced a bill to pressure the ports to speed up environmental efforts.

Just about any long-term West Oakland resident can rattle off a list of health issues affecting their community: toxins from cargo ships docking at the nearby Port of Oakland, diesel smoke from Port-bound trucks, pollution from the two freeways that border the neighborhood, illegal dumping and lack of accessible health care.

In fact, research funded by the Pacific Institute found that some of the area’s 403 toxic hot spots date back to post-World War II construction — and that nearly 82 percent of West Oakland residents live near one of these potentially contaminated sites.

A 2008 study by the California Air Resources Board indicates that West Oaklanders are exposed to diesel toxins at almost three times the levels of the rest of the city. As a result, children living in the 94607 zip code are seven times more likely than other California youth to be hospitalized for asthma and related issues.

Incremental changes have been made on both state and local levels, including the port’s current Comprehensive Truck Management Plan. Yet many locals feel that significant improvements are still a long way off.

“There’s a lot of talk. People talk about how ‘this needs to be done, we’re going to do this,’” said Shirley Burnell, a community activist and co-director of West Oakland Acorn, “but still things are being pushed out. Instead of doing something today or tomorrow or next week, we’re still talking years.”

Disraeli Hives, 41, was born and raised in West Oakland, and has seen effects of poor air quality on three generations of her family. Both she and her mother have been diagnosed with asthma, as have eight of her 10 children. The family is on a regular rotation of inhalers and respiratory pumps, and Ms. Hives only recently started breathing without the use of an oxygen tank.

Hives said that almost two thirds of the children on her block have some form of respiratory illness, but that getting regular care has been an uphill battle, as many of her neighbors are dependent on public transportation.

“A lot of kids down here got asthma and their parents can’t afford to buy a new car or a used car for that matter,” Hives said, “so they’re on foot or catching buses, and you know how long you got to sit at the AC Transit.”

Mary Frazier, a registered nurse with the Prescott Joseph Center – a nonprofit service agency and home to one of the only health clinics in the area – has seen how the dearth of accessible health care contributes to larger social issues.

“How long does it take for you to get to Kaiser from here or to the Children’s Hospital or Highland (by bus)” she asks. “It’s an all day outing, so you lose time at work, kids lose time at school, the kids don’t get good grades in school, you lose your job, so it’s part of this cycle of the diseases of poverty – like diabetes, obesity, asthma and respiratory problems.”

This cyclical pattern is what inspired activists like Ms. Burnell to champion environmental causes, after initially focusing on other social concerns like job security.

“After I got involved I saw that it wasn’t just the jobs; it was the environment, and that needed to be cleaned up because so many people have asthma. So even if you do have jobs, you’re sick all the time,” Burnell said.

Dr. Washington Burns, Prescott Joseph’s executive director, said that low wages further complicate the issue, along with violence, drug use, lack of jobs and the general stress of day-to-day survival.

“In an area like here in West Oakland,” he said, “the low economic status of the residents has a bearing … I’m not saying that air quality isn’t a factor, but there are multiple factors.”

To address these diverse problems, Dr. Burns’ organization hosts the West Oakland Asthma Coalition, a network of community groups that address health concerns at both the grassroots and policy levels. 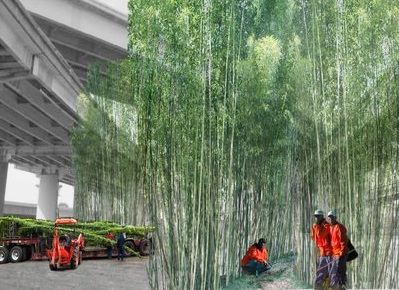 These include the Breathmobile, traditional research and policy programs by partners such as the Pacific Institute, as well as more experimental efforts — such as the Bamboo Biofilter, which plants fast-growing bamboo near truck facilities in the hopes of cleaning the air organically.

For residents such as Ms. Hives, improving the health of West Oakland will require community awareness, research, regulation — and patience.

“We’re a strong community” she said. “We been through a lot but we’re going to be here. We’re going to keep fighting.”

This story is part of the Bay Area Toxic Tour series sponsored by Spot.us.