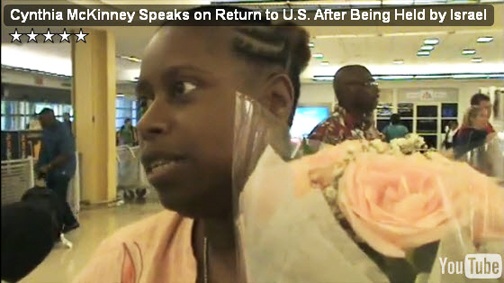 Minister of Information JR caught up with former Congresswoman Cynthia McKinney, the Green Party’s 2008 presidential candidate, upon her return to the U.S. from a week’s incarceration in an Israeli jail. She and the Free Gaza 21 – the crew and passengers, including political leaders, human rights workers, Nobel Peace laureate Mairead Maguire among them, and journalists, of the boat “Spirit of Humanity” – had been boarded, assaulted and kidnapped while sailing in international waters by a fleet of Israeli warships.

They had been carrying tons of humanitarian aid – medical supplies, toys and children’s art supplies – and construction materials to Gaza to break the blockade that has locked Gazans in a nightmare since the attack by the U.S.-funded Israeli military on Gaza in December and January. Thousands are still living in tents, unable to rebuild because of the blockade.

This interview with Cynthia McKinney, conducted by Minister of Information JR for POCC Block Report Radio, was recorded and broadcast Thursday, July 9, on Hard Knock Radio, broadcast weekdays at 4 p.m. on KPFA 94.1FM and other major stations around the country. You could hear this interview at www.blockreportradio.com.

Another blockade is that of the major media on news of McKinney’s voyage to bring help, hope and the world’s attention to the Gazans’ plight. The following article enables us to understand the significance of Block Report Radio breaking that blockade.

Had it not been for Twitter, I doubt that I would even have been aware that Cynthia McKinney was held hostage in Israel after attempting to deliver aid and supplies to the Palestinians. There has been a resounding silence on this issue as CNN, MSNBC and other mainstream media sources rush to give us the latest news on the death of Michael Jackson.

Jackson was truly an iconic figure, however the man is dead and Cynthia is alive. His memorial is receiving massive coverage and the announcement that his body would be present was considered breaking news. Even Alaska Gov. Sarah Palin’s resignation has garnered more media and internet attention. Though McKinney is safely back on U.S. soil, her wellbeing during her ordeal was of little concern.

As celebrities and media personnel rush to speak about the ways in which Michael Jackson transcended race, the erasure of the plight of McKinney proves that race and gender continue to divide the country.

Her mission was righteous and her intentions good, yet it matters not because the world places very little value on the bodies of Black women. “If Israel fears for its security because Gaza’s children have crayons then not only has Israel lost its last shred of legitimacy, but Israel must be declared a failed state,” McKinney said.

Despite her accomplishments, McKinney cannot escape the legacy of her mother’s womb. The media has gone to great lengths to paint her as radical, wild and untamable. One may not always agree with her methods or her arguments, but the reduction of her to an almost animal-like caricature over the course of years allowed her detainment to be deemed unimportant.

Imagine if a white male politician had been held captive by a foreign country. Regardless of what we consider to be the impetus for the detainment, his value would be enough for this to be heavily reported in the media. Israel may be considered a friendly state; however, the welfare of an American citizen should take precedence in this situation. There was not even a strongly worded statement on her behalf demanding her release.

Her voyage to break the blockade of Gaza was a response to Obama’s call to action on behalf of the Palestinian people, and his silence was her reward.

“State Department and White House officials have not effected our release or taken a strong public stance to condemn the illegal actions of the Israeli Navy of enforcing a blockade of humanitarian assistance to the Palestinians of Gaza, a blockade that has been condemned by President Obama,” McKinney said in a statement posted on the Green Party’s website last week.

McKinney is a Black woman and therefore the desire to identify with her is minimal. No matter how successful a person of color becomes, few white people would change places with her because a Black identity is still considered “less than.” People can congratulate themselves on being able to recognize the talent or skill of a person like Michael Jackson or Queen Latifah but when it comes right down to it, if our safety, health or happiness is an issue, it is irrelevant because we are all considered disposable bodies.