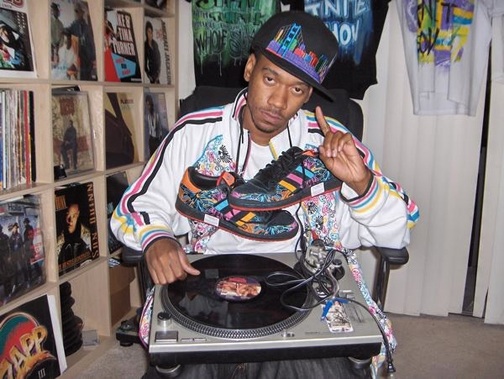 DJ Fresh is a legend in the arena of DJing around the world but he is also known for his contributions of putting out lesser known artists right here in the Bay Area. DJ Fresh is a dude who you may catch hanging out with Bicasso of Living Legends fame one day, and the next day he might be in the studio wit’ young hood mascots like Yung Moses, DLO or Sleepy. You can’t put Fresh in the box of being backpacker or gangsta; he’s just hip hop. Check out DJ Fresh in his own words …

M.O.I. JR: How did you get into djing? Can you talk a little bit about the history of djing in your family?

DJ Fresh: My cousin DJ 40 had turntables and I use to sneak and use ’em. My pops did a little DJing back in the day. My two brothers are both active DJs as well – DJ LS-1 and DJ Dummy. I was just fascinated with the “wucah wucah” sound. I heard Run DMC and Leaders of the New School scratch songs and I was hooked.

M.O.I. JR: A lot of people see DJing as a Filipino phenomenon, something that Black people don’t do. How do you feel about that?

DJ Fresh: That’s bullshit. After Qbert came out, it became big in the Filipino community but DJing has always been a big deal with the Black Community. People respect dope DJs.

M.O.I. JR: Can you tell us about your newest series of “street albums”? Who are the artists that you are working with?

DJ Fresh: I’m workin with D-LO a lot lately, and Sleepy D and I are workin on a Tonite Show and also an artist named Young Moses. I’m workin on a few other gems too but just doin a lot of stuff with the Pushin the Beat and Livewire camp.

M.O.I. JR: For those that don’t know, what is a “street album” versus a mixtape?

DJ Fresh: The original mixtape is a cassette tape with 60 minutes of time and you hit record play and you show ya skills live like doin a party, and if you messed up you started all over – dat’s the original mixtape. The 2k era mixtape is unoriginal material and songs like taking a Lil Wayne instrumental and redoing it along with others on a CD. An album is original material and that’s what we do; that’s what The Whole Shabang does.

A “Street Album” is also something that I don’t condone because it lessens the value. If people wanna treat it as that, then I won’t work with them because why should I put forth an album quality approach only to be dumbed down to a title like “street album”? What the fuck is that? I thought I could call it that but I can’t get with that neither, so get with it or get lost. “The Tonite Show” is an album series period, point blank.

M.O.I. JR: Being from Baltimore, what is your view of Bay Area hip hop and how it is selling?

DJ Fresh: I was born in B-More and my music roots is from the East Coast, but my heart is in the Bay just like everybody else. I think the state of music being sold is just in transition and I’m definitely in the front of what’s to come as far as seeing the fruits of our labor.

We have two projects right now in the Top 10 that myself and the Whole Shabang did all the beats for (J Stalin and Mayback, “The Real World Part 2” and “The Tonite Show” with D-LO) so the listeners are adjusting to the change and more will come. That’s my view.

M.O.I. JR: How did you meet Common and Nas and start DJing for them? Do you have any tours with Nas or Common coming up? Who else do you DJ for?

DJ Fresh: I met Common through my brother DJ Dummy when I was 16. I was already in the Bay but he always had shows at a place called Justice League in San Francisco back then, and I was doing part of the show with ‘em and then it became a regular thing.

Through my New York family I hooked up with Nas. I have a show with Common at this year’s Rock the Bells and I’m scheduled to do a summer jam tour with Amerie. I also have a debut album coming out called “The Tonite Show” album coming out on SMC/TownThizzness Label I’m excited about.

M.O.I. JR: How can people stay in contact with you?

DJ Fresh: Hit me on twitter, twitter.com/thetoniteshow. And even though myspace is dead, myspace.com/djfreshh.