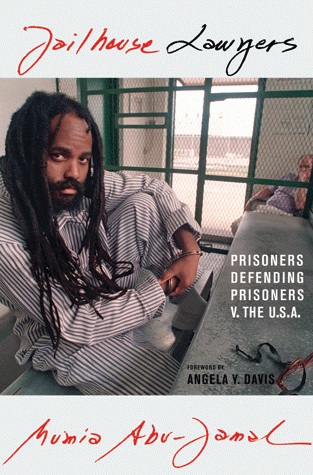 “Jailhouse Lawyers, we are learning, are often people of extraordinary firmness who fight for a law that rarely fights for them.” “Unity is feared … isolation is favored.” – from “Jailhouse Lawyers: Prisoners Defending Prisoners v. the U.S.A.” by politically condemned death row prisoner, journalist and former Black Panther Mumia Abu-Jamal

“This landmark legislation (Prison Litigation Reform Act) will help bring relief to a civil justice system overburdened by frivolous prisoner lawsuits. Jailhouse lawyers with nothing else to do are tying our courts in knots with an endless flood of frivolous litigation.” – Sen. Orrin Hatch, former chair of the Senate Judiciary Committee

On April 24, I had the honor of attending an event in Oakland honoring an extraordinary revolutionary writer, journalist, author and former Black Panther. It was his birthday. This event honored a man who needed no introduction to his peers and supporters, locally and globally: Mumia Abu-Jamal!

The event honored not only his birthday but his latest book, “Jailhouse Lawyers.” I attended with my Poor Magazine and Poor News Network family along with many other Mumia supporters. My Poor family purchased a copy of his book for Poor’s library, while I purchased a copy for myself.

Poor Magazine has launched the Revolutionary Legal Advocacy project that in many ways is a jailhouse lawyer project outside of jail, working to bring accessible justice to folks caught in the prison industrial complex and the non-profit industrial complex.

After we sang “Happy Birthday” to Mumia, a cake with candles was brought out for him. Tragically, Mumia wouldn’t be there to blow them out.

Since 1981, Mumia has been wrongfully incarcerated for his alleged killing of Philadelphia police officer Daniel Faulkner. Despite his innocence, a racist prosecution, jury and judge convicted him and sentenced him to death. What has kept him alive on death row is his voice, the voice of the people, and almighty God that refuses to let him die.

While we outside prison walls recommitted ourselves to fight for his freedom, we got to hear his voice. Over the speaker, Mumia expressed his love for everyone in attendance from inside prison walls.

In her foreword to “Jailhouse Lawyers,” Professor Angela Davis writes: “As Mumia has repeatedly pointed out, those of us who live in the ‘free world’ are not unaffected by the system of state violence that relies on imprisonment and capital punishment as pivotal strategies for ordering society. While those behind bars suffer the most direct effects of this system, its raced, gendered, and sexualized modes of violence bolster the institutions and ideologies that inform our lives on the outside.”

“The law, as we have seen, is an elusive thing. Yet how can we say what the law is without looking at the people who wear the title ‘judge’? Whether one wins or loses in the wheel of fortune that is law, a definitive factor is often the judge on the case,” writes Mumia in “Jailhouse Lawyers.”

“Jailhouse Lawyers” details how prisoners seldom received competent, effective or even adequate representation from lawyers in their criminal trials. Alternatively, they have to seek aid from inmates with self-acquired legal skills, relying on “jailhouse lawyers” or themselves to boldly challenge the U.S. “legal system” in spite of their incarceration and in spite of retaliation from prison officials for their efforts.

The court system is allegedly aimed to provide equal rights and justice for all. However, the only voices often heard in courtrooms are the beneficiaries of the judiciary, the wealthy class. “It is the will of one class made into a rule for all,” said Karl Marx, quoted in “Jailhouse Lawyers.”

Many jailhouse lawyers – some without even a high school diploma – are able to articulate facts and law to combat the corruption within the court system. Mumia chronicles numerous stories of those who faced incarceration or abuse while incarcerated but narrowly escaped through the power of the pen guided by self-invented legal minds, people unafraid to stand up to the injustices they face in prison.

Mumia deconstructs the corruption rooted in the contradictive, confusing force known as American law. Its callous vulture culture digs its claws into the working poor and the poor in general.

Mumia exposes the origins of these constructs from three men the U.S. proudly monumentalizes as its “founding fathers.” One was wealthy, another was a lawyer who despised the “common people” (the poor) and last but not least was another man who was wealthy, yet complex. Their names: George Washington, John Adams and Thomas Jefferson, the nation’s first three presidents, who stood in the forefront of America’s revolt against the British.

Mumia defines and explains the true goal of the Prison Litigation Reform Act: “Like a thief in the night, the Prison Reform Litigation Act was attached as a rider (usually a minor clause attached to a bill) to an omnibus appropriations bill, and signed into law without a committee markup (a report from the Senate Judiciary Committee explaining its provisions), drastically changing the law and legal procedure.” This law was “sneaked in” by former President Bill Clinton in 1996. It has had a destructive effect on the lives and liberties of millions of people.

Ironically, the roots of self-representation occurred during the American Revolution, when most English colonists despised lawyers. In 1776, over a decade before the introduction of the U.S Constitution, Pennsylvania’s “freemen” adopted a “Declaration of Rights.” The ninth article decrees, “In all prosecutions for criminal offenses, a man hath a right to be heard by himself and his counsel.”

But the crucial question from Mumia is, “What does it mean you hath a right to be heard, when no one wants to hear you?”

John Africa, founder of the revolutionary organization based in Philadelphia called MOVE, rejected representation by lawyers. On May 13, 1981, Africa and other MOVE members were arrested for allegedly committing terrorist acts by the means of bombs and explosives.

Over a month later during the trial, Africa had this to say to the court: “Bombs backfire on the people that create them and all those that believe in them, because bombs are explosive, destructive and corruptive. But wisdom is informing, and when you put what is right to a person, you ain’t in danger of getting wrong back! That is the difference between what I use as my defense (my bomb) and what the government uses as their so-called defense: their bomb.”

This among his many arguments led to the freedom of John Africa and a few others from MOVE who were facing trumped up charges that would’ve led to a decade of federal prison time.

In a tragically ironic, twisted chain of events, Africa and 11 other MOVE members were brutally murdered on May 13, 1985, by the very terroristic means that he had been charged with four years earlier! Philadelphia police illegally obtained explosives, including C-4, from federal law enforcement that killed the MOVE members, who included women and children.

“Jailhouse Lawyers” talks about the overcrowding of incarcerated women. Central California Women’s Facility in Chowchilla, California, alongside Valley State Prison for Women, is the largest prison complex in the world. “And it is overcrowded,” writes Mumia.

“With the growing imprisonment of women comes the need for more jailhouse lawyers to assist them,” says jailhouse lawyer David Resendez Ruiz. Ruiz helped reform the entire prison system beginning in 1971 with a 30-page complaint and a courageous heart. Despite retaliation against him by prison officials, he exposed the plantation-equivalent corrupt prisons in the state of Texas.

Mumia’s book not only talks about self-representation on the inside, but on the outside as well. In Chapter 4, titled “What about Street Lawyers?” he talks about a lawyer by the name of Clarence Darrow, who, in his 1902 speech, “Address to the Prisoners in Cook County Jail,” stirred up a wave of self-empowerment for the many in attendance.

Darrow’s colleagues, although in agreement with his speech, criticized him for speaking to “those people” – prisoners.

As I concluded reading “Jailhouse Lawyers,” I realized in some metaphorical way I personally identified with Mumia. As my mentor, Lisa “Tiny” Gray-Garcia, and my family at POOR often refer to me as a “revolutionary legal scholar” and a “lawyer without a degree,” I often think back to the terrible past events that earned me those titles.

Though I’ve never been arrested or incarcerated a day in my young life, a dozen members of the San Francisco Police Department nearly put an end to that accomplishment, as well as an end to my very life. Recalling the night those police officers illegally stormed my hotel room unannounced in a “mistaken identity” scenario with their guns ready to open fire, many what if’s come to my mind.

What if I’d had a gun for protection purposes and mistook them for burglars? I could’ve shot and killed one or more of those officers, and they surely would’ve killed me. Even worse, what if by the grace of almighty God’s hand I’d survived that barrage of bullets? Who would’ve believed me innocent, that I was defending myself and my property?

Those of you who read this know the answer. I would surely be in the same political predicament as Mumia Abu-Jamal himself. In the process of my unsuccessful civil suit against the City and County of San Francisco, representing myself, I learned how the law and the legal system really work.

At the end of the book in the appendix section, handwritten petitions and other documents by jailhouse lawyers themselves inspired me. They show the tenacity and willpower of people so determined to win justice, they do everything themselves. Will vs. skill. Having crafted legal pleading papers, cited proper legal authorities and complied with the filing processes, I can second their sentiments.

Reading “Jailhouse Lawyers” proved to me the remarkable ability of self-representation and self-empowerment by those who seek justice, un-misguided by a fraudulent lawyer.

Mumia concludes his book with these words: “Men and women, often self-taught, have developed a tradition of selfless service and in some cases excellence, to serve the needs of society’s dispossessed.

“To be one of that number has been a challenge and an honor to this writer, who offers this reportage to illustrate what transpires in the depths of America, the Prisonhouse of Nations.”

Marlon Crump writes for Poor News Network and Poor Magazine. Read more about issues of poverty and race written by the people who face them daily at www.poormagazine.org.