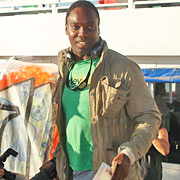 Black British filmmaker Ishmahil Blagrove has launched an outspoken attack against the “racist” Israeli government after being abducted from the high seas and imprisoned for seven days.

Jamaica-born Blagrove, who lives in West London, was one of six British nationals taking part in a mercy mission to Gaza on who were seized from the vessel Spirit of Humanity on June 30 by Israeli military forces.

The ship, which Blagrove says was illegally boarded in international waters, was bringing a cargo of medicines, children’s toys and reconstruction materials to the devastated people of Gaza.

“I’m not concerned with the time that I spent in jail because I am now free; however, there are still thousands of people being persecuted as we speak,” said Blagrove.

“I went on the voyage to deliver medical aid and toys and film a documentary about Palestinians living in Gaza post the 22-day bombing last year; however, I was unable to fulfill my mission and have now returned with a bigger story to tell. Africans, like Palestinians, are being persecuted by the Israeli government and the world needs to know.”

Sailing from Larnaca, Cyprus, with a crew of 21 human rights activists and humanitarian workers and journalists from 11 different countries, those on board included Nobel Peace Laureate Mairead Maguire and former U.S. Congresswoman Cynthia McKinney.

Blagrove told how Israeli warships surrounded their vessel threatening to open fire if they did not turn back.

“We were 18 miles off the coast of Gaza and 23 miles outside the international waters boundaries. The Israelis made contact with us via radio at approximately 1:30 a.m. Our ship had been given security clearance by the port authorities in Cyprus so we posed no threat, yet the Israeli government insisted that we aborted our journey.

“When we refused to be intimidated, they jammed our instrumentation and blocked our GPS, radar and navigation systems, putting our lives at risk.

“Before we knew it, we were surrounded by four Zodiac Special Forces, which are Israeli gunships, and helicopters were also flying over our heads. They stormed our ship and took us against our will to Ashdod Port in Israel.

“They confiscated and destroyed all our equipment, including all our medical aid and toys, and eventually we were all taken to Ramle High Security Prison where we were imprisoned.”

Describing his experience inside Ramle, Blagrove said: “Without insulting the memory of those that have survived the Nazi concentration camps, the prison we were kept in can only be described in that manner. But, most astonishingly, the prison was full of Black Africans. I was absolutely dumbfounded!

“Israel operates under a right-wing racist government that discriminates against anyone that is non-Jewish.

“The first day I was there, I witnessed 500 Africans, scooped from the streets of Tel Aviv, thrown into prison. The next day 300 more Africans were taken in and the prison population continues to grow daily with Africans falling victim to the Israeli judiciary system.

“There were Africans from the Ivory Coast, Ghana, Eritrea and so on. The prison population in Israel is 90 percent Black, which is why I was so welcomed by fellow inmates. There are thousands upon thousands of Africans inside the Israeli prisons.

“I was told atrocious stories. Real harrowing tales and countless inmates that have been transferred from one prison to the other informed me and that every prison is the same and the government is refusing to send them back to their own country.”

Haunted by the conditions of the prison, he said: “I shared a 7-foot by 7-foot cell with 14 others. We were constantly being barked at and threatened with physical abuse. If you disobey, prisoners are stripped naked and put inside a hole with no lights or heating. We were seen as sub-human.

“In the corner of the room there was a white plastic bag full of single slices of bread, which was our breakfast, lunch and dinner. If we were lucky, they occasional gave us a cup of yoghurt to share.

“The toilets are two tubes and to pass your waste you have to aim and squat. The smell was indescribable because it was a mixture of sweat, urine and feces.”

Explaining that the government officials tried to force him to sign documents in Hebrew, which is illegal, as all prisoners must be able to understand what they are consenting to, Blagrove said: “My fellow passengers and I were only kept for seven days because they knew the world was watching.”

Quoting Martin Luther King, Blagrove stated: “An injustice anywhere is a threat to justice everywhere. I want people to realize that social injustice is an international struggle and one man’s suffering in any region around the world cannot be ignored by others.”

The filmmaker, who is currently make a documentary about African roots in Cuba, added: “The Israeli government has been very clever in stopping the truth being told about their regime, because whenever anybody speaks out they are instantly labeled anti-Semitic and anti-Jewish.

“I challenge anybody to go and investigate the crimes against humanity inside Israeli prisons and the people of Gaza.

“I am disturbed that the mainstream British media, and in particular the BBC, has chosen to ignore what is taking place in Israel.

“If we had been kidnapped by Iranians, it would have been front page on every newspaper and David Milliband would have made a public statement, including Gordon Brown and Barack Obama.

“There is a conspiracy of silence to protect Israel from the crimes it commits. The biggest lie ever told is that Israel is defending themselves from Palestinians who are trying to kill them. Until people broaden their minds and really unearth the truth this problem will not go away.”

This story originally appeared in The Voice.