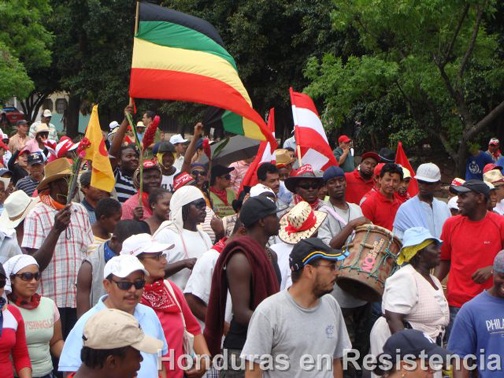 Currently, the country of Honduras in Central America is experiencing its worst political crisis in decades. In the aftermath of the military coup that forcibly removed President Manuel Zelaya Rosales, there have been various developments that have raised our concern about the security of citizens’rights and the impact of the situation on people of African descent.

The day after the military coup, Enrique Ortez Colindres was appointed foreign minister by the de facto authorities, replacing exiled minister Patricia Rodas. Since then, Ortez Colindres has made a series of degrading statements about U.S. President Barack Obama and Afro-descendants in general, including repeatedly using the term “negrito” and “negrito del batey” which translate into “little Black boy” and “little Black sugar plantation worker,” respectively. The term “negrito” is a universally degrading and racist term used to refer to people of African descent in Latin America and synonymous with the English equivalent “nigger.”

These recent remarks elicited public outrage from the U.S. ambassador to Honduras, Hugo Llorens, and Ortez Colindres recently resigned his post. Comments such as these have no place in our societies today and should elicit swift outrage and action well before they travel beyond domestic borders.

The Afro-Honduran NGO ODECO (Organization of Ethnic Community Development), a member of ONECA (Central American Black Organization), has submitted a formal complaint against Ortez Colindres to Attorney General Luis Alberto Rubí Ávila, reminding the state that his comments are contrary to their country’s anti-discrimination laws and policies.

ODECO President Celeo Alvarez Casildo writes in the complaint: “The unfortunate and disrespectful statements made by ‘Chancellor’Ortez Colindres are a real insult to humanity, especially to the Afro-descendant people he is calling ‘negritos.’ If the ‘chancellor’ dares to call the president of the first world power a ‘negrito,’ what treatment should be expected for the poor, Afro-Honduran on the ground? 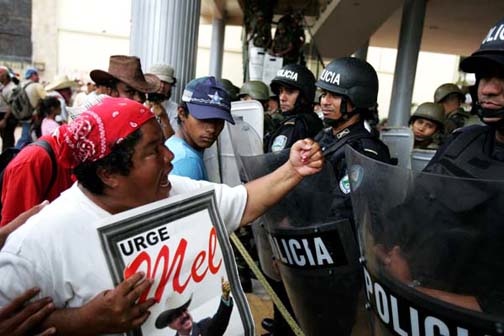 “As you know,” the complaint continues, “the scourge of racism and discrimination has no territorial, ethnic, racial or religious boundaries. It is a flagrant violation of the Constitution of the Republic, which, in Article 60, guarantees equal rights before the law and prohibits privileged classes and all forms of discrimination.

“The crime of racism and racial discrimination is punishable under Penal Code Article 321, which states the following: ‘They will be punished with three to five years of imprisonment and a fine of 30 thousand to 50 thousand lempiras, those who discriminate against another person because of sex, race, age, class, religion or political party, including adolescents with disabilities and any other harm caused against human dignity. If the person responsible is a foreigner, he will be deported from the country once the sentence is complete.’”

We have also been informed that the life of Dr. Luther Castillo, an Afro-Honduran Garifuna physician in Honduras, is in imminent danger and that the Honduran army has orders to capture Dr. Castillo and, if he resists, to shoot him. Dr. Castillo had been reporting on continued demonstrations demanding the return of elected President Manuel Zelaya, despite security forces’ repression.

Since 1999, he has directed the Luaga Hatuadi Waduheñu Foundation (“For the Health of our People” in Garifuna), dedicated to bringing vital health services to isolated indigenous coastal communities. Castillo is included on a list of persons whose lives and personal integrity were declared “at risk” after the military coup by the OAS Inter-American Commission on Human Rights.

Afro-Honduran organizations are also concerned about the potentially negative impact that this unfortunate political situation will have on the wellbeing of their communities, not only with regards to the basic human rights and physical integrity of leaders like Dr. Castillo, but also with regards to the rights to their ancestral lands, political participation and access to employment. 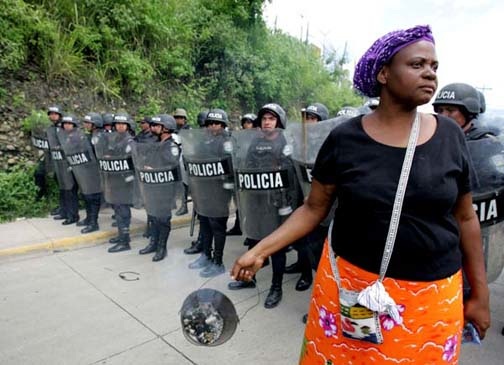 The Afro-Honduran community is one of the most vulnerable communities in the region, and it is likely to be disproportionately affected by the consequences of this situation. An assembly of Afro-Honduran organizations is currently taking place in La Ceiba, Honduras. The assembly will produce a declaration analyzing the impact of the situation and the path forward to deal with the aftermath.

We are aware that, as a result of Congressional concerns for the Human Rights situation in Honduras, the curfews were lifted over the weekend of July 11-12. It is critical, however, that the United States work with our neighbors and the global community to support the citizens of Honduras in their demand that President Manuel Zelaya be restored immediately to his constitutionally elected post and authority as president of Honduras. Democratic rule and civil liberties must be restored.

In a statement titled “We Condemn the Honduran Coup,” ODECO writes: “We strongly condemn the coup against the government of the Republic, making use of the armed forces to achieve these purposes, which today keep Honduras as a ‘semblance of a republic’ in front of the international community. This non-diplomatic process prioritizes the interests of the oligarchy petrified in power and calls into question the guarantees of the operation of a real participatory and inclusive democracy, where very few can actually aspire to their greatest desires of collective wellbeing and prosperity, giving priority to respect for laws and for human beings as the solid foundations to transform the deplorable conditions in which the immense majority of the excluded and impoverished in the country find themselves.”

TransAfrica Forum is the leading U.S. advocacy organization for Africa and the African Diaspora in U.S. foreign policy. TransAfrica Forum helped lead the world protest against apartheid in South Africa and today works for human and economic justice for African people on the continent of Africa, in Latin America and in the Caribbean. For more information, visit www.transafricaforum.org. English translation for this story was provided by TransAfrica Forum.

‘There is no turning back’: We salute a great freedom fighter – Comandante Hugo Chavez Frias