by Time for change 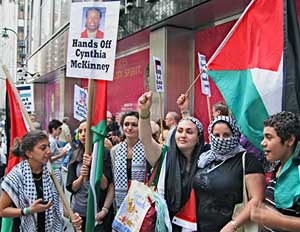 Our country desperately needs politicians like Cynthia McKinney – those who speak truth to power. Her words and actions mark her out as a prime target for those whose main interest is in maintaining the status quo.

It makes me sad and angry to hear Cynthia McKinney accused of bigotry. It’s bad enough to hear right wingers do that – that’s to be expected. But to hear charges like that spread on progressive websites is depressing.

During her 12 year congressional career, Cynthia McKinney was one of our most progressive members of Congress. In these times when so many Democratic members of Congress have disappointed us so much by their failure to stand up for liberal and progressive causes, I am especially appreciative of a congresswoman who has been consistently unafraid to stand up for what she believes in.

Because of her outspokenness on some key issues, there are few if any members of Congress who have been as feared and hated by the powerful as Cynthia McKinney. “The forces working against Cynthia McKinney,” by Dianne Mathiowetz, published Aug. 16, 2006, by Workers World, sums up many of the reasons for that:

“First elected to Congress in 1992, McKinney was an outspoken opponent of the Bush administration’s policies on issues ranging from the war on Iraq to cutbacks in social programs.

“She took on the blatant disenfranchisement of Black voters in the Florida election in 2000. She held a hearing that determined that Florida state officials knowingly used faulty data to remove tens of thousands of registered voters from the precinct lists for being convicted felons.

“McKinney helped expose the horrific conditions of Katrina evacuees. She castigated the Patriot Act and compared it to the FBI’s Cointel program that targeted Dr. Martin Luther King, the Black Panther Party and other freedom fighters during the 1960s. She stood up for African nations to get favorable trade agreements and loans to improve their economies.

“The right-wing focused on a lengthy radio interview she did in 2001, where she commented on the Bush administration’s objections to there being an official investigation into 9/11. She stated that the public had the right to know what the administration and the various governmental agencies knew about any impending threats and when they knew. In this period prior to the onset of the war on Iraq, any and all criticism of the Bush administration was treated as heresy. McKinney was pilloried in the press, called a ‘wacko’ and worse.”

As a result of McKinney’s many high profile words and actions, her primary opponent in her 2002 bid for re-election to Georgia’s 4th District House seat “was massively assisted by a national media campaign of slander against McKinney.” She won her seat back in 2004, but in 2006 her seat was targeted again, thus ending her Congressional career apparently, as she was the only Congressional Democrat to lose her seat that year. It’s a shame that some on the left have bought into the right wing slander against her.

A few words about anti-Semitism

Derogatory comments against Israel are NOT anti-Semitic – any more than the criticism of any government is an indication of bigotry. For example, I have posted numerous criticisms of my own government, and yet I don’t believe that that makes me anti-American or unpatriotic. By the same token, voicing concerns about or criticizing those who lobby  on behalf of Israel in the United States is not anti-Semitic.

Then there is a gray area with respect to Zionism. Zionism was originally defined, beginning in 1897, as a political movement aimed at establishing a unique homeland for the Jewish people. Zionism was motivated by the fact that Jews throughout many parts of the world had suffered through many centuries of severe discrimination.

Following the Nazi Holocaust, Zionism became much more popular, for obvious reasons. Being against Zionism was not necessarily a sign of anti-Semitism. There were many Jews at the time who were not Zionists or who were against Zionism – for many different reasons. Nor was it necessarily considered an insult to be called a Zionist.

Today, however, there are many people who use the word Zionist to denote something akin to Jewish imperialism. Is that anti-Semitic? The way some people use that word, it seems like a back-door means of expressing their anti-Semitism. But in order to know whether use of that term is an indication of anti-Semitism, one would have to consider the context in which it is used, and/or make assumptions about a person’s motives in using it. That’s why I say it’s a gray area. It may be that most people who use that word today use it with anti-Semitic intentions. I don’t want to argue about that here. It is usually best not to use that word unless one makes it clear how it is being used and that it is not meant as a slur against Jews.

On the claim that Cynthia McKinney is anti-Semitic or bigoted

For example, I recently listened to a radio interview in which McKinney was accused of exhibiting anti-Semitic views. Though the interviewer made several statements that could have been construed as anti-Semitic, McKinney did nothing to facilitate that. She never used the word Jew or Zionist. She did harshly criticize the Israeli government, primarily for its obstruction of a humanitarian mission to Gaza in which she was involved in December 2008.

She said that the boat she was on was surrounded by Israeli warships that purposely and with violent intentions rammed her boat, the Dignity, threatened her and her fellow passengers, and prevented the boat from completing its humanitarian mission. She accused the Israeli government of lying about the episode in several respects.

Only once during the interview did McKinney mention the Jewish people – actually she said “the people of Israel” – as opposed to the Israeli government. That was when she said something to the effect that she believes or hopes to believe that the vast majority of the people of Israel are peace loving people who want to live in peace with their neighbors. She made it clear that her complaints were with the Israeli government, not its people.

And what about the complaint that McKinney shouldn’t give interviews with interviewers like that, or that she should have argued with him when he made statements that could have been construed as anti-Semitic?

First of all, progressives are often interviewed by FOX News or other bigoted or corporate news organizations. Wesley Clark was even a commentator for FOX News. How many liberals have appeared on news shows with Pat Buchanan or other like-minded talking heads, for example? Do we accuse them of being bigots because of that?

Is there not a double standard operating here?

Secondly, McKinney granted this particular interview because she wanted to register a public complaint against the actions of the Israeli government – an ally of her own country – and draw attention to the humanitarian crisis in Gaza. Would “respectable” news organizations in the United States have granted her such an interview? Not likely. She had a point to make, and she used that particular forum to make it. She didn’t wish to dilute her message by getting involved in a discussion about whether or not her interviewer had anti-Semitic intentions with regard to his remarks about Zionists. But she did not publicly agree with any remotely anti-Semitic sentiments that may have been implied during the interview.

The most important reason for right wing hatred of Cynthia McKinney

“I’m most proud of my work to hold this administration accountable to the American people,” she said. “And after I’ve asked the tough questions, here’s what we now know:

“That President Bush was warned that terrorists were planning to hijack commercial aircraft and crash them into buildings in the U.S.” (She then lists much more evidence of pre-knowledge of the event.) …

“All of this has become public knowledge since I asked the simple question: What did the Bush administration know and when did it know it?

“Now against this backdrop of so many unanswered questions, President Bush wants us to pledge our blind support to him. First, for his war on terrorism and now for his war in Iraq. How can we, in good conscience, prepare to send our young men and women back to Iraq to fight yet another war …?”

The far right and corporate interests in the United States have developed a powerful, insidious and effective echo chamber for destroying those who pose a threat to them. Let’s not forget the way that they repeatedly lied about Al Gore during the 2000 election campaign; how the zillions of repetitions of the “Dean scream” destroyed Howard Dean’s presidential candidacy in 2004; the swiftboating of John Kerry in 2004; or the Harry and Louise ads that derailed a national health care plan during the Clinton administration. In large part, these efforts and many more were successful because they were able to convince some moderates and even progressives to buy into their pile of lies and exaggerations.

Cynthia McKinney has some issues with the nation of Israel, in particular with their alliance with militant neoconservatives in the United States. She has not hesitated to voice her opinions on these issues. Her enemies, especially those with an interest in propagating war in the Middle East, have used this to paint her as anti-Semitic or bigoted, and too many people have bought into that myth.

As a matter of fact, the same people did the same thing to former President Jimmy Carter with respect to his book, “Peace, Not Apartheid.” But this is NOT a “Jewish” issue. American Jews in general are far to the left of the state of Israel and those Jews who lobby on behalf of Israel in the United States. In 2008, Jews voted Democratic – 78% – more than any other religious group, including “none” and “other.” I feel certain that if my parents were alive today that they would have similar criticisms of Israel to those that McKinney has.

McKinney’s courageous stands have gotten her into great trouble with the far right and the powers that be on many occasions: her steadfast anti-war stance; her efforts on behalf of the victims of Hurricane Katrina; her questioning of our government’s account of the events of 9/11; her introduction of impeachment resolutions against George W. Bush on the floor of the U.S. House of Representatives; her participation with the Free Gaza movement in helping to provide  humanitarian relief to the people of Gaza; and most recently, her refusal to sign an Israeli document that would have allowed her to be released from an Israeli jail in return for admitting guilt for violating an Israeli blockade in connection with her humanitarian mission.

Our country desperately needs politicians like Cynthia McKinney – politicians who will not shrink from protecting the vulnerable or criticizing the powerful. Her words and actions mean a great deal to us in an era when so few public officials are willing to speak the truth about grave abuses of power by high government officials.

Those same words and actions mark her out as a prime target for those whose main interest is in maintaining the status quo. Consequently, her words and actions are constantly twisted, exaggerated, and misinterpreted with the intent of marginalizing, vilifying and demonizing her. Let’s hope that those who do that don’t continue to get away with it.

Time for change is a regular contributor to DemocraticUnderground.com,  which can be reached at mail@democraticunderground.com.