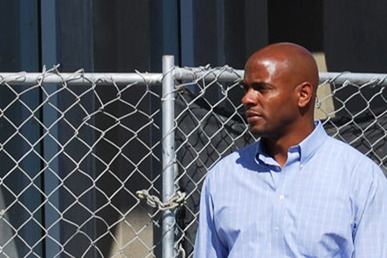 It’s been 33 years, but Ed Donaldson can still see the anxious look on his mother’s face when she was told she had to move. It was 1976, and Donaldson was only 10 – the youngest of three children – when the family received word from the San Francisco Redevelopment Agency that they were being kicked out of their Hunters Point apartment.

Donaldson’s mother decided to use the opportunity to purchase a home – no easy feat for a single Black woman in the 1970s. After months of racist- and sexist-tinged questioning by loan officials (was she having more children? where was her husband?), she secured a loan for a house she still lives in today.

“We landed on our feet, but so many other families didn’t,” remembered Donaldson, now 43 and the housing counseling director at the San Francisco Housing Development Corp.,  an organization focused on finding affordable homes in San Francisco for people of color, particularly Blacks.

As in other cities across the country, San Francisco’s Black communities became the focus of massive urban renewal programs spanning from the late 1940s through the 1970s. In the city’s predominantly Black Fillmore district, a total of 4,729 businesses, 2,500 households and 883 Victorian homes were demolished to make room for government-owned housing and commercial businesses.

Some displaced residents moved to other parts of San Francisco, while others relocated to more affordable cities like Oakland and East Palo Alto. In total, more than 5,000 families were displaced.

Ironically, since the end of the urban renewal programs in the ‘70s, San Francisco city officials have commissioned several studies investigating why Black residents are leaving and how to get them back. Recommendations in the past have included training young Black entrepreneurs and establishing a Black tourist district like Chinatown.

“In (San Francisco’s) predominantly Black Fillmore district, a total of 4,729 businesses, 2,500 households and 883 Victorian homes were demolished to make room for government-owned housing and commercial businesses. … In total, more than 5,000 families were displaced.”

Yet the hemorrhaging has continued.

Since the last report in 1990, San Francisco’s Black population has dropped by 40 percent, faster than any other major city in the country. According to the latest Census data, Black residents make up only 6.9 percent of the city’s current population and are projected to make up as little as 4.6 percent in 2050.

The latest government effort to reverse this loss is the African American Out-Migration Task force started by Mayor Gavin Newsom and Supervisor Sophie Maxwell in 2007.

The task force has 18 members – mostly clergy, researchers and city officials – and was supposed to investigate what was driving Black residents out of the city. They were also to come up with a set of comprehensive policy recommendations to bring them back.

Yet after nearly two years of work, the recommendations remain unpublished.

Aileen Hernandez, chair of the task force, is critical of what she described as a lack of institutional support from city officials, including not providing a paid staff. After months of debating policy recommendations and without any internal accountability, the taskforce produced a draft of the report that has languished on the desks of various city departments, according to Hernandez.

An informal committee of the mayor’s paid staff is revising the report to include the city’s existing efforts to retain Black residents, Hernandez said. She expected that the taskforce would review the latest draft and, if approved, would release the report by the end of this month.

“My hope is that we would get to the point where what we would be focusing on is doing and not just writing reports,” said Hernandez, who declined to disclose the recommendations.

But some task force members are concerned that the mayor will want final recommendations closely aligned with his already controversial housing agenda.

Last year both Mayor Newsom and Supervisor Maxwell endorsed Proposition G, a controversial housing measure that allows Florida-based developer Lennar Corp. to develop 10,000 new homes in Bayview Hunters Point. The measure, which ultimately passed, was hotly debated because Bayview is a historically Black San Francisco neighborhood. It grew from fewer than 20,000 residents in 1940 to almost 150,000 by 1950 – the vast majority of whom were Black migrants from the South who came to work in the Hunters Point Naval Shipyard, along with many Black veterans returning from war. At the time, Black residents were prevented from living in other parts of the city by both legal and illegal policies and practices.

Regina Davis, president and CEO of the San Francisco Housing Development Corp., pointed to research collected by San Francisco State University professor Shawn Ginwright showing that 50 percent of Black residents who have left San Francisco since 1990 have moved to Oakland.

Davis thinks those residents are more likely to return if more is done to publicize what the city is doing, such as the $100,000 in down payment assistance offered for first-time homebuyers through the Mayor’s Office of Housing. This measure was highlighted in a draft version of the report as a potential way to bring middle class Black residents back.

But in a city where it takes an estimated $77,000 for a family of four to survive, housing is just one issue driving and keeping Black residents out of the city.

Tinisch Hollins, a member of the task force, said that the real intent should be to transition the city’s current population to homeownership instead of emphasizing sub-standard public housing, and argues that assistance with down payments isn’t enough in a city where an average home costs close to $1 million.

Moreover, she said the issue is much larger than housing.

“The real way to attract Black residents to San Francisco is to retain and strengthen the existing community,” said Hollins, adding that she didn’t think there was enough emphasis on addressing educational and health disparities in the city’s Black community.

“‘Out-migration’ is this broad, neutral term that assumes that Black people are leaving of their own free will and have found greener pastures,” said Alicia Garza, co-director of People Organized to Win Employment Rights, a multiracial non-profit that works on housing and wage rights in San Francisco. “Some of that is true, but what it doesn’t do is take a critical look at … what San Francisco is doing that’s causing that hemorrhaging.”

Preliminary research by the task force showed that one key reason Black residents have continued leaving is “cultural safety,” meaning the level of racial hostility targeted toward Black communities.

That same research showed that some former residents said they felt alienated by what they see as the city’s erasure of Black history. The city’s Fillmore district, for instance, is now promoted as a jazz district, but with no direct mention that it was a historically Black neighborhood.

Many younger Black residents feel that any institutional change must be community-led.

And that change in leadership may be in the Osiris Coalition, a collective of mostly young, Black leaders and five community-based organizations. Donaldson was a founding member in 2007.

The first piece of legislation the coalition tackled was the city’s long-dormant Certificate of Preference program.

Established in 1967, the program was supposed to benefit residents like Donaldson’s family – people who were displaced by urban renewal. But for years, the program was plagued by inefficiency and mismanagement. It required that families provide paperwork to prove they had lived in areas that were demolished.

“When you tell a person that you have to go find records from 40 years ago, that’s not acceptable,” said Donaldson.

In its first two years, the coalition has been successful in pushing several reforms to the program, including getting the city to hire two staff members who work directly with residents applying for certificates and to institute an online database and registration form. About 6,500 certificates have been issued since the program’s inception, and a little over 1,000 have been exercised.

Numbers on exactly how many residents have benefited from the changes were not immediately available, but Donaldson hopes a more efficient process will entice greater numbers of people to apply.

An estimated 96,000 people are projected to be eligible for certificates.

In many ways, the Osiris Coalition stands as a challenge to an older generation of Black leadership that was either complicit in or ineffective to Black residents being pushed out of the city, according to Donaldson. And while he took issue with the fact that the program places the burden to return on displaced families, he also said that the work itself has given the Osiris Coalition the credibility it needs to be taken seriously.

“What we’re saying is that those old folks who are there, who are comfortable with doing things how they’ve done in the past, we’re not standing for it,” he said.

Jamilah King is a writer based in San Francisco and associate editor of Wiretap Magazine. She can be reached at Jamilah@wiretapmag.org. This story first appeared Aug. 12 in ColorLines.