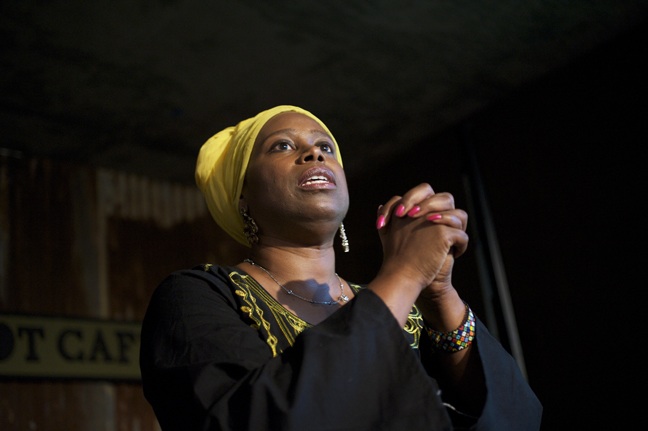 On the first night of her Aug. 20-24 Triumph Tour, our sister Cynthia McKinney put a face on Gaza, Palestine, I don’t think many in the audience had seen before – I’m speaking of African Americans who are not usually the target population of such media focus. McKinney was speaking at Oakland’s landmark Grand Lake Theater, kicking off her Gaza Solidarity Triumph Tour, a series of fundraisers for the struggling SF Bay View newspaper.

The link between Palestine and the African Diaspora is clear, yet until the Honorable Ms. McKinney bought a video camera and took it with her to Gaza – where first she was apprehended by the Israelis and thrown in prison – the plight of these folks was “over there” … a disconnect she remedied so well.

McKinney’s tour began on the first anniversary of the day, Aug. 20, 2008, that another one of our sisters, Nadra Foster, was beaten by Berkeley police when KPFA staff called them to escort her from the station. The charge was trespassing, when Nadra had been working at KPFA for a dozen years. She was restrained after suffering multiple injuries. Today, her hand remains paralyzed.

We must not forget this legacy of police violence as another KPFA programmer, The POCC Minister of Information JR Valrey, appeared in court that morning on a felony he was accused of in the Jan. 7, 2009, Oscar Grant Protest March in downtown Oakland. Cynthia McKinney went to court to support him and shared her impressions on Flashpoints on KPFA that afternoon.

On the Grand Lake Theater’s big screen, the audience watched McKinney’s footage of houses and schools bombed and bulldozed during Israel’s vicious air and ground attack on Gaza last winter. McKinney pulled out her souvenirs – a child’s writing tablet, a can of peanuts Israeli soldiers had snacked on during their demolition mission and other everyday objects – stark examples of the craziness propelling this concerted effort to exterminate a people.

In Cairo, while negotiating for permission to cross the border, she had interviewed a member of the Viva Palestina team she had joined a few days after her release from prison that was trying to take a convoy loaded with humanitarian aid into Gaza. He told her how the Israeli government makes the volunteers wait at checkpoints and then refuses to allow chocolate into the West Bank. He called the policies “evil.” I agree and would add, mean spirited.

Finally granted permission to enter Gaza for a mere 24 hours and deliver some of their humanitarian aid, McKinney and her camera rolled along the road past demolished apartments and other buildings. A building leaning precariously next to a functional one was common … as were people walking along or driving, taking care of their everyday business.

McKinney said that the Israeli interruptions did not stop the resistance nor the Palestinian commitment to moving forward with their lives. She described the society and its government as well-organized and efficient.

The war topography reminded me in the landscape in Kingston, parts of East and West Oakland, North Richmond and the Lower Ninth Ward in New Orleans. We are so close to the battlefronts … borders philosophically connected. Funny the imperialists divided Africa and the rest of the world, and their exploitation is knitting it back together.

McKinney said about her kidnapping and imprisonment, “Prior to this trip, I’d never been in prison before.” Seated on the Grand Lake stage in conversation with Flashpoints host Dennis Bernstein and with Kathy Sheetz, a nurse and filmmaker who was also one of the Free Gaza 21 imprisoned in Israel, McKinney told of meeting many people in the prison who had come to Israel from Africa – Sudan, Ivory Coast, Ethiopia and many other countries.

I learned in my interview with the director of the film “Refugees,” which was shown at the recent San Francisco Jewish Film Festival, that the Israeli government has a punitive policy of incarcerating entire families for as long as five or six years, then sends them back to their country of origin to often dire consequence. The Egyptian government supports Israel’s policies and kills many immigrants – point blank – as they cross or attempt to cross the border.

McKinney, who tried twice in six months to break the blockade and carry aid to Gaza by sea to avoid the Egyptian border, was attacked both times by the Israeli Navy. In December, the Free Gaza boat Dignity with McKinney, a former U.S. Congress member, aboard, was rammed and nearly sunk. She said as she believed her life could end in that moment, a strange calm came over her and from that moment forward, she has not feared for her life.

In June, when she was aboard the Free Gaza boat Spirit of Humanity, the Israeli warships stirred the water and almost capsized the boat, then boarded it and took all 21 people aboard into custody. She joked with Sheetz that every time she joins the Free Gaza movement to take humanitarian aid to Palestine, something untoward happens.

Now that they are released, the two women are banned from Israel for 10 years. The reason they were held a week in prison was the government wanted them to confess to entering Israel illegally, but McKinney and Sheetz held firm to the fact that their boat had never entered Israeli waters and their arrest amounted to kidnapping.

It was a wonderful evening, replete with presentations by independent candidates for the KPFA local station board, along with poetry and updates on the Oscar Grant Movement, on Haiti and on Nadra Foster’s case. Cynthia McKinney is a great speaker and an exemplary model of fearlessness and commitment to justice and peace. I hope she gets the position as head of the Pacifica radio network.