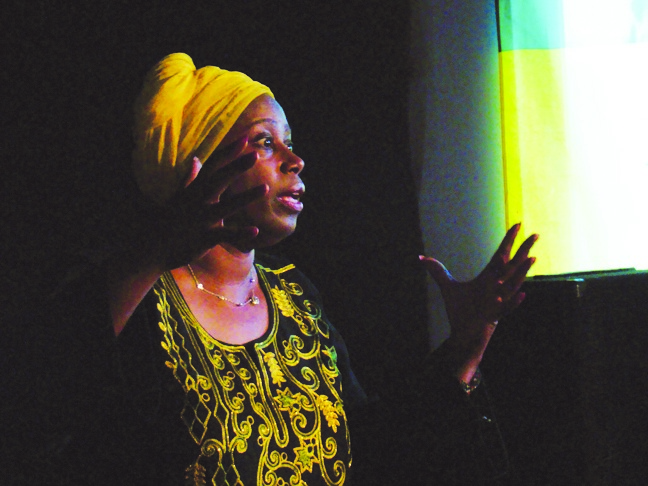 Cynthia McKinney, former U.S. congresswoman and member of the Free Gaza movement, gave a talk at the San Francisco Lunacy Theater on Sunday, Aug. 23. The event was a benefit for the San Francisco Bay View newspaper, an independent monthly that covers a variety of local and international stories. Her speaking tour follows her recent expedition on a Free Gaza boat attempting to break the siege of Gaza by sea and on a Viva Palestina caravan from Egypt that succeeded in delivering some of its cargo of humanitarian aid to Gaza.

“Gaza lives,” McKinney said. “The people are vibrant and alive despite F-16 bombings, deformed children, depleted uranium. I didn’t think about what could happen to me before going. I’ve been involved in life threatening political activity for some time, so when I got the call, I didn’t think about my safety.

“Operation Cast Lead (the 23-day attack on Gaza by Israel last December and January) sickened me. I just went, and I’m so happy I did, even when my boat was rammed and I was kidnapped by the Israelis,” she declared. It was on her first attempt with the Free Gaza movement to reach Gaza last December when her boat was rammed. And it was on her second trip with Free Gaza in June that everyone aboard was kidnapped at sea and imprisoned.

“They took us to Israel,” McKinney continued, “and then charged us with illegal entry! I spent seven days in prison with Ethiopian immigrants facing similar charges. Meanwhile, the Congress and White House said nothing.”

About a week later, with Viva Palestina, “we had a caravan of $500,000 worth of trucks, cars, medical supplies for Gaza, but Egypt denied entry. They’re still sitting in Egypt right now.”

She spoke of the “Two Americas” – one inhabited by the wealthy elite and the other by the impoverished majority – and urged Americans to cultivate a stronger resistance movement in order to respond to political corruption and election fraud. She cited the Haitian uprising against the kidnapping of democratically elected President Jean-Bertrand Aristide as well as the social unrest in Mexico City following 2006 election as model examples of mobilization for the U.S.

She applauded local organizers for their response to the police murder of Oscar Grant, and credited the demonstrations following his death as largely responsible for the prosecution of his killer, Officer Johannes Mehserle.

She spoke of violence in the Congo that has left nearly 6 million dead in its brutal wake. The CIA deserves special condemnation, as they orchestrated the assassination of President Patrice Lumumba which plunged the nation into 37 years of political turmoil.

“During my time in Congress my office was an information clearinghouse for the dispossessed of the world. I had people coming from all over the world to tell me of their people’s suffering.”

During her time in Congress, she convened a panel hearing “The Role of Race and Class” in Hurricane Katrina. Survivors of the hurricane’s aftermath were invited to Washington to tell their stories of the Katrina cough, abandoned bioweapons facilities, inhumane treatment of prisoners and other issues for the congressional record. Controversy arose when one of her constituents contacted her to say her Pentagon-employed son had the job of covering up the execution of 5,000 people during Katrina.

She was also a ranking member of the International Relations Committee’s Human Rights Subcommittee but faced ostracization on both sides of the aisle for her radical politics. She pressured the Clinton administration to file reports with the United Nations on the status of racial discrimination in the U.S., and publicly shamed Bush on the eve of the Iraq War.

When her son was studying abroad in Italy he had more comprehensive health care than she had as a United States congresswoman. McKinney noted the relationship between accessible health care and quality of life. The United States is 45th in the world for life expectancy, whereas the countries with the longest life expectancies all have socialized healthcare.

Finally, she expressed concern for Oakland-based activist Tristan Anderson, who was critically injured by Israeli Defense Forces in the West Bank on March 13. “My boat was rammed, but I’m fine. He was just taking some pictures, and he’s still in the hospital six months later.” A concert benefit will be held for him at La Pena on Sept. 13. More information is on the Indybay community calendar.

The film crew from 393 Films that shadowed Cynthia McKinney throughout her Triumph Tour has just released this excerpt from McKinney’s speech in San Francisco Aug. 23, 2009.