Interviews with Cynthia McKinney by Davey D and Dennis Bernstein 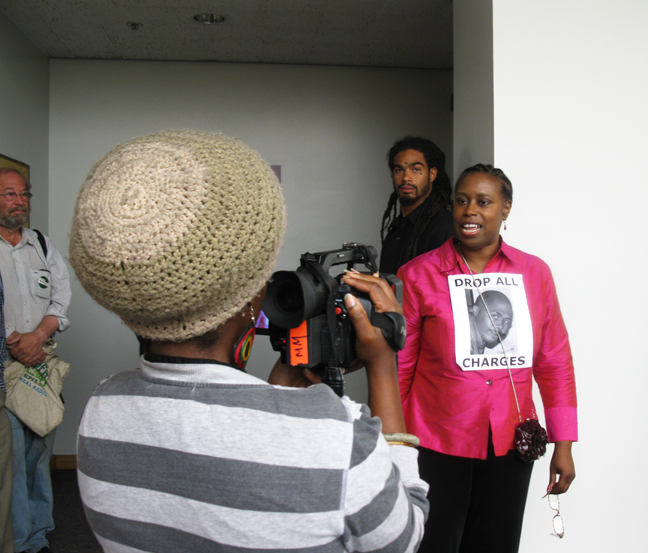 It is not unusual for injustice to be spoken out loud in a courtroom, especially when the defendant is young and Black and more so when, like Mumia Abu-Jamal, he is a journalist well known by the police as their severest critic. But as you read this, remember it happened in the presence of former member of Congress, only recently out of office, and 2008 presidential candidate Cynthia McKinney, who is held in the highest esteem by freedom lovers around the world.

Attending the preliminary hearing to support Bay View associate editor and Minister of Information JR, her long time friend, was so important to Cynthia that she rushed on Aug. 20, her first day of a five-day fundraising tour for the Bay View newspaper, from an early morning live interview on KPFA’s Morning Show to court by 9 a.m. She took copious notes throughout the hearing.

Because, having heard no good evidence against JR, the judge nevertheless decided the evidence was sufficient to proceed to trial, we must pack Courtroom 11 on Thursday, Sept. 3, 9 a.m., at 1225 Fallon St., Oakland. Apply the power of the people to keep him free to speak truth to power.

JR is fighting the ridiculous charge of felony arson of a trash can, which carries a three-year prison sentence. Bay View readers have been deprived of his photos since he was arrested Jan. 7 while covering the first rebellion following the police murder of Oscar Grant, because the police confiscated his camera and still have not returned it.

During her whirlwind five-day Triumph Tour of the Bay Area, Cynthia McKinney was interviewed twice about her impressions of what happened at JR’s preliminary hearing. [Both interviewers being KPFA broadcasters shows how important KPFA and the Pacifica radio network is to the Black community and to all Bay View readers. We at the Bay View strongly support Cynthia’s candidacy for executive director of Pacifica and urge readers who are members of Pacifica stations to elect boards who support her candidacy – ed.] Read what she said:

Davey D: We have in California a well-known journalist who stood up to deal with the Oscar Grant situation: JR, as we know him. You went to court and you got a chance to see how that process was playing out. Could you describe what went on in the courtroom as you saw it and what sort of implications does it have?

Cynthia McKinney: JR is a young Black man and his experience in court was just like that of too many other young Black and Brown men in this country. It was a travesty in my estimation because the attorney that JR had did an absolutely phenomenal job of impeaching the only witness, Officer Ruiz, who wrote the police report that ended up having JR charged with arson.

Davey D: For people who don’t know, he is a reporter that was documenting the demonstrations after Oscar Grant got shot here in Oakland and they accused him of lighting a garbage can on fire, but people feel its payback because he’s been doing a lot of reports about police terrorism and misconduct and he names names and puts their pictures in the paper and everything and the police didn’t like that too much. That’s how I see it.

Cynthia McKinney: It’s clear that the officer has trumped up charges. That was made clear by the brilliant attorney Marlon Monroe, who is representing JR.

And unfortunately the judge came back and said that JR’s behavior was reckless. Why? Because JR maintains his innocence. Now if that is the way that young people of color are treated in the judicial system, we have to do everything we can to do two things: Keep our young people out of that system and then make sure that we weed the bad apples out of such a system. Whatever happened to the presumption of innocence so that someone can defend their innocence in the courtroom? 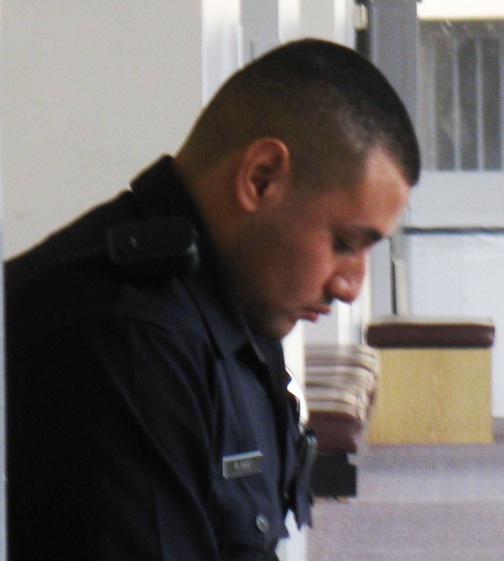 Davey D: This is what I wanted to get at. For people that don’t know, and this happens often times in court, the police will come along and let’s say they see me and I have expired tags. They might say, “Well, you have expired tags, but you also didn’t stop fully at the light.” And then they’ll look for something else and the next thing you know they want to charge me with about 10 different things that they can find.

And then when I go to court, instead of just being charged for expired tags, they’ll have 10 things and tell me we’ll make a deal with you and just have you get off easy if you only plead to five. That’s typical – making people plead out, and then we wind up doing time anyway for minor things. Is that what they try to do in these situations?

Cynthia McKinney: That is what they try to do. But President Obama in referencing the criminals in the Bush administration said that we’re looking forward; we’re not looking backward. Now that’s a strange thing for a constitutional attorney to say.

Dennis Bernstein: I just want to raise one story that I’m interested in particularly today and that’s the fact that our colleague here, a regular contributor to Flashpoints, was in the courtroom this morning facing serious charges for, I guess let’s just say, reporting while Black. This is what we believe.

You were in the courtroom. The judge wanted JR to cop a plea. About 90 percent I guess of the people who show up in courtrooms in that context end up copping a plea because they don’t have justice in an injustice system that does not allow people to get that net cold justice, to catch that bird if you don’t got the money.

Cynthia McKinney: Well, what I witnessed in the courtroom was truly a travesty. I do understand that travesties occur every day that U.S. courtrooms are open unfortunately. And here we’re talking about those who have committed the highest crimes not being in a courtroom. We want them in a courtroom. And then one of those culpable persons is actually training other young lawyers to evade accountability.

I would like to first of all commend JR’s attorney, Marlon Monroe. He was absolutely phenomenal. He went through every word of the police report. So the facts of the case involve what was written in the police report but also what was not written.

I mean there were so many things that he couldn’t remember, but he could remember that he saw that young man at 10:00 at night do something that is most unusual. He held a piece of paper that was burning, literally on fire, put it in a trash can, saw the flames erupt and then he walked toward the police officer.

Now, I mean, the story just doesn’t compute. Then after the officer was sworn in, the hearing really began to go downhill from there, because after the attorney really just thoroughly demolished the testimony of the officer, then we had a short break and the judge came back with his findings.

Now that’s when I think we all must have assumed or presumed that the judge had just landed from another planet because he clearly wasn’t where we all were in the courtroom listening to the officer. And he began his concluding remarks by saying that he found the officer’s testimony to have been – what was the word he used – he had confidence.

Dennis Bernstein: It was compelling.

Cynthia McKinney: It was compelling, yes. So now we’re really floored because it wasn’t compelling to us. Then the judge said something that was really, really shocking for a judge to say. And that is he characterized JR’s defense of his innocence this way: He said it “borders on recklessness.”

What in the world could compel someone to think that raising my hand and saying, “I am not guilty, your honor,” borders on recklessness? We have a presumption of innocence. So to carry out that innocence in the courtroom with statements of innocence and to defend oneself is not reckless; it ought to be the American way. What happened in that courtroom unfortunately is the American way for too many people.

Dennis Bernstein: I know what was on fire, JR’s microphone, because that’s what happens when you’re a truth-teller, particularly when you’re a young Black man and you’re out there saying, “What badge number is this?” “What are you doing, officer?” That’s the fire that that judge and that prosecutor and that collaboration with the police want to put out. I’m glad that you were in the courtroom.

Dennis Bernstein: And I believe the judge’s name is Philip V. Sarkisian, is that correct? I could be wrong.

Cynthia McKinney: Okay, let me look at the picture and I’ll tell you.

Dennis Bernstein: I don’t have the picture here; I just have a report from … there were several people in the courtroom. And now, so they tried to make JR cop a plea? They wanted to turn him into a criminal, throw him to the system?

Cynthia McKinney: Absolutely. Throw his entire reputation, throw his physical body, turn it over to these people, to their jurisdiction so that he is no longer a free man. We all must reject this because this is what is happening. How many people do we have? Two million incarcerated at this point. Incarceration nation is what the U.S. has become.

Listen to Dennis’ entire interview with Cynthia, broadcast on Flashpoints Aug. 20. The interview begins 17:57 minutes into the show:

Email Davey D at mrdaveyd@aol.com and visit daveyd.com. Listen to Davey on Hard Knock Radio Monday-Friday at 4 p.m. on KPFA 94.1 FM or kpfa.org. Investigative journalist Dennis Bernstein hosts Flashpoints, heard on KPFA 94.1 FM weekdays at 5 p.m. and archived at flashpoints.net and kpfa.org. Email him at dbernstein@igc.org.