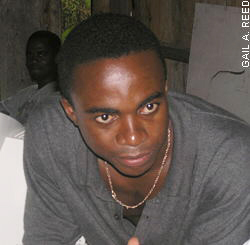 Despite objections by local Garifuna communities, Honduras’ de facto government is moving to take over the first and only Garifuna-managed hospital in the country, ousting its current staff. The facility – built by Dr. Luther Castillo, other Garifuna doctors, local architects and the communities themselves – is located in the remote coastal municipality of Iriona. [The Garifuna, descended from Africans who intermarried with native Arawak and Carib people, number about 600,000 on the Caribbean coast of Central America.]

In early August, says Dr. Castillo, the de facto ministry of health notified hospital staff that the facility was being downgraded to a health center “under new management.” “They told us that the Garifuna staff – both doctors and locally-trained nurses’ aides – will be fired,” he told MEDICC. “These measures would condemn to death many of our old and seriously ill people and stop all outreach and prevention services.”

However, he said the staff is staying put, and vows to continue working, even without the small stipend the government had provided in the past and with no guarantee of medicines or vital supplies.

“We will not abandon our people,” said Dr. Castillo. “These are the poorest of the poor, the invisible poor. They are the real victims of the coup,” he told MEDICC. “And they are the reason so many of our young people decided to become doctors in the first place.”

Some 300 representatives of local Garifuna governments gathered last week to support the hospital and its staff and have declared they will not recognize the de facto government’s takeover move.

The Garifuna hospital officially opened in December 2007 under an agreement with the government of President Manuel Zelaya and in accordance with an International Labor Organization covenant that supports locally-managed health services for indigenous and tribal peoples. Since then, according to Dr. Castillo, the 10 Garifuna doctors staffing the hospital have treated over 175,000 cases. The physicians – all graduates of the Latin American Medical School in Havana – attend patients at outlying clinics and on regular home visits. The original government agreement permitted this medically underserved region to rely on hospital services, including birthing, surgeries, hospitalization, dental care and laboratory tests.

The hospital and its community health outreach are supported by a number of U.S. and other international organizations, including the Sacramento Central Labor Council, Global Links, The Birthing Project and MEDICC. Several U.S. medical schools also have cooperative arrangements with the Garifuna hospital, including Johns Hopkins, Emory, Charles Drew and the University of California at San Francisco. Eight Cuban physicians and nurses also provide specialized services and academic training at the hospital.

A few weeks before the coup, Dr. Castillo was named director of International Cooperation in the Honduran Foreign Ministry. Since July 3, he has been included on a list of persons whose lives and safety were declared “at risk” by the OAS Inter-American Commission on Human Rights. 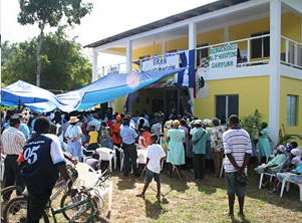 Dr. Castillo is featured in “¡Salud!” (www.saludthefilm.net), a documentary film that received the Council on Foundations’ Henry Hampton Award for Excellence in Film and Digital Media (USA).

Urge the U.S. government to act: Contact the White House, the State Department and your Congressional representatives. Press them to use the U.S. government’s influence to guarantee respect for the lives of Dr. Castillo, his colleagues and all those protesting the coup.

Save the Honduran Garifuna and all oppressed Hondurans 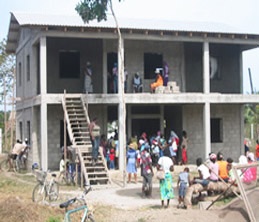 The Honduran de facto coup government under Roberto Micheletti plans to eliminate the Honduran Garifuna people and culture. Micheletti has rescinded the Manuel Zelaya authorization to teach in the Garifuna language in school and to teach the language itself. All scholarships to Garifuna students have been eliminated.

Now, Micheletti, with no opposition from the U.S. State Department, has set Sept. 1, 2009, to take over the Garifuna built and operated hospital and fire its Latin American Medical School (ELAM) trained Garifuna physicians, including Dr. Luther Castillo Harry, its founder.

The Garifuna doctors were trained at ELAM in Cuba and have served Garifuna and Meskito patients since 2005. Health indicators of these communities have shown considerable improvements since that time and their work is receiving increasing international recognition and support, such as from Project CHIMES under the direction of Bill Camp of the Sacramento Labor Council. The latter group provided funding and other support for the construction of the hospital and is continuing and broadening its support.

According to Bud McKinney, vice president of the Sheetmetal Workers International Association, Local 162, the hospital was built brick-by-brick by the Garifuna, who are now the proud owners of the only Garifuna hospital in the world which could soon be taken away by the de facto coup government with no protest from the U.S. State Department and Secretary of State Hillary Clinton. Lanny Davis, former campaign manager for Hillary Clinton and chief of staff for President Bill Clinton is now the chief defender of the criminal Honduran coup government under Micheletti.

Black physicians in the United States have experienced similar discriminatory prejudicial treatment as recently as the 1980s, only 25 years ago. According to Dr. Otis Brawley, chief medical officer of the American Cancer Society, “local chapters of the American Medical Society (AMA) had rules against Black members well into the 1960s and policies that made Blacks feel uncomfortable well into the 1980s.” Local medical societies in the U.S. beginning in the 1800s barred Black doctors, which prevented them from treating their patients in local hospitals. Abraham Flexner, chair of the AMA Commission on Schools in 1910, deemed all Black schools except Howard and Meharry universities substandard and urged they be closed.

Bill Camp, executive secretary of the Sacramento Central Labor Council, is preparing a resolution for the AFL-CIO National Convention in Pittsburgh Sept. 14-17 to embargo all trade with the U.S.-supported de facto coup government in Honduras. This is the most efficient and effective way to prevent the genocide of the Garifuna, to return democratically elected President Manual Zelaya to Honduras, punish Roberto Micheletti and the coup government and rescue the United States from its support of the Honduran coup government.

All groups should pass similar embargo resolutions and begin now to boycott all Honduran products such as coffee, fruit etc. Obviously, the situation is urgent. The life and culture of the Garifuna people are at risk as are democracy and justice for the Honduran people.