Review by Minister of Information JR 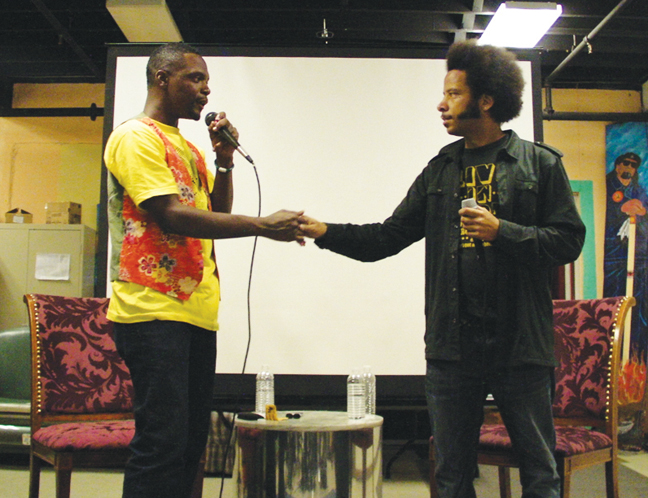 The first stop on the Ghetto to Gaza Speaking Tour was in Sacramento with the Hip Hop Congress at Capital Garage. The usual Wednesday event is their weekly open mic, but it was altered to feature M1’s experience in Cairo and Gaza. Then we went to East Oakland, San Francisco, Berkeley, West Oakland, San Jose, Santa Cruz and Sonoma.

Mutulu aka M1 spoke for about an hour and a half at each stop on the tour about how dirty the streets of Cairo were, being forced to stay in the hotel by armed government soldiers there, the Viva Palestina caravan breaking the siege and the embargo and being given 24 hours to stay in Gaza, Gazans trying to return home being “scraped” off the sides of the bus, and Israeli missiles that assassinated his Palestinian friend Ayman’s father and 17 emergency workers.

M discussed how British Parliamentarian George Galloway tried to use the caravan as a public relations tour for the Gazan government of Hamas. He talked about how Galloway ended up “bouncing” on the caravan after key people, including Cynthia McKinney, himself and Charles Barron refused to go with the program that could have set them up to look like supporters of terrorism when they really came to support the people of a war torn area with humanitarian aid.

At one of the emotion climaxes of his talks, M1 spoke about a situation when leaving that tested his emotional fortitude. This happened after a family was reunited for 24 hours and torn apart again, when the father tried to take his family with him out of Gaza on the caravan bus.

If you happened not to hear what one of the most intelligent brothers to ever touch a mic in rap music and our African Liberation movement had to say, you missed out on the making of history.

This fundraiser for blockreportradio.com and sfbayview.com did not garner the funds that our last one did with Cynthia McKinney, but it was just as important if not more, because it gave the perspective of a young Black male from the ghettos of Amerikkka, who happens to be a well known rapper, at a very key time in the history of the country, the age of Obama. This was a report-back from a political animal who found himself in Africa and the Henry Kissinger-created “Middle East.”

“The Ghetto to Gaza Tour was extremely important in order for me to introduce a global idea to our local community that now is the time to stand against the U.S. war against oppressed people around the world. And I am currently working with the BLACK IS BACK coalition (blackisbackcoalition.org) to help mount an anti-war strategy and a call to action to challenge this U.S. government’s policies,” said M1 aka Mutulu Olugbala.

To talk a little bit about what I know of the history of my comrade, I remember walking through the subways with M1 and his comrades while they were selling the Burning Spear newspaper and organizing, right before “Let’s Get Free” took off on its meteoric success at the beginning of the new millennium.

M1 is also the person who originally put me in contact with Chairman Fred Hampton Jr., who had just been unleashed after doing nearly nine years as a political prisoner in almost every concentration camp in Illinois.

M had a history with the Young Chairman, whose mother, Akua Njeri, he stayed with to help her free her son/comrade. At one point, he was the president of the Free Fred Committee and also a member of the National People’s Democratic Uhuru Movement. In fact Mutulu aka M was an organizer before he was an internationally known rapper. All of this history was explored over the sequence of the tour plus a few other things.

We also give a huge thanks to the regular people who came out and showed their physical support for M1’s Ghetto to Gaza Speaking Tour. Our community has to support tours like Ghetto to Gaza and media like the Block Report and the SF Bay View newspaper that support uncompromised voices.

The next tour on the schedule is Prisoners of Conscience Committee Chairman Fred Hampton Jr., who will be in Northern Cali talking about the 40th anniversary of the assassination of his father, Black Panther leader Deputy Chairman Fred Hampton of the Illinois chapter and his comrade, Defense Captain Mark Clark. This will take place from Nov. 7-14. Check in. Blockreportradio.com, deadprez.com and sfbayview.com are the websites.