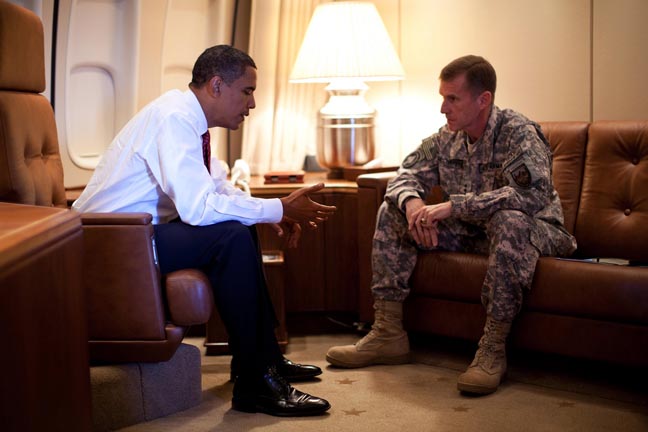 Americans await the decision President Obama will make relative to Gen. McCrystal’s proposal to send more troops to Afghanistan. Obama and McCrystal, the U.S. military commander in Afghanistan, are locked in a test of power that will have monumental effects on America for decades to come. There are definite indications that Obama does not favor sending more troops, but the general may have cleverly maneuvered Mr. Obama into a no-win situation.

Gen. McCrystal recently sent a formal proposal to President Obama in which he requested at least 40,000 additional troops for the Afghan conflict. The call for more troops is not the least bit surprising, but the way he went about doing it is; he decided to take his request to the public before sending it to his commander-in-chief. Someone in his organization leaked the document to the Washington Post. Thereafter, he appeared on 60 Minutes and then gave a speech in London about his Afghan counterinsurgency strategy. There is no question whatsoever that he is challenging this president’s authority.

The behavior and actions taken by our top commander in Afghanistan are very reminiscent of a similar scenario when, in April 1951, President Harry S. Truman removed Gen. Douglas MacArthur from his command of the United Nations forces in Korea when that famous World War II general tried to use the national press to pressure Truman to agree to bomb Communist Chinese bases north of the Yalu River. Truman wasted no time and fired MacArthur, that famous and respected war hero.

McCrystal, hardly of the public stature of MacArthur, should read the accounts of this historical incident and decide if he wants to risk becoming the modern-day MacArthur. He apparently has crossed the line between who makes the U.S. military policy and who is charged with carrying it out.

President Truman, when faced with gross insubordination by MacArthur, wasted no time in sending him into retirement. So now we wait while Mr. Obama, who does not like conflict or confrontation, decides what to do about Afghanistan – and, specifically, about his general.

Here’s a recent quote by Col. Lawrence Wilkerson, former top adviser to Secretary of State Colin Powell: “We had this happen one time before, with Douglas MacArthur — the right wing general who was fired after he defied President Truman over the Korean War in 1951.”

This is an extremely serious situation just as it was back in 1951. America stands at a critical crossroads and we had better make the right turn because of the great impact it will have on the future of our nation. While Mr. Obama is taking a long, deliberate look at the pros and cons involved, as he certainly must, he is taking all kinds of flak from right wing conservative war hawks in Congress, the military and the national media. They want him to accede to the general’s request and do it immediately.

There is no easy answer to this very important decision. If he approves the McCrystal recommendations, he will be blasted by the left and many Democratic moderates. If he decides not to add more troops, the bloodthirsty right-wingers will trash him unmercifully.

So what is he to do? Well, I have a recommendation of my own for him that is different from the two paths before him; and what I recommend is something I would hope that he already is mulling over. 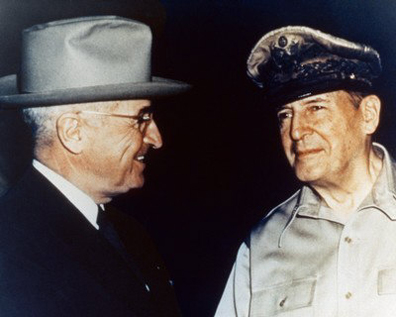 He must put aside the politics and base the decision strictly on what is in the best interests of the American people and, yes, also those millions of innocent Afghan civilians who are caught in the crossfire of the war. I know that this is a very difficult decision for our president, as it is almost impossible to keep politics out of the equation.

Afghanistan has now become Obama’s war and, if he escalates it further, there is almost no turning back. If he allows himself to be dominated and controlled by McCrystal and the Pentagon, this war may go on for years and years.

As President Lyndon Johnson found out to his dismay in the Vietnam War, once you let the generals get the upper hand, it is almost impossible to regain control. Mr. Obama, you better think long and hard and ask yourself if you want this nation to be caught up in yet another quagmire. Yes, this is a time for the real change you promised America; this is no time to repeat the tragic, devastating errors of Vietnam.

President Obama now has two very important issues to settle, two critical decisions to make. He has to accept, reject or offer an alternative to Gen. McCrystal’s troop recommendations. Secondly, he has to decide if he still can trust the general to follow his orders or whether he must send him down the fateful path taken by Gen. Douglas MacArthur.

Very soon America will see exactly what this man, our president, is made of. Is he just one more U.S. president who cannot stand up to the forces who promote endless war or one who has the courage to do what is right, no matter what the consequences of his actions. This will truly be a defining moment in his presidency.

Michael Payne, who lives in the Chicago area, writes mainly on social and political issues, U.S. foreign policy and climate change. His articles have appeared on Online Journal, Information Clearing House, Peak Oil, Google News and OpEdNews, where this story originally appeared. He can be reached through OpEdNews.