“I’m in full support of the effort to save Community Access TV. As of now, our live broadcasts will end Dec. 20. The last program of Freedom Is a Constant Struggle (broadcast Fridays at 7:30 p.m. on Channel 76) will be Dec. 18 – until further notice.” – Kiilu Nyasha

by Coalition to Defend Free Speech and SF Community Access 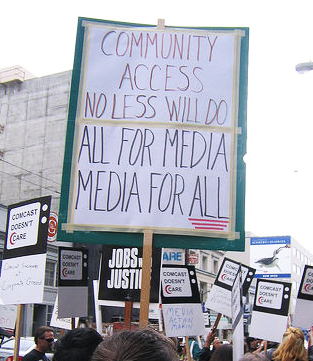 The City along with its handpicked operator, Bay Area Video Coalition, are planning to close the Community Access Television Center on Dec. 20 without another location where programmers can produce their shows. A picket and press conference will be held on this attack on community access and free speech on Tuesday, Dec. 1, 4 p.m., at Channel 29, 1720 Market St. at Valencia, San Francisco.

The City of San Francisco has handed over the operation of the Community Access Stations, Channels 29 and 76, to the Bay Area Video Coalition. BAVC promised to protect community access television in San Francisco and work with the producers and programmers. Instead it has done the opposite.

BAVC, with a multi-million dollar budget, has told producers and programmers that the station will be closing down on Dec. 20, despite the fact that the lease for the property does not expire until April 30, 2010, and it does not take four months to disassemble the equipment and studios. This means all productions from the Flash Studio and Main Studio will be shut down. BAVC has also said it does not plan to rebuild a main studio at its current location next to KQED. This takes place in San Francisco, a major center for media and communications in Northern California.

This also violates the promise of the San Francisco Department of Telecommunications and Mayor Newsom that they would protect community access in San Francisco. Many other communities, including smaller cities, have fully staffed community access stations with main studios. These include Berkeley, San Jose, Sacramento, Pacifica, Santa Rosa and San Rafael. Why is it that San Francisco, which is a large city, cannot do the same?

BAVC promised when they submitted their bid and after their takeover of the stations that they would work to protect the production and producers of programs. This has shown to be a false promise. Producers are abandoning Community Access shows that have been established by much volunteer labor over many, many years. BAVC has not even provided written notice about its plans to an elected community board of advisors for the station. Is this how BAVC does business in San Francisco at San Francisco Community Access?

Community producers and supporters of San Francisco Community Access demand that the City of San Francisco require that the studios stay open at 1720 Market St. until another station is constructed if there is to be a closure. We call for the cancellation of the contract with BAVC and the establishment of a democratically elected board that represents the community and labor to run the community access stations. The board of BAVC does not represent the interests of community access and refuses to even meet with producers and programmers.

The city has millions of dollars in capital funds that could be used to maintain the station. Instead, the City Attorney and Mayor Newsom want to close our studios and destroy public access in San Francisco.

Call the San Francisco Supervisors and ask them to hold hearings and to stop the closure and privatization of Community Access Television. Contact information is at www.sfbos.org.

This story first appeared on Indybay.