With their robotic, automatic,
lock-step precision marching to
a tune abiding their nightmarish
intentions like a theme to a horror movie.

There was no knock on the door,
the no-knock law was in effect
before it became law. We always
knew it existed, since no
sanctuary was inviolable for as
long as we inhabited the place
where our breath took up space.
For us, all of life had been
an occupational hazard!

They knew their target was a flag,
a banner dressed in black leather,
that the wind of freedom made it
wave. A flap like thunder clap,
awakening the dead. The living
dead whose thinking embraced the
lies that distorted our lives into
inhuman shapes of catatonic like-
ness in Frankenstein’s image. 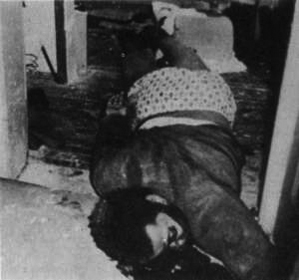 Before the dawn, they raided under
the blanket of a starfallen night,
dispensing fright, and murder, and
death … their bullets flew like the
spray of demented holy water to
exorcise, to purify in the gospel of
their racist might, sanctifying their
existence.

They claimed a victory as if they won
a bet, enriching themselves in blood,
like vampires they fed an insatiable
lust for power.

The wind of freedom never ceased,
the black leather flag draped over
their coffins like a symbol to his
immortal words.

Written in 2002, reprinted to commemorate the 40th anniversary of the assassination of Chairman Fred and Captain Mark

Casting aspersions fact laden
holding down the news of the
guilty while Cheney speaks about
CIA leaks that creeps on Obama’s
peeps seeking to end harsh interrogation
to the elation of Al-Qaeda.

Liberty screams as the Janus baby
emerges splitting her pelvis while
Rush Limbaugh pleads innocent to
the charge of rape. The Supreme
Court rules it was an act of freedom
of speech, and the Surgeon General
relieves our anxiety with Homeland
Security color-coded pills prescribed
by Bayer and Scribb to the
consternation of Proctor and Gamble.

As the corporation that is the United
States continues to spawn hypocrisy!

Remember: We Are Our Own Liberators! 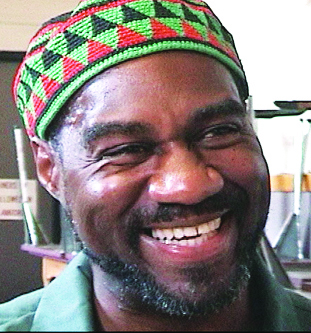 Jalil Mutaqim, one of the longest held political prisoners in the U.S., was once again denied parole on Nov. 18, 2009. One of the San Francisco 8, persecuted continuously since the Black August 1971 killing of a San Francisco police officer, allegedly in retaliation for the assassination of George Jackson on Aug. 21, 1971, he has been behind enemy lines since a week later, Aug. 28, 1971. He was recently transferred back to New York after a miserable two and a half years in San Francisco County Jail when he traded a minor plea for the freedom from all charges of four of his SF8 comrades.

Visit FreeJalil.com to learn more about this extraordinary, heroic brother. Here are a few highlights: The petition he drafted to the United Nations in support of U.S. political prisoners led to the firing of U.N. Ambassador Andrew Young, when Jalil suggested that a reporter ask Ambassador Young the single question, “Are there political prisoners in the United States?” and Andrew Young answered, “Perhaps thousands.”

Jalil was accused of organizing the Attica Brigade, allegedly to retaliate against prison guards’ brutality, and he challenged the 13th Amendment for making prisoners slaves of the state with a lawsuit and U.N. petition, drafted a bill to win lifers good time that was sponsored in the New York Assembly, taught Black/Afrikan Studies, established the first Men’s Council in a U.S. prison as reported in the New York Times, graduated summa cum laude with bachelor’s degrees in psychology and sociology, earned a vocational certificate in architectural drafting, filed a lawsuit to grant prisoners the right to vote, lobbied the Congressional Black Caucus to reopen COINTELPRO hearings, co-sponsored the Victory Gardens Project to grow and distribute farm-fresh produce in poor urban neighborhoods, taught computer literacy, established a parenting class for young fathers and organized a campaign to provide school supplies to AIDS orphans in Africa. A published poet and essayist, Jalil’s writings are found in several university-sponsored books of compilations of prison writers. He has also written an unpublished novel and teleplay.

Jalil maintains strong bonds with his family. He and his daughter and granddaughter were featured in the November 2000 issue of Essence Magazine in an article titled “Daddy Says,” discussing father and daughter relationships. Support must grow so that his next parole date, in June 2010, is successful and he is free to return to the loving arms of his family and to continue to teach and show us how to be our own liberators.