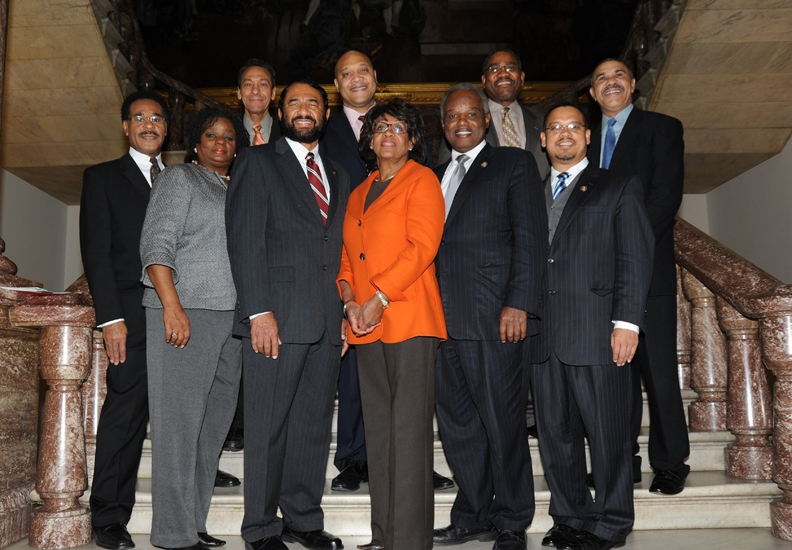 Washington (NNPA) – The 10 Black members of the powerful House Finance Committee are still being applauded this week by the Black press and Black leaders nationally for boldly boycotting a committee meeting in order to force a $4 billion allocation to benefit the Black community. They have told the NNPA News Service that they plan to escalate protests if lawmakers continue to ignore the suffering of their constituents, including advertising discrimination against Black newspapers.

“We’re out of the box, we’re full speed ahead and we are not going to sit back and watch our communities suffer in silence,” says U.S. Rep. Maxine Waters, D-Calif., the ranking Congressional Black Caucus member on the committee, who led the Dec. 2 boycott.

Describing horrid conditions in their districts that clearly illustrate disparate suffering in the African-American communities, each of the 10 members – in separate interviews – described what their constituents are dealing with and told why they must continue to act.

“Members of the Congressional Black Caucus are being bombarded with requests for assistance by minority businesses that have no capital,” continued Waters. “The banks won’t lend them any money. They’re either closing down or threatening to be closed down.

“The joblessness is off the scale. Not only do we have long lines seeking unemployment (assistance), but on Thanksgiving Day around the country – including the scenes that came out of Atlanta and Los Angeles – there were thousands of people standing in line for turkeys and turkey dinners. In Los Angeles, I walked a four-block square place where they were giving out baskets. In that line were the disabled. One lady was 94 years old.”

Joblessness, frustration, hopelessness – the sentiments are synonymous from state to state.

“They’re going through a tremendous, tremendous desperation effort,” said Rep. David Scott, D-Ga. “Even if you look at all of your own newspapers, advertising dollars are not there. We sit here as Congress people with tremendous leverage and power. It was so important for us to use that leverage.”

Rep. Barbara Lee, D-Calif., chairwoman of the Congressional Black Caucus, is supportive of the Financial Services Committee’s stance and said in a statement following remarks by President Barack Obama on job creation and economic growth: “President Obama’s speech was another sober reminder of the important work we must do to grow our economy and create jobs. While we agree with the president that support for small businesses, infrastructure investment and green jobs is essential, we also believe that much more needs to be done, particularly for those Americans who are hurting most.”

What the 10 Black members did was boycott the committee’s final vote on a broad-sweeping financial overhaul bill. Instead, they were over at the White House trying to obtain greater funding for economic advances in the Black community. The vote passed narrowly, but the CBC’s action effectively forced $4 billion to the table to go directly toward helping people keep their homes after they’ve lost their jobs.

In addition to the needs of Black businesses, home owners and the jobless, a news release describing the boycott specifically cited the importance of spending federal advertising dollars with Black newspapers.

“Like other businesses, access to capital has been a challenge for this industry as well. With declining ad revenues, newspapers everywhere are struggling to survive,” the statement said. 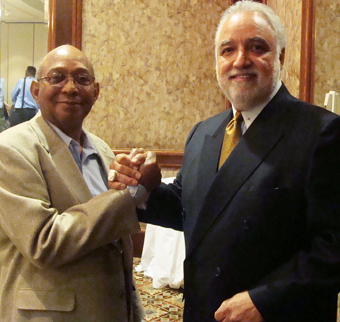 Danny Bakewell, chairman of the 200-member National Newspaper Publishers Association, was credited by several members for helping to spark the protest by his firebrand lobbying around Capitol Hill.

Bakewell said he is delighted at the stance taken by the CBC, but much more must be done to recognize the power of the Black press to the nation.

“We have been the backbone and the foundation on which America was built. And in this case, what we are realizing is that we continue to be the foundation on which many of these corporations make their profits and develop their brands throughout the country and we’re not going to continue to sit idly by and let them do that while the very fabric of our community is crumbling from within. We’re serving notice on General Motors, Ford, Toyota and other automotive companies and the automotive industry that there will be no more business as usual.”

Bakewell and NNPA Foundation Chair Dorothy R. Leavell, as well as Mollie Belt, second vice chair of NNPA and Michael House, NNPA marketing chairperson, have begun a series of meetings with corporations and have already made inroads.

“We’ve met with AT&T. They have been very receptive. They represent what we believe at this point we can say is a good corporate citizen,” Bakewell said. “We’re not asking for a bailout or a handout; we’re asking for reciprocity and respect.”

Bakewell explained that the Black community, Black newspapers included, are being shortchanged for the dollars they spend with businesses and corporations.

In order to avoid legal ramifications, the committee agreed to target the money toward communities with the highest socio-economic impact rather than by race. That includes most of the CBC districts.

“Across the country, it is absolutely shocking,” says Rep. Al Green, D-Texas. “It is very unfortunate that we have to make this commentary, but the truth of the matter is that there are people who are suffering and who have not been identified properly … We cannot leave these communities behind. If it goes to the areas where the unemployment is the highest, it covers the people who are suffering the most.”

Green says his office has found that the federal government spends about 5 percent of $4.3 billion for ad-related expenditures on small business and minority businesses.

Part of the money will come from the TARP (Troubled Asset Relief Program).

“There’s no more troubled assets than a job and your home,” says Scott. “So, now we are using our muscle to address the high jobless rates in our communities and the high foreclosure rate.”

CBC members are hoping to get even more as they continue to use creative ways to call attention to the swelling problems in the Black community that have shaken up the offices of the CBC members.

“The traditional role of a member of Congress before the economic downturn was to basically intervene with the federal government agencies on behalf of constituents (when) people didn’t get their VA checks or social security checks or they were needing help getting their travel documents or visas or passport,” says Rep. Mel Watt, D-N.C. “But disproportionately now, people are calling for grassroots down-in-the-community help.

“’I need food.’ ‘I need housing.’ ‘I need to be protected from a foreclosure.’ ‘I need assistance with mortgage modification.’ ‘I need you to find me a job.’ Businesses are calling saying, ‘I can’t find any loans, I can’t get credit.’”

They’re receiving the calls and emails every day, says Rep. Keith Ellison, D-Minn. “They say, ‘When’s our turn?’” Ellison recounts. “We need real jobs programs. We need something to help small minority businesses. We need to know that there is a vibrant, historic and very strong African-American business community here in the United States and in my state of Minnesota. It really struck me that every single industry is being severely impacted.”

Congressman Gregory Meeks, D-N.Y., says his district has been hit especially hard in homeownership. “My district in the city of New York is number one in foreclosures. So, more people are losing their homes and thereby losing wealth. And so much so that I’ve had to get not-for-profit organizations that have expertise in helping individuals work through these problems,” he said.

“We really can’t make a decision in trying to save people’s homes. So they’re feeling that the dream that they had, the American dream of having home ownership, they had it, but they’re losing it and as a result losing their credit, which might mean they may not be able to gain it again.”

Rep. Lacy Clay, D-Mo., says it’s like the lifeblood flowing out of the communities. “Missouri, like the rest of the country, is hemorrhaging, especially in the African-American community, from the economic woes of this country … There is no job creation, there is no rescue or bailout for those African-Americans who have been caught in a cycle of home foreclosures, job losses and health care benefits. All of that is precarious to our community, unique to our community.”

Rep. Emanuel Cleaver II, D-Mo., says his constituents are wise to the fact that they’ve been neglected while big businesses were bailed out. “It is not just impacting the uneducated; it’s impacting the entire community. We gave General Motors billions of dollars. They don’t advertise in Black newspapers. They don’t advertise on Black radio. That’s not right. And there’s no reason for us to remain passive or silent as that’s happening.”

CBC members have known all along about the disparate treatment of Blacks. But recently they were enlightened to the point of taking their consciousness to a new level of protest.

“As we worked through the process of getting to the point where we were going to vote for the final Wall Street bill, it became more and more difficult for the 10 members of Financial Services to vote for it because it felt like we were navel gazing,” said Rep. Gwen Moore, D-Wisc. “We saw that we were presiding over the entire collapse of the Black economy. We had to make a decision about how to get attention on a whole sector of our economy that was about to go under. It wasn’t like the Black community was getting a haircut; we were being beheaded.”

“We saw that we were presiding over the entire collapse of the Black economy,” said Rep. Gwen Moore, D-Wisc. “We had to make a decision about how to get attention on a whole sector of our economy that was about to go under. It wasn’t like the Black community was getting a haircut; we were being beheaded.”

With the Black unemployment rate surpassing 15 percent, while the overall rate is at 10 percent, there is one cry above all others for which the CBC vows to continue to stand:

“Jobs, jobs, jobs, jobs, jobs,” lamented Rep. Andre Carson, D-Ind. “We’re dealing with so many contentious issues in Congress, to see people who are bold and unapologetic, you can’t do anything but respect it. Whether you agree or disagree philosophically, the boldness that comes with that stand can’t be overlooked.”