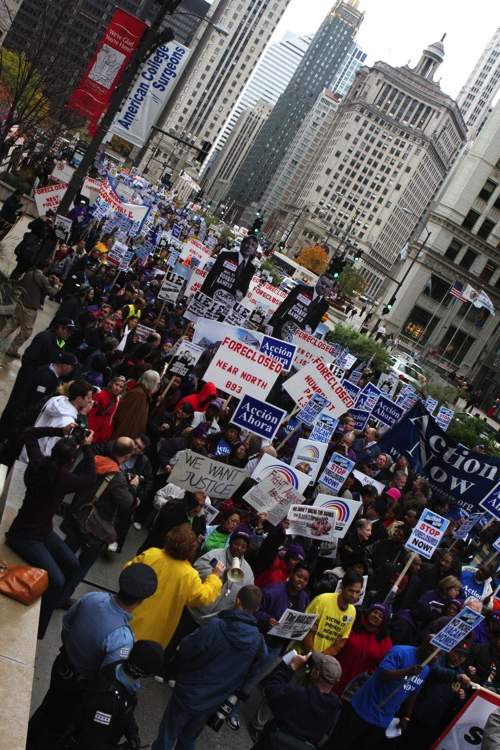 “I applaud and welcome the passage of H.R. 4173, The Wall Street Reform and Consumer Protection Act,” declared Congresswoman Barbara Lee, chair of the Congressional Black Caucus (CBC), several of whose members, led by Congresswoman Maxine Waters, were responsible for the bill’s key provisions. “This legislation will provide critical financial reforms and strong protections for consumers.

“For too long our financial regulatory framework put the protection and stability of financial institutions first and too often ignored the impact on American consumers and retail investors. The Consumer Financial Protection Agency will help ensure that Wall Street will not be able to bring our economy to the brink of disaster ever again,” said Lee.

“This debate about the proposed consumer protection agency is a big, big deal for Black America,” Kai Wright, senior writer for The Root, had written on Nov. 10 in “Why Black People Took to the Streets in Chicago.” When several thousand people “stormed into the banks’ annual confab in Chicago to demand accountability” on Oct. 26, he explained, a majority “were Black. That’s refreshing because nobody has more at stake here than Black America. We were targeted with the toxic lending products that ultimately broke the world – much as Black consumers have long been targets of lending predation, from redlining to payday loans to tax scams. No surprise, then, that our neighborhoods are collapsing under foreclosure. And no surprise that Black unemployment has hit 15 percent. This debate is a big, big deal for Black America.”

Before the Black Caucus took charge, banks – “the same banks that taxpayers gave hundreds of millions of dollars last year,” finance firms and the U.S. Chamber of Commerce had severely eroded the bill, spending millions of dollars on lobbying and making it clear that “they own Congress,” observed Wright. At that point, it was barely a shadow of the vision President Obama had sent to Congress in July.

“He envisioned sweeping reforms to the existing regulatory framework, which has failed spectacularly to protect regular Americans from Wall Street’s shenanigans. Obama’s new agency was to safeguard consumers of everything from check-cashing joints to home mortgages, all under one, independent roof,” Wright wrote.

Before the Black Caucus took charge, banks – “the same banks that taxpayers gave hundreds of millions of dollars last year,” finance firms and the U.S. Chamber of Commerce had severely eroded the bill, spending millions of dollars on lobbying and making it clear that “they own Congress,” observed Kai Wright.

Rescuing that vision took a walkout by the 10 CBC lawmakers on the Financial Services Committee moments before it was to vote on the reform bill Nov. 19 and, on Dec. 2, a boycott of the final vote. “They got the message,” Waters said, according to the Times. 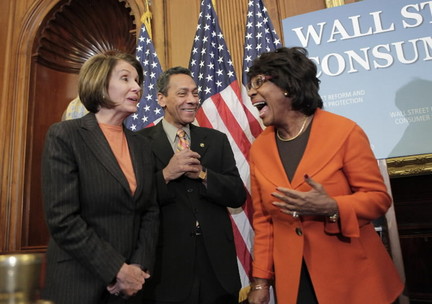 Congresswoman Maxine Waters led those 10 Black Caucus members in securing $4 billion within the Wall Street reform package for homeowners and communities dealing with the foreclosure crisis. The CBC Financial Services Committee members engaged in discussions with leaders of Congress as well as officials from the Obama administration to focus attention on the economic challenges many African-American communities are facing and secure funding for homeowner assistance programs.

“This Wall Street reform bill will allow us to stop risky banks and other institutions before they create systemic problems for our whole economy and will provide for a historic Consumer Financial Protection Agency to advocate for the needs of homeowners, consumers and borrowers. And through our advocacy, the CBC members on the Financial Services Committee made it clear that foreclosures and unemployment also pose systemic risks to American families and needed to be addressed in this bill,” said Congresswoman Waters.

Under the CBC proposal included in the bill, a total of $3 billion would be available so homeowners with reduced income as a result of unemployment, underemployment or medical conditions can receive low-interest loans from the Department of Housing and Urban Development (HUD) to help them stay in their homes. To qualify, individuals must be at least three months behind on their mortgage payments, have received a foreclosure notice, and must have a reasonable prospect of being able to resume making full mortgage payments. Homeowners will be eligible to receive low-interest loans for up to 24 months, up to a total of $50,000, to make their mortgage payments.

An additional $1 billion will be directed to the Neighborhood Stabilization Program to provide grants to state and local governments to purchase foreclosed properties, fix them up and make them available for rent or purchase by low- and middle-income families. Created last year through legislation authored by Congresswoman Waters, the Neighborhood Stabilization Program has been a key tool for local governments combating the foreclosure crisis.

Congresswoman Waters also secured key provisions related to diversity and consumer protection within H.R. 4173 during consideration of the bill within the Financial Services Committee.

The Committee adopted an amendment from Congresswoman Waters and the other CBC members establishing Offices of Minority and Women Inclusion at all major federal financial agencies, including the Department of the Treasury, Federal Deposit Insurance Corporation, Federal Housing Finance Agency, the Securities and Exchange Commission and each of the Federal Reserve Banks, along with other agencies.

“Federal financial services agencies have historically lagged in providing contracting and employment opportunities to qualified minority professionals. This provision represents an unprecedented and long overdue step towards ensuring diversity and inclusion with respect to employment and business opportunities with the federal government,” said Congresswoman Waters.

Another amendment authored by Congresswoman Waters will restructure the Oversight Board of a new Consumer Financial Protection Agency to reflect consumers’ voices. The Congresswoman’s amendment expanded the board to include not only officials from federal government agencies, but also experts and advocates in the areas of consumer protection, fair lending and civil rights, representatives of depository institutions that operate in underserved communities, and advocates from communities most affected by subprime and predatory loans. 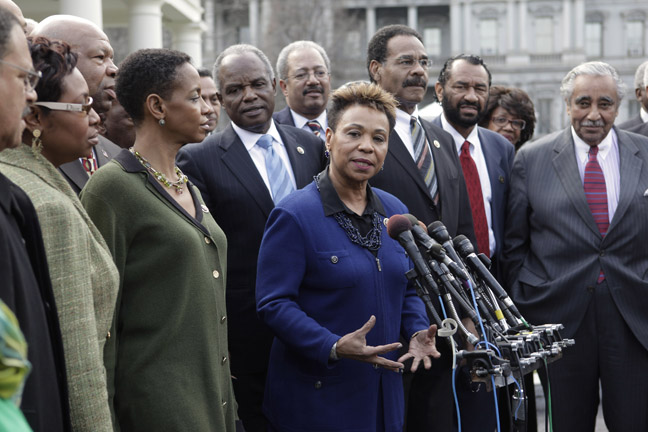 An additional amendment authored by Congresswoman Waters and adopted within the Financial Services Committee requires the Financial Services Oversight Council, an advisory panel made up of 11 state and federal financial regulators which would identify systemic economic threats, to consider the economic impact of the default of a failing institution on minority and low-income communities. The provision would also require the appropriate federal regulatory agency to take steps to avoid or mitigate the potential adverse effects on such communities before winding down the systemically risky financial firm.

The committee also passed an amendment offered by the congresswoman to crack down on foreclosure rescue scams that prey on vulnerable homeowners by requiring that attorneys participating in foreclosure prevention services be subject to regulation by the new Consumer Financial Protection Agency.

H.R. 4173 also includes a provision authored by Congresswoman Waters to obligate the new Federal Insurance Office to consider the extent to which minorities, low- and moderate-income persons and underserved communities have access to affordable insurance products.

Speaking of Congresswoman Waters, Rep. Emanuel Cleaver was quoted by the Los Angeles Times on Dec. 11, the day the bill passed, saying: “If she is for you, you don’t mind facing a formidable army. If she is against you, she is the army.”