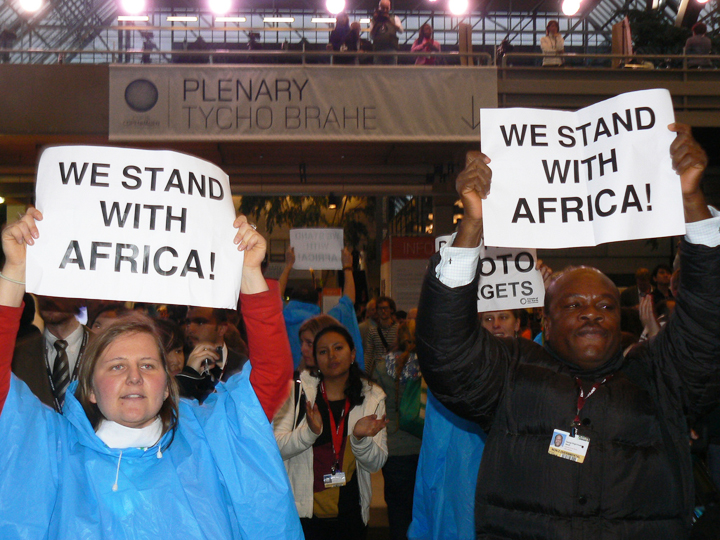 Copenhagen (IPS/TerraViva) – The U.N. Climate Change Conference entered its final week under a cloud of uncertainty as the Africa Group led a protest of the developing world against a perceived attempt to abandon the Kyoto Protocol.

Monday found long lines of delegates and observers waiting to clear security at the Bella Center’s entrance. The now-familiar invitations to this or that side event in the background, you could hear people discussing the fate of precious clauses over the weekend, and murmurings of trouble brewing in the official process.

One of the day’s early press conferences found the Africa Group unhappy with the way the formal discussions are being structured. The group spoke against an order of business that seems to follow a developed country preference to discuss a single track for negotiations. Africa prefers to continue with parallel discussions that would preserve the imperfect but legally-binding structure of the Kyoto Protocol while negotiations continue over a binding replacement for the long term.

By the middle of the day, the Africa Group’s displeasure had brought official talks to a halt. Africa told the chair of the working group on a long-term treaty that it would simply not participate in any negotiations or contact group discussions until movement restarted on the parallel discussion of the Kyoto Protocol.

The protest was supported by AOSIS (Alliance of Small Island States) and quickly became a G77 position, stalling the talks. The G77, led by Lumumba Di-Aping of Sudan, represents 130 developing countries, from major powers China and South Korea to the world’s poorest and most vulnerable nations.

Di-Aping explained why the G77 had decided not to co-operate: “It has become clear that the Danish presidency – in the most undemocratic fashion – is advancing the interests of the developed countries at the expense of the balance of obligations between developed and developing countries,” he told BBC Radio 4’s The World at One program.

“The mistake they are doing now has reached levels that cannot be acceptable from a president who is supposed to be acting and shepherding the process on behalf of all parties.”

The developed world wants to replace the 1997 Kyoto Protocol with an entirely new agreement, the BBC reports. But developing countries “point out that the Kyoto Protocol is the only international legally binding instrument that has curbed carbon emissions, and also that it contains functioning mechanisms for bringing development benefits to poor countries such as money for investment in clean energy projects,” according to the BBC. 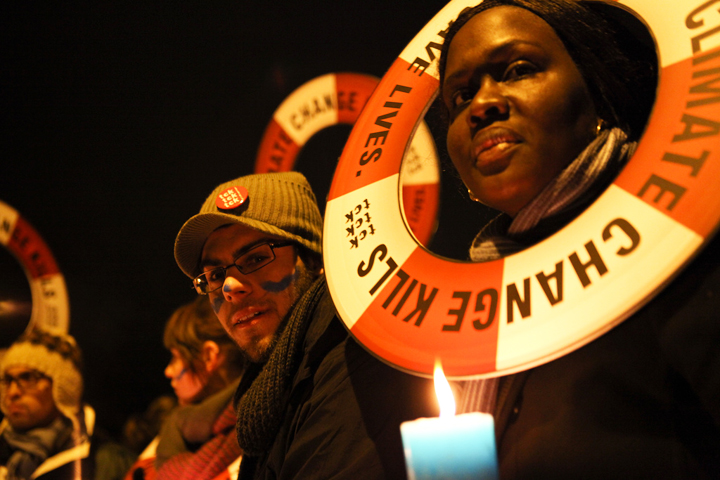 The Climate Action Network, in its daily media briefing on the state of negotiations, announced that having studied the various commitments on the table as the new week began, a deal signed on that basis today would lead to increased emissions that would mean an estimated 3.9 degree rise in the average global temperature.

The network, a coalition of 450 environmental and social justice organizations from around the world, said there had been progress by negotiators on technical cooperation and building capacity towards a plan to reduce damage to forests. Two years of very slow progress had been rapidly advanced by the release of draft texts by the chairs of the working groups, the network said, although little had been achieved on difficult political issues.

Several key points were highlighted, including disagreement over emissions targets, the question of long-term financing, and the scale of such support.

China and other major polluters from the developing world have proposed only conservative targets for reducing emissions – failure that is linked to the reluctance of developed countries to pledge significant funding to the roughly $200 billion a year that will be needed for adaptation, mitigation, technology transfers and capacity building.

As growing numbers of ministers arrived in Denmark, the Climate Action Network stressed that the biggest failure thus far was political leadership.

Marcelo Furtado, executive director of Greenpeace Brazil, said it was clear the negotiators had not been given mandates allowing them to resolve thorny questions.

Furtado pointed out that when Brazilian industry resisted the abolition of slavery 120 years ago, maintaining that they could not afford it, the moral argument that was raised prevailed in the end.

“Here we are 120 years later, looking at a very similar scenario. People are saying there is no moral discussion, (the debate has been) only about technology, only about finance,” the Greenpeace campaigner said.

Marcelo Furtado, executive director of Greenpeace Brazil, pointed out that when Brazilian industry resisted the abolition of slavery 120 years ago, maintaining that they could not afford it, the moral argument that was raised prevailed in the end.

Where major, long-term funding is called for, the developed world has thus far offered only short-term financing. Emerging economies such as China, India and South Africa have not responded to the call for them to make firm commitments to act quickly to reduce their emissions.

“The challenge this week is to ask for vision, responsibility and leadership. And that falls on the shoulders of everyone: of developing countries like Brazil, China and India who will have to agree to their commitments being measured and verified, but also to the developed countries that ought to put money on the table and show willingness to raise their ambitions,” Furtado said.

India’s negotiator told the press last week that its priority was economic growth and adaptation to harmful effects, with mitigation taking a back seat. South Africa’s behavior was soundly condemned at another press conference, where Friends of the Earth International criticized a massive new World Bank loan to the country (double its total commitment to renewable energy worldwide) for the construction of massive new coal-fired plants.

A deal to reduce emissions due to deforestation has been prominent since the start of the conference. But on this front, campaigners were concerned that over the weekend vital safeguards for indigenous people have been moved out of the legally-enforceable main body of the text, to the preamble.

Dr. Rosalind Reeve of Global Witness pointed to Papua New Guinea, Ghana – speaking for the Africa Group – and India as having worked over the weekend to remove the clear phrase saying parties “shall implement” and replace it with the much weaker “should protect.”

If these safeguards are lost, Reeve said, there are no guarantees for indigenous people’s rights in REDD (Reducing Emissions from Deforestation and Forest Degradation).

This story first appeared on the IPS site TerraViva, where COP 15 Climate Change Copenhagen 2009 stories are compiled. Material from BBC News’ “Climate negotiations ‘suspended’” by Richard Black has been added. Terna Gyuse, based in Cape Town, South Africa, oversees production of articles for IPS from Africa along with the editor from francophone Africa, Ali Idrissou-Toure, who is based in Cotonou. He was previously assistant producer for Free Speech Radio News. Terna can be reached at tgyuse@ips.org.

Terna Gyuse on journalism in Africa

In this video made by FarmingFirst.org, Terna Gyuse, a Cape Town-based editor with Inter Press Service (IPS) speaks during the FANRPAN regional policy dialogue in Maputo, Mozambique, in September 2009. Gyuse discusses journalism in Africa and the critical role journalists play in monitoring development processes on the ground and reporting on climate change and agriculture ahead of Copenhagen.

Terna Gyuse on Journalism in Africa from Farming First on Vimeo.

Evo speaks for me!

Three calls from Copenhagen for Obama to champion climate justice