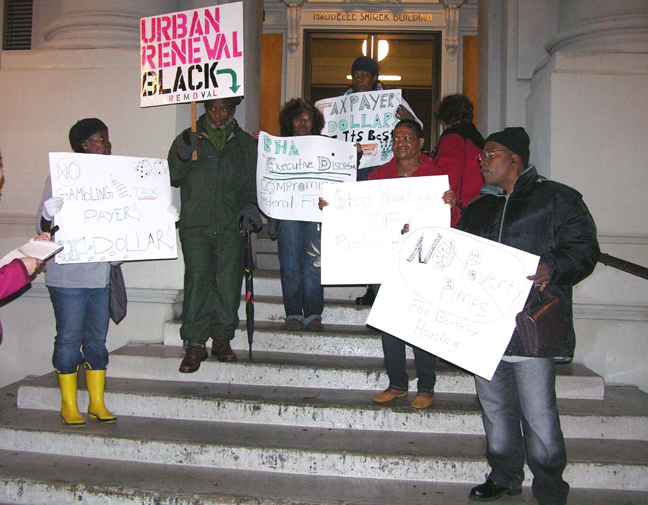 Berkeley – Public housing and Section 8 tenants appeared at the Jan. 19 Berkeley City Council meeting to protest and speak out against alleged illegal activities of the Berkeley Housing Authority (BHA) and its policies to privatize and sell their 75 public housing units to an unnamed nonprofit housing developer.

Tenants held protest signs in front of Berkeley’s Old City Hall in between harsh rain storms pounding the Bay Area before stepping inside Tuesday’s City Council meeting to demand the resignation of BHA Director Tia Ingram and a few BHA board members involved in the actions to privatize and sell housing that was built as recently as the mid-‘80s. The residents face displacement and homelessness as a result.

Public housing provides housing to poor people who live on Social Security, General Assistance, SSI or CalWORKs and those with no income at all. If their homes are privatized and sold to a nonprofit developer, tenants are concerned that they may face discrimination because nonprofit housing developers have minimum income requirements that disqualify many poor people from residing in their subsidized housing projects.

Among the many low-income tenants who spoke before the City Council were Keith Carlisle, Zsanna Secreas, Penelope McKinney, Tequoia Nickson and Rose Flippin. They spoke out passionately against the BHA’s policies and alleged wrongdoing by BHA staff, while stating that around 209 low-income residents are affected by the BHA’s poor behavior: inadequate housing that has been allowed to deteriorate, infestations of bugs and cockroaches, and actions that have unlawfully tossed Section 8 tenants out of the housing assistance program.

“We are opposed to the selling of our public housing and are calling for a full investigation into the activities of BHA Director Tia Ingram and some board members, including BHA Chairperson Carole Norris, for the mismanagement of Berkeley’s public housing program and the lack of repairs to our housing,” said Rose Flippin.

Penelope McKinney feels victimized and said: “I was terminated from Berkeley’s Section 8 program around a year ago and was accused of filing my papers too late when I tried to renew my contract and was never given a grievance hearing to appeal the decision. I have a severely handicapped son and have never been so frightened in my life of becoming homeless.”

Homelessness is on the rise nationwide due to budget cuts and a failed economy, and recently the National Health Care for the Homeless Council reported that the average age of death for people experiencing homelessness is 50 years, compared to 78 years for Americans with homes.

“We have problems with deferred maintenance and want to preserve our public housing,” Tequoia Nickson says, “because affordable housing is not as affordable as the nonprofit developers want the public to believe. I have a family of four, and we hope to save public housing.”

Public housing tenant Keith Carlisle said, “Now that the mismanagement of the BHA administration and its board are being called into question by HUD, the BHA director and board want to sell off the problem that they have created. We say no. We say you messed up and you must take responsibility and clean it up. We want a new business model that places us, the tenants, in partnership with BHA and HUD.”

“In closing,” said Carlisle, “we ask that you recall the board that you created. We believe that a conflict of interest exists. Carole Norris, chair of the Board of the Berkeley Housing Authority, works for ICF Consultants. We understand that this company is a paid consulting firm hired by the city of Berkeley for advice.

“Part of this company’s mission is helping to provide ‘affordable housing strategies.’ We don’t feel that Ms. Norris has our best interests in mind. She is a major advocate for privatizing our family homes.

‘We want a new business model that places us, the tenants, in partnership with BHA and HUD.’ – Keith Carlisle

“We also ask that you fire Ms. Tia Ingram. The executive director of BHA, she has committed several illegal acts. She has closed the waiting list so that public housing tenants who wished to move could not do so without losing their subsidy.

“Secondly she continues to retaliate against tenants who exercise their rights as they relate to habitability issues in their units. We have had enough of her and her intimidation tactics,” Carlisle declared.

“We ask you, the City Council, to retake the roles of commissioners and help us to save our public housing. Disposing of public housing is not a viable option, and public housing needs to be here for current and future generations of poor people needing low-income housing, regardless of their income,” Carlisle concluded.

Councilman Max Anderson stated that he is concerned about the tenants’ complaints and said he knows that when so many come forward to speak out publicly, something must be seriously wrong in the housing authority.

Councilman Kriss Worthington has supported the public housing tenants in their opposition to the sell-off of their homes, and the tenants will continue to try and get the issue on the agenda for a future City Council meeting so they can voice their full concerns.

The public housing residents invite the public to join them in the struggle to save Berkeley’s public housing. They meet weekly on Saturday mornings from 10 to 12 noon at Intercity Services, 3269 Adeline St., in Berkeley. Everyone is welcome and urged to attend.