Harper’s Ferry … freeing slaves … Virginia … hanging … white man – this is the extent of my knowledge of John Brown. I wasn’t aware that it was 150 years ago, on Oct. 14-15, 1859, that this happened, an event which many say forecast the Civil War and the emancipation of enslaved Africans.

Ninety minutes without intermission, a live jazz band using improvisation to accompany the chorus and soloists, who took turns in the lead role of Brown, the scenes move quickly as the events of 1859 in Ohio proceed with a foiled escape to Canada and capture of Brown and escapees, who stand trial, are found guilty and then hanged.

I wasn’t aware that Brown quoted scripture and had visions like Nat Turner. Was this common with most abolitionists? Seems like it. In the book that one set of white people use to justify enslaving other human beings, another white person finds evidence of slavery’s evil.

I loved the cast’s voices. From Raymond Nat Turner to Maria Medina Serafin, Eliza O’Malley and Duana Leslie as John Brown to Zigi Lowenberg as preacher, it was cool listening to the different voices dramatize their scenes. I wonder if the actor or actress’s voice was a determining factor in who got what scene.

I really liked Eliza’s dramatic presentation. She got on her knees and used the entire stage to tell her story. I liked Duana and Maria as well. Zigi was a sourpuss preacher who argued vehemently with Maria’s John Brown, who said her religion or reading was not Christian, based on the teaching of her lord. 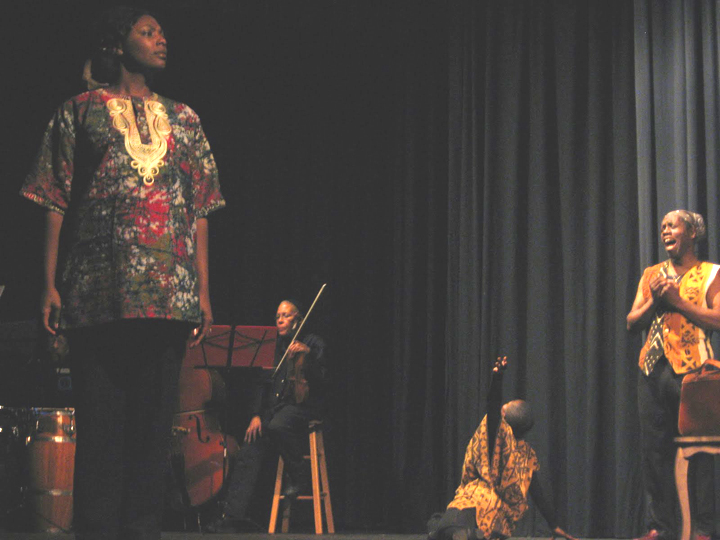 All the actors, when not switching off in the roles, were the chorus. Here the voices lifted and soared as the band played: William Crossman, playwright, on piano, Lewis Jordan on baritone saxophone, India Cooke on violin, Henry Mobley on string bass, Akinyele Sadiq on percussion, Cheryl Schwartz on tenor saxophone.

Linda Johnson danced; as it was a small stage and smaller ensemble, her presence added a nice texture to the setting … opening the way before the cast entered the room – just she and the drummer. Dressed in ceremonial white, she tried to get the audience to clap, but they didn’t until she finished.

It was a good thing William made introductory remarks – otherwise we would have missed our cue to recite or sing the four nursery rhymes at the end of each scene or movement. These interludes were led by a very capable youngster who comes out at one point jumping rope.

Will said each evening would be different depending on the audience, which has a lot to do with what happens on stage. The interaction between artist and consumer or patron is a hefty topic for a book.

The East Side production on March 14 will be a lot more intimate, so the interaction heightened to reflect this. Last night, Sister Linda wasn’t getting much love initially, but as she kept coming back – in different costumes telling the same stories: We want freedom, we want justice, we want equality NOW! – the audience began to collect their cues and in the end were on their feet as well.

It made sense that Michael Lange would direct, having written the definitive piece on Nat Turner, in my opinion.

There are two performances left, one Sunday afternoon, March 14, 3 p.m., at the East Side Cultural Center, 2277 International Blvd., Oakland. The last performance on the current schedule is Sunday, April 25, 4 p.m. at the Community Music Center, 544 Capp St., San Francisco.

Bay View Arts Editor Wanda Sabir can be reached at wsab1@aol.com. Visit her website at www.wandaspicks.com for Wanda’s Picks, her blog, photos and Wanda’s Picks Radio. Her shows are streamed live Wednesdays at 6-7 a.m. and Fridays at 8-10 a.m. and archived on the Afrikan Sistahs’ Media Network.