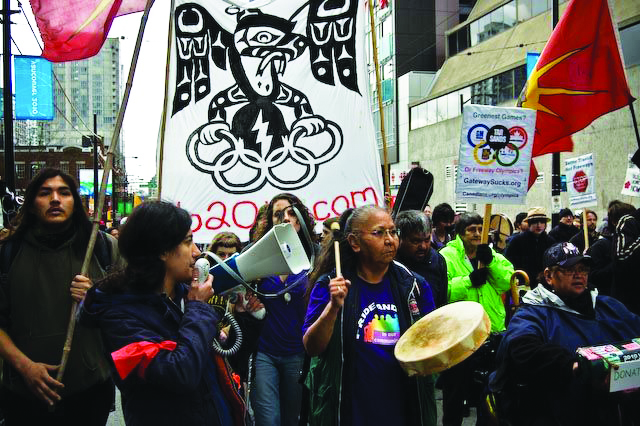 Indigenous peoples are celebrating worldwide after claiming victory over the 2010 Winter Olympic Games. Invaders were warned not to enter our lands and now they are to blame for the “worst Olympic games ever.”

For the first time there is no natural snow in the host Olympic city, which sits on un-surrendered Indigenous territories. More than 20,000 tickets had to be refunded after the cancellation of many events because of no snow. A Georgian luger’s name now stands alongside Harriet Nahanee and millions of other life forms that were killed for the Olympics. The bad outcome can be seen as a small taste to what awaits any investors, companies or civilian invaders* who enter Indigenous territories.

Why we must fight: Indigenous objectives

We fight for land and freedom. The struggle for our lands and way of life remains the exact same as when Crazy Horse, Geronimo, Tecumseh and Tupac Amaru were alive. The only thing different is the minds.

The physical reality is that another group of humans are still imposing their beliefs and will on our Indigenous peoples and lands at gunpoint. Our lands are occupied by invaders, raped for profit, war, entertainment and human comfort. The invaders have not stolen our land. The land is still here – under concrete or not, it remains – and as long as we remain, we will fight to expel all invaders who destroy or seek to destroy it.

The invasion and continued occupation of our Indigenous lands is not simply just another issue, it is the root cause of all problems. This occupation of our lands must be the focus of education and discussion.

If you are Native, we need to constantly ask ourselves how do we get the invaders to de-occupy our lands and rid our Mother Earth of these evil parasites. If you are a supporter, you must ask yourself whose Indigenous territory you are illegally occupying and how can you help with the de-occupation of Native lands by invaders?

That should be our focus. If you say you want to help the problems, then address the root cause of what is actually causing the problems, which is this fake man-made colonial system of existence. This is not Canada, America, Mexico or any other fake European neo-colonial country. Just as our allies worldwide are fighting to expel civilian, industrial and military colonialists from their lands, so are we.

They fear the unity of Indigenous peoples so much, they denied representatives from dozens of Indigenous nations permission to attend the Indigenous Peoples Assembly hosted by the Secwepemc Nation in so-called British Columbia, kkkanada, and the 2010 convergence, all because of a fake line drawn to divide our people. No matter what they attempt, we cannot be stopped.

Our thoughts and prayers helped to make sure there was no snow and the Olympics were a sloppy failure at best. A message to the world was sent: We do not want mining, resorts, dams, power lines, highways, railways, cities, deep sea ports, fish farms, garbage dumps, industrial parks or any invasion, military or civilian, in our lands which cause massive destruction to our territories.

While kkkanada tried to show the world they are our friends, the Okanagan Nation set up a roadblock to defend their lands from logging destruction.

Only an hour away from Whistler, an Olympic venue, sits a new village, Sutikalh, established almost 10 years ago in the mountains of the St’at’imc Nation, to stop a $550-million ski resort from being built in some of the last untouched pristine alpine valleys.

In the Tahltan Nation, a camp has been established to stop Shell Oil from drilling into their sacred lands, the headwaters of three of the biggest salmon bearing rivers left in the world.

The Secwepemc continue their decade-long fight with Sun Peaks ski resort, stopping mining in the headwaters of the Adams River watershed, which is home to the largest sockeye salmon spawning grounds in the Western Hemisphere, as well as protecting sacred burial grounds from trans-Canada highway and CP railway expansions.

The Wet’suwet’en are fighting to stop two major pipelines from being built through their territory, as well protecting their lands from mining and logging.

The Haudenosaunee people, a six nation confederacy of the Seneca, Oneida, Onondaga, Cayuga, Tuscarora and Mohawk, are relentlessly confronting encroachment, destruction and occupation of their lands.

Algonquins of Barrie Lake are fighting to stop logging in their territory and save their water and way of life.

Dene Nation is fighting the largest industrial project in the history of humanity and the most destructive process known to man-kind, the tar sands.

In Grassy Narrows, Anishinabe have been fighting logging for years, halting their operations. In Northern Ontario, Anishinabe are also fighting mining from destroying the still pristine boreal forest.

Lakota, Indigenous people in South Dakota in the so-called united states are continuing the fight for their sacred Black Hills and to stop a kkkanadian mining company from drilling uranium in the heart of Mother Earth.

Indigenous land fighters coast to coast were targeted and harassed by the integrated Olympic security unit – which has unified all military and police forces throughout kkkanada – for years prior to the Olympics. The head of Olympics security is Bud Mercer, the notorious redneck Indian hater who was an ERT (emergency response team) member that tried to blow up Indian people with a land mine. The explosion kicked off a shoot-out which saw the police, including Mercer, shoot an excess of 77,000 rounds of ammunition trying to kill Secwepemc people in their own ceremonial grounds, Gustafsen Lake, in 1995. This was the largest RCMP (Royal Canadian Mounted Police) operation in kkkanadian history.

Fear tactics are of no use. We are over 500 years deep into this resistance. We only continue to get stronger. We will never surrender or fall for their threats, lies or rumors. The man-made empires of the world are collapsing before our eyes. The fall of the white-man’s world is imminent.

We do not seek pity or recognition from the white-man. It is us who have the power of recognition and there is only one thing we recognize, that this man-made system is an enemy of all life and we will never stop fighting until it is rid from our beautiful lands. Our land is not for sale!

We stand in solidartiy with the people and lands the Olympics will be invading next, London and Sochi. We know the resistance will grow. We stand in full alliance with the Indigenous people of Tabasco fighting for their lands and against a massive 2010 colonial celebration in the South.

To the brothers and sisters of the Tuhoe Nation, we send our war cry of unity to all of you fighting and being forced into the illegal white-man’s court. You will be freed.

Drop all charges against JR Valrey. [Charges were dropped Feb. 22. – ed.] To Gloria Arenas and Jacobo Silva, we are elated to hear of your release from behind enemy lines. We demand the same for Leonard Peltier, John Graham, the prisoners in Atenco and Oaxaca, Mumia Abu-Jamal, Russell Maroon Shoats, the Move 9, Mapuche Warriors and all those they fear. We look forward to meeting with you on the battlefield in unity against our collective enemies.

We are Earth’s army. We will not stop until we win. We will never surrender. Warriors Unite.

*Settlers is not a correct term. It is very passive, giving the impression that the occupation of our Indigenous lands is OK, that the invaders’ occupation here is settled, done and agreed upon. But it is not. Current day civilian invaders could still right the wrongs, support Indigenous autonomy. Join the Go Back to Europe Movement. Start a chapter in the area you occupy.

More on the Indigenous land struggle

The Native Youth Movement Society of Warriors defends the un-surrendered mountains of the Northwest. For more information, including videos, visit http://nativeyouthmovement.org/.