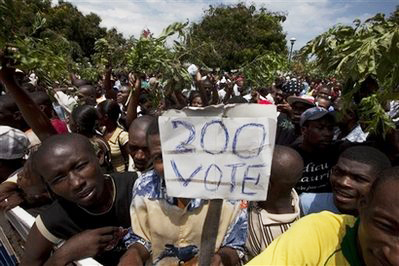 Within days of a Jan. 12 earthquake that devastated much of southern Haiti, the New York Times was using the disaster to promote a United Nations plan for drastically expanding the country’s garment assembly industry, which employs low paid workers to stitch apparel for duty-free export, mainly to the U.S. market. This, according to several opinion pieces in the Times, is the way to rebuild Haiti. [1]

The outlines of the plan were drawn up a year earlier, in January 2009, by Oxford economist Paul Collier, [2] but the leading proponents of development through sweatshops have been liberal Democrats in the United States. Members of the Congressional Black Caucus pushed hard for HOPE and HOPE II, the 2006 Haitian Hemispheric Opportunity through Partnership Encouragement Act and its 2008 extension; these acts make the plan possible by giving preferential treatment to U.S. imports of apparel assembled in Haiti. [3]

U.N. Special Envoy for Haiti Bill Clinton, the former U.S. president, has provided much of the PR for the plan; in the fall of 2009 he organized a special meeting to encourage foreign business investment in Haiti. [4] Liberal U.S. financier and philanthropist George Soros is helping build a new $45 million industrial park near Port au Prince’s impoverished Cité Soleil neighborhood as part of the plan’s implementation. [5]

Adding to the project’s liberal credentials, in August 2009 Bill Clinton made Dr. Paul Farmer his deputy U.N. special envoy. Harvard professor Farmer is widely respected for his medical work in Haiti; he is a founder of Partners in Health/Zanmi Lasante and is on the board of directors of the Institute for Justice and Democracy in Haiti (IJDH), a U.S.-based left-liberal advocacy group. [6]

The fall of the maquiladoras

The plan’s liberal supporters sometimes admit that assembly plant jobs may not be the very best type of employment. But Haitians need work, they say, and the new sweatshops will create jobs – as many as “several hundred thousand,” according to Professor Collier’s description of the plan. What the liberals don’t explain is where they think the jobs will come from.

The garment export industry in the Caribbean Basin has been in a sharp decline for the past five years. The current round of jobs losses in the region’s apparel maquiladoras – the Spanish name for the assembly plants – started with the growth of competition from industrial powers like China and has intensified with the economic crisis in the United States, the main market for the industry’s products.

The Dominican Republic, Haiti’s closest neighbor, lost 73,000 garment jobs from 2005 through 2007, according to an informative article by Marion Weber and Jennifer Blair in the July/August 2009 NACLA Report on the Americas. The six countries that signed on to the 2005 Dominican Republic-Central America Free Trade Agreement (DR-CAFTA) – in addition to the Dominican Republic, the U.S.-sponsored trade zone includes Costa Rica, El Salvador, Guatemala, Honduras and Nicaragua – saw their combined exports fall from a 13.3 percent share of the U.S. import market in 2004 to 9.8 percent in 2008. [7]

In Honduras, site of Latin America’s most recent coup d’état, textile and apparel production for the first six months of 2009 was down by 17.9 percent compared to the same period the year before. The Honduran maquiladora sector lost 15,000 jobs in 2008 and about 8,000 in the first eight months of 2009, leaving it with some 114,000 employees.

By September 2009 Guillermo Matamoros, a leader in the Honduran assembly industry, was giving up on apparel and pushing a new type of maquiladora: call centers and software centers in the north of the country, which he said could generate 25,000 to 40,000 new jobs because of the large number of Hondurans who are bilingual in English and Spanish. [9]

Of course, the U.S. market for imported apparel is expected to grow back if the economic crisis recedes, but it’s hard to see how that by itself would produce several hundred thousand new jobs for Haiti. 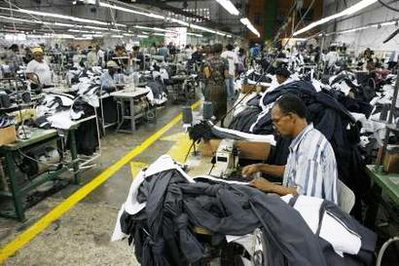 People in the United States tend to think irrationally about things like job creation. Many of us believe that immigration reduces the number of jobs available for U.S. citizens, while the same people often swallow the idea that building new industrial parks in Port au Prince will magically create jobs for Haitians.

The reality is exactly the opposite. If Haitian immigrants were stitching garments in New York or Los Angeles at jobs with standard wage rates, they and their dependents would be able to pay for decent housing and staples like food and clothing. This would stimulate job creation, and the new jobs would make up for the jobs the immigrants had taken – as in fact happened in the past when the United States produced its own apparel in union shops.

But if the same Haitians work in assembly plants in Port au Prince or in the FTZ near the Dominican border in Ouanaminthe, they have to accept wages at about 1/20th the rate they would get in the United States. These workers are barely able to scrape by; their spending can do little to stimulate job creation either in Haiti or in the region as a whole.

But the U.N. plan isn’t really about creating jobs; it’s about relocating them. The key, according to Professor Collier, lies in Haiti’s “propitious fundamentals” – its “poverty and relatively unregulated labor market” and “labor costs that are fully competitive with China.” Add Haiti’s location near the United States: It’s “on the doorstep of its market.” Haiti is the “only low-wage economy in the region,” Collier writes, meaning that the maquilas in nearby countries just can’t compete with Haitian factories paying a minimum wage of around $3.05 a day, approximately half the minimum in the Dominican FTZs. [10]

So when the professors and politicians say they will help Haitian workers by giving them jobs, what they really mean is that they plan to take the jobs away from Dominican, Mexican and Central American workers – and pay the Haitians even less for doing the same work. It’s no wonder that the American Apparel and Footwear Association (AAFA), a U.S. manufactures’ organization, hopes to “play a responsible and proactive role in Haiti’s overall recovery.” [11]

Rerunning the race to the bottom

The jobs the Haitians will get are only temporary, in any case. Haitian workers have been through all this before.

Haiti pioneered export-based development plans in the 1970s under Jean-Claude Duvalier (“Baby Doc”). Once assembly plants started operating in Haiti, other parts of the region followed suit under the Reagan administration’s 1984 Caribbean Basin Initiative (CBI). The brief boom in the Caribbean apparel industry ended when jobs started going to Mexico because of the 1994 North American Free Trade Agreement (NAFTA).

Mexican workers became still more “competitive” after 1994, thanks to an economic crisis and a currency devaluation (a de facto wage cut). The Mexicans in turn lost jobs to lower-paid Chinese workers as the new millennium started. Dominican and Central American manufacturers responded with DR-CAFTA and, predictably, more wage cuts. And yet the job losses have continued. [12]

When the professors and politicians say they will help Haitian workers by giving them jobs, what they really mean is that they plan to take the jobs away from Dominican, Mexican and Central American workers – and pay the Haitians even less for doing the same work.

Anti-sweatshop activists Barbara Briggs and Charlie Kernaghan used to warn back in the 1990s that this type of “economic development” would create a “race to the bottom” in which workers in different countries would have to compete by accepting lower and lower wages. And that’s exactly what happened.

Haitians have learned not to listen to people like Professor Collier and Special Envoy Clinton. In August 2009 thousands of Haitian sweatshop workers went on strike to demand a higher minimum wage. They ignored arguments that they needed to keep their wages competitive – it took tear gas and U.N. troops to get them back into the factories. [13]

Grassroots organizations meeting in Port au Prince since the earthquake have been working on proposals for rebuilding Haiti through a sustainable development plan rooted in Haitian reality. “Not more of the same,” Camille Chalmers of the Haitian Platform to Advocate Alternative Development (PAPDA) said in late January, “but something really alternative and popular.” [14]

Maybe it’s time to listen to the Haitians for a change.

[7] Marion Werner and Jennifer Bair, “After Sweatshops? Apparel Politics in the Circum-Caribbean,” NACLA Report on the Americas, Vol. 42, No. 4, July/August 2009.

David L. Wilson is co-author, with Jane Guskin, of “The Politics of Immigration: Questions and Answers” (Monthly Review Press, July 2007) and co-editor of Weekly News Update on the Americas. He was in Port au Prince to interview Haitian activists about the U.N. development plan when the earthquake struck on Jan. 12. This story first appeared in Monthly Review.

PULLQUOTE: When the professors and politicians say they will help Haitian workers by giving them jobs, what they really mean is that they plan to take the jobs away from Dominican, Mexican and Central American workers – and pay the Haitians even less for doing the same work.